Uri Avnery is an insightful observer of the Israeli scene and Judaism in general. In a recent column, he notes that the early Zionists were anti-religious, at least partly because prominent orthodox rabbis were anti-Zionist. But David Ben-Gurion subsidized “a few hundred” Yeshiva students so they could spend their time studying rather than working or joining the military. Now, these “Torah-shielded parasites”  “constitute 13% of the entire yearly crop of those liable to the draft. Moreover, 65% of all Orthodox male citizens do not work at all and live on the public purse.” 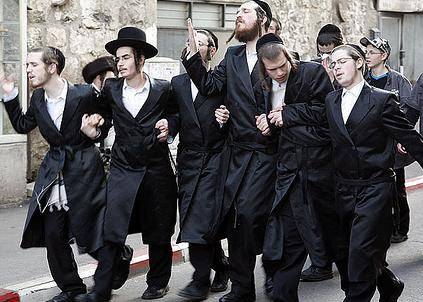 Photo from article on U.S. State Dept. Report criticizing Israel for favoring Orthodox sects (see below). Note the very close social bonds and close physical resemblance among these young men. This doubtless reflects their close genetic relatedness, their similarities accentuated by their common dress. It's an excellent one-picture-is-worth-a-thousand-words snapshot of traditional Jewish collectivism that has become politically and culturally dominant in Israel.

However, a small group of nationalist religious Jews were also encouraged by Ben Gurion. This group has prospered as well, giving rise to Gush Emunim (“the Bloc of the Faithful’), “the ideological core of the settlement movement. Nowadays this camp is directed by Rabbis whose teachings emit a strong odor of Fascism.”

This trend toward fascism is more pronounced because these two religious groups have grown together ideologically over the years, so that “the two factions are very close to each other today and together constitute an Orthodox-national-religious bloc. Indeed, the Orthodox have now become much more nationalist: “The youngsters of the Orthodox faction are seduced by the nationalist melody, unlike their fathers, for whom Israel was just like any goyim-state to be milked.” (The latter comment on the mentality of diaspora Judaism, which would be seen as egregious anti-Semitism if written for an audience in the diaspora, presumably reflects the critique of diaspora Judaism common among secular Zionists of an older generation. [Avnery was born in 1923 and came to Palestine in 1933.])

Avnery sees this new religion as unprecedented in Jewish history: “The Jewish religion in Israel is a mutation of Judaism, a tribal, racist, extreme nationalist and anti-democratic creed.” I rather doubt this, on the basis of other work. For example, the premise of  Shahak & Mezvinsky’s Jewish Fundamentalism in Israel is that this is exactly what traditional Judaism was, and this fits well with the group evolutionary strategy idea. See my summary here, p. 9ff. As they note, there are strong continuities between traditional Jewish communities and contemporary Jewish religious fundamentalism in Israel: “Present day fundamentalists attempt to re-create the life of Jewish communities before the Enlightenment (i.e., prior to about 1750).”

But in any case, the result of religious education, whether national religious, Orthodox, or Shas (i.e., Sephardic–Rabbi Yosef Ovadia’s group—he of the notorious “Goyim were made only to serve us” comment) is that

all three [religious educational systems] are financed by the state at least 100%, if not much more. The differences between them are small, compared to their similarities. All teach their pupils the history of the Jewish people only (based, of course, on the religious myths), nothing about the history of the world, of other peoples, not to mention other religions. The Koran and the New Testament are the kernel of evil and not to be touched. The typical alumni of these systems know that the Jews are the chosen (and vastly superior) people, that all Goyim are vicious anti-Semites, that God promised us this country and that no one else has a right to one square inch of its land. The natural conclusion is that the “foreigners” (meaning the Arabs, who have been living here for 13 centuries at least) must be expelled — unless this would endanger the Jews. 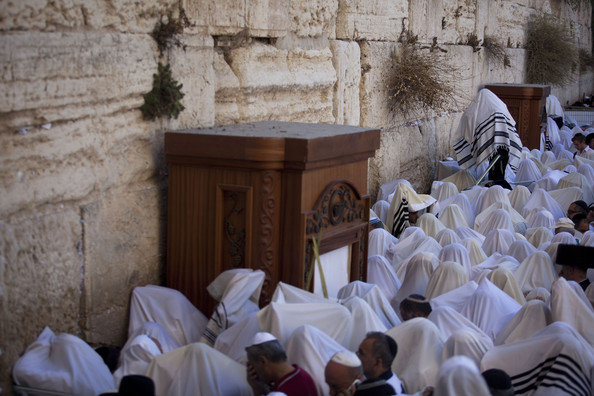 Ultra-orthodox Jews cover their heads with a prayer shawls beside the Western Wall during ceremonies for the Blessing of the Priests, or 'Birkat Cohanim', on October 5, 2009.

Surprisingly perhaps, the US State Department has criticized the Israeli government favoritism toward the Orthodox, commenting that “government discrimination against non-Jews and non-Orthodox streams of Judaism continued.” The report criticized the Orthodox monopoly over marriage, burial and conversion.

Nevertheless, these groups are the demographic engine of Israel and of Judaism in general, and there is absolutely no reason to suppose that criticism by the US government will have any influence on Israeli policies toward the Orthodox any more than it has on West Bank settlements.

Avnery notes that the Orthodox have 5-15 children per woman. As always, demography is destiny. Avery suggests that the government effect a separation of religion and state, but at this point that is a political impossibility. In the future, it will be even less of a possibility.

Absent external factors, the logical prediction is that the reality of Israel as a racialist, expansionist, religiously fanatic ethnostate will be more and more difficult to gloss over—even for the aggressively pro-Israel media and for politicians subservient to the Israel Lobby. And the knee-jerk support for this entity by the organized Jewish community and the vast majority of Jews throughout the West must inevitably expose the glaring hypocrisy of the support by this elite group for massive non-White immigration and all things multicultural throughout the West.