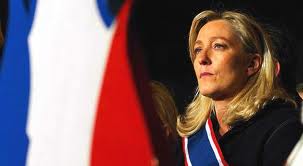 Coming on the heels of visits to Israel by Geert Wilders and a delegation of other luminaries of the European anti-Muslim right, Adar Primor of Ha’aretz interviewed Marine LePen, the daughter of Jean Marie LePen and likely the next leader of the National Front (“The daughter as de-demonizer”). Like the other European anti-Muslim politicians, Marine LePen claims no animosity toward Jews, but the interviewer, Adar Primor, is clearly suspicious—unwilling to remove the “mark of Cain” that all European nationalist politicians inherit as the result of the centrality of the Holocaust in the contemporary European political landscape. Nevertheless, her views, particularly on Israel, set her apart from the other notables on the European right.

The good news is that LePen is getting a lot of publicity in the mainstream French media: Her “smiling face … adorns the front of the prestigious weekly L’Express …. She’s seen everywhere. On France’s television screens, in its newspapers, at party conventions, on billboards.”

The party is expected to get up to 27% of the votes in the 2012 presidential election. LePen claims that a majority of the supporters of Sarkozy’s party agree with her views. “For the first time in the history of the National Front, the political establishment is not uniting against us, but is running after us.” The establishment is getting the message:

“They’re afraid,” was more or less the headline of an article recently published in Le Monde. “They” are both the left and the right. According to one school of thought, “We must not surrender to the agenda she is dictating for fear of increasing her popularity”; according to another, “It’s impossible to ignore the problems she raises that are preoccupying the French.”

A Daily Telegraph interview quotes a French political analyst who notes that “The French no longer only see the FN as an extreme-Right party but as a populist and popular party transcending the Right and Left.”

LePen is quite explicit in her opposition to “the flourishing of radical Islam that refuses to accept the laws of the French republic.” In the Daily Telegraph interview, she sketches a position quite similar to Geert Wilders:

“The progressive Islamisation of our country and the increase in political-religious demands are calling into question the survival of our civilisation. … We are fighting against Islamism, not Islam. … Islamism is the will to impose Shariah for all as civil, political and religious law. … In reality, it’s asking French people to increasingly submit themselves to the Muslim religion. That goes totally against the secular principles of the French republic.”

She mentions particularly public displays of Islam—closing streets for high-decibel prayer meetings and women wearing head scarves in lieu of the recently banned niqab and burka.

Like Wilders, her objections to Islam are not phrased in terms of seeing them as racial aliens but as unwilling to conform to secular French culture. Distancing herself from the BNP, she claims the National Front is “neither racist nor xenophobic but simply a ‘patriotic’ party.”  Islam is fine but Islamization is not. France is “one of the least racist countries in the world. People aren’t judged here according to their color or their religion, but according to their qualities.” Like Wilders, LePen comes across as a libertarian who advocates a meritocracy, abolishing affirmative action, and evaluation on the basis of individual qualities rather than group membership. 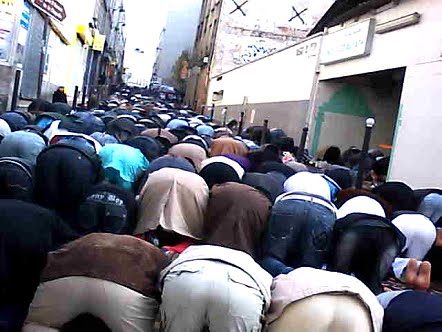 Muslims pray in the streets of Paris

She suggests that the rightist politicians making pilgrimages to Israel are trying to beef up their image at home. (I agree.) But unlike the others, she has not attempted to appeal to the Israeli settlement movement: “I consider it a political mistake and would like to make it clear in this context that we must have the right to criticize the policy of the State of Israel — just as we are allowed to criticize any sovereign country — without it being considered anti-Semitism. After all, the National Front has always been Zionistic and always defended Israel’s right to exist.”

Indeed, she is not at all shy about criticizing Israel. She rejects the recent rabbinical ruling calling on Jews not to rent to Arabs. And she notes that Israeli rhetoric on immigration and multiculturalism is far more extreme than what is acceptable in France:

If we were to say in France a thousandth of what they say in Israel on the subject, we would immediately be thrown into prison for incitement to racial hatred. In practical terms, the country must adopt a preventive and effective immigration policy, which would include putting the employers of foreigners on trial and imposing heavy fines on them. You also have to implement the idea of national preference, and abolish all the incentives that attract migrants, for example social welfare, education for the children, health and housing services.

LePen seems to realize that the National Front is not going to get the support of Jews either in France or in Israel. Indeed, the Israeli government has prevented her from visiting, and the French Jewish community has also rejected her overtures and her pledge to “turn over a new leaf” by rejecting her father’s statements on the Holocaust and other aspects of history. (In 2005 she almost left the party when her father claimed that “the Nazi occupation was not particularly inhumane.”) Present and former leaders of the organized Jewish community in France worry that she is more dangerous than her father because she is more likely to appeal to mainstream moderate right voters. 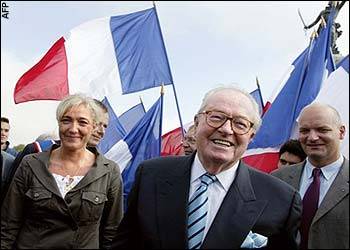 As with the other European anti-Muslim politicians, there are a tiny number of Jews who support LePen: The Jewish Defense League, the followers of Meir Kahane whose main concern is Muslim attacks on Jews. Indeed, the situation in the Netherlands has deteriorated to the point that the former EU commissioner, Dutchman Frits Bolkestein, “declared that the Jews in his country have to emigrate to Israel or to the United States because it is no longer possible to protect them.”

Given the lack of Jewish support, she has opted to take a position on Israel that is well within the European mainstream by emphasizing how intolerant and racist the country is. Such rhetoric fits in well with EU criticism of the Netanyahu government, the settlements, and the Gaza embargo and should resonate with French voters.

Her comments on anti-Semitism also suggest someone trying to appeal to mainstream non-Jewish voters. She claims that there is no anti-Semitism among the native French, that Jews are Frenchmen, and that French Jews should not emigrate to Israel. Muslim anti-Semitism stems from the Israeli-Palestinian conflict. But the Jews are not the only victims of Muslim attitudes: “There are entire regions where it’s better not to be a Jew, a woman, a homosexual or even an ordinary white Frenchman.”

Finally, LePen is not willing to grovel on the issue of French responsibility for the Vichy regime of WWII. “I don’t intend to speak badly of my country. … It was not France that was responsible, and not the French state, but the regime. I also object to constant and systematic mea culpas. We have to accept our country as it is, with its good and bad moments, with its periods of magnificence and its less glamorous periods, with the failures and the mistakes, with the dramas and the unfortunate events. French history is very long. Fairness requires that it be treated as a whole, and not be sliced like pieces of salami without any connection, in order to try to look better politically.”

Primor, the Israeli interviewer, sums up his impression: “She is torn between her wish to create a new, decent image and her inability to disassociate herself from her party’s anti-Semitic old guard.”

It’s not clear where he got this from. Certainly it’s not anything she said—unless the unwillingness to grovel on the Vichy issue constitutes anti-Semitism. Indeed, the article quotes the Jewish philosopher and public intellectual Alain Finkielkraut, “the anti-Semitism of the far right is finished. Le Pen is anti-Semitic, but his daughter is definitely not.”

Marine LePen exemplifies the trend toward European nationalist anti-Muslim parties to provide at least a veneer of philosemitism. As with Geert Wilders and the others, the National Front will get no help from Jews.

I suggest that her comments on Israel may be more politically astute than the strategy of attempting to make an alliance with the Israeli far right—a strategy that has not changed the attitude of the organized Jewish community either in Israel or the Diaspora. Her positions are entirely compatible with the official EU opposition to settlements in post-1967 areas occupied by Israel, including East Jerusalem. Recently the EU envoy’s report reiterated “the EU’s commitment to the two-state solution with an independent, democratic, contiguous and viable Palestinian state, comprising the West Bank, including East Jerusalem, and Gaza, living side by side in peace and security with the State of Israel.”

The rise of the National Front and the other European nationalist parties is a huge breakthrough for the movement to reestablish a sense of European culture and eventually European peoplehood. It’s obvious that Muslims will never become the good liberal republican Europeans that LePen says she wants them to be. As a result, the success of these parties means that Europe would have a renewed sense of cultural identity.

Moreover, success of these parties would embolden anti-immigration sentiment throughout the West, including countries like the United States whose main immigration problem stems from the failed states of Latin America rather than Islam. There is much to be said for the slippery slope argument that once Muslims are successfully targeted as unassimilable, Europeans and other Westerners will realize that other groups, such as African-derived peoples, Latinos, and Asians, have not been successfully integrated either. One can easily see the anti-immigration movement snowballing as Europe develops a renewed sense of cultural identity and confidence. (see here.)