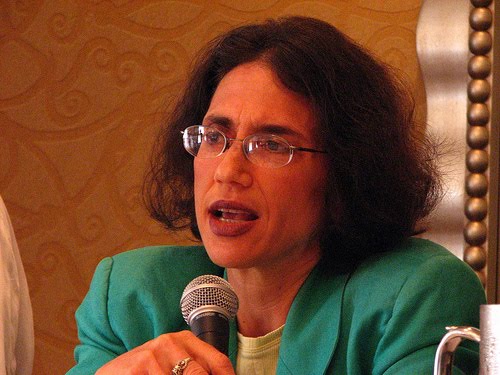 Jennifer Rubin, the Washington Post’s neocon blogger, is very upset. According to Rubin, an article by the notoriously anti-Semitic Time Magazine claimed that “Jews only care about money.”

Wow! To think a very mainstream liberal publication would publish such a thing. Surely concentration camps for Jews cannot be far behind.

So I thought I would check the Time article just to actually comprehend the evil myself.

Here’s the offending passage, from “Why Israel Doesn’t Care About Peace,” by Karl Vick:

As three Presidents, a King and their own Prime Minister gather at the White House to begin a fresh round of talks on peace between Israel and the Palestinians, the truth is, Israelis are no longer preoccupied with the matter. They’re otherwise engaged; they’re making money; they’re enjoying the rays of late summer. A watching world may still see their country as being defined by the blood feud with the Arabs whose families used to live on this land and whether that conflict can be negotiated away, but Israelis say they have moved on.

In other words, Vick is saying that life is good for most Israelis. Like most people, they are preoccupied with making a living. One might say that they are enablers of the Palestinian dispossession rather than actively beating the drums of ethnic cleansing.

Now I strongly suspect that if true at all, this applies only to a certain segment of Israeli society–surely not the ethnocentric, hyper-religious fanatics that Netanyahu’s government represents.

In any case, one expects such over-the-top fanaticism from neocon publicists like Rubin even as one is horrified that she has a pulpit in the mainstream media. What’s interesting is that Rubin’s diagnosis of anti-Semitism has been accepted by the U.S. State Department. Rubin interviewed Hannah Rosenthal, the State Department’s special envoy to combat anti-Semitism, asking her if the Time article was “over the line.” Rosenthal “said without hesitation, ‘That is absolutely over the line.’ Those types of assertions, she said, ‘are made by people who do not know history or misread history.'”

Now one could perhaps forgive Rosenthal for agreeing with Rubin’s nonsense. After all, she was presumably taking Rubin’s word for what the Time article said. But one would think that an official State Department representative would look up the wording and quickly tell Rubin not to publicize her comment. Obviously that didn’t happen.

Even J Street, the relatively less pro-ethnic cleansing wing of the Israel Lobby, is under suspicion for anti-Semitism. Rubin asks: “Will she advise administration figures not to attend (as former National Security Advisor James Jones did in 2009), this year’s J Street conference if it features groups or individuals who go over the line into anti-Semitism?”

It’s simply bizarre to suggest that J Street might be considered anti-Semitic. It’s a Jewish organization, funded by George Soros. Although J Street does criticize settlement expansion, it states, “Our opposition to settlement expansion does not contradict our belief that ultimately some Jewish settlements and a clear majority of settlers on the West Bank close to the Green Line, and the Jewish neighborhoods in East Jerusalem, will be incorporated within the borders of Israel in return for swaps of equivalent land with the state-to-be of Palestine.”

If that’s the sort of thing that passes for anti-Semitism these days, it’s going to be pretty hard to find  people who aren’t anti-Semitic. But that’s just the sort of bunker mentality that has always characterized the ethnocentric core of Judaism–the same people who are driving the settlement expansion in Israel, dominating the current Israeli government, and supporting them to the hilt in AIPAC.

And Rubin manages to spout all this from a perch in a prestigious outpost of the mainstream media. The real problem for America as a client state of Israel is that people like Rubin can present these ideas with nary a peep from anyone in the political, media, or academic establishment. And that is a really awesome display of Jewish power.