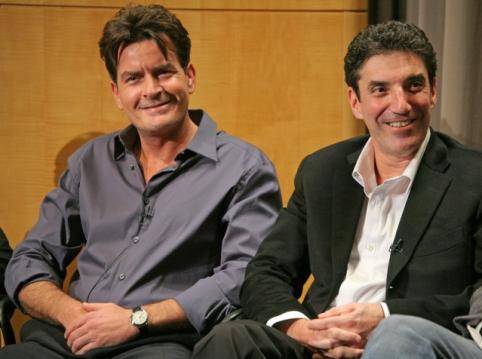 Alas, the news is that fabulously popular actor Charlie Sheen has been canned or at least suspended from his show Two and a Half Men. Though the show has been CBS and Warner Bros. Television’s top-rated sitcom for the season, Charlie crossed the line: He said something construed as anti-Semitic.

It happened in a radio interview with Alex Jones:

In his interview with Jones, Sheen repeatedly evoked violent images and ideas. He also derided [Two and a Half Men producer Chuck] Lorre in an attack that reeked of anti-Semitism.

“There’s something this side of deplorable that a certain Chaim Levine — yeah, that’s Chuck’s real name — mistook this rock star for his own selfish exit strategy, bro. Check it, Alex: I embarrassed him in front of his children and the world by healing at a pace that his unevolved mind cannot process,” Sheen said.

“Last I checked, Chaim, I spent close to the last decade effortlessly and magically converting your tin cans into pure gold. [In a radio interview Sheen claims that Lorre has pocketed a $500,000,000 from the show.] And the gratitude I get is this charlatan chose not to do his job, which is to write,” he said. (See here for the story.)

This is a different kettle of fish from comments by  Rick Sanchez and Marlon Brando on Jewish predominance in the media.  Sheen doesn’t like his producer, and by pointedly calling him by his Jewish name, the implication is that the allegedly evil traits of Chuck Lorre-Chaim Levine stem from his Jewishness. It’s like Mel Gibson’s statement, “Fucking Jews…the Jews are responsible for all the wars in the world.”

Sheen denies any anti-Semitism:  “So you’re telling me, anytime someone calls me Carlos Estevez” — Sheen’s birth name — “I can claim they are anti-Latino?” Predictably, the ADL didn’t buy it:  “We don’t know what he really meant by it. But we’re concerned that, in the midst of a negative tirade, he’s making an irrelevant reference to the guy’s Jewishness. If someone was calling [Sheen] a ‘maggot’ and saying his real name was Carlos Estevez, then yes, that would be conceived as anti-Latino. It’s all about the context.”

It’s okay to say Jews are smart. That will get you major media coverage. But implying something negative about Jews in general is definitely going to bring out the heavy artillery at the ADL.

Sheen obviously has problems of his own.  Wiki tells us, “Sheen’s personal life has … made headlines numerous times, due to marital problems and his various bouts with drug addiction. His role on Two and a Half Men fit well with this image.”

Indeed, the confluence of Sheen’s private life and his TV persona makes him a very effective contemporary icon for dissolute sexual behavior and lack of interest in family and children by young males—the decades-long Hollywood campaign for cultural dissolution. It’s a good example of the general point that the cultural values of the people who script what actors like Sheen portray are dramatically out of sync with the values of most Americans and even more so with traditional American culture.

“The elite was [since the 1960s] and remains disproportionately anti-Establishment in its social and political views and . . . remains so even as a large segment of the American public continues to be ambivalent, or opposed to the new social paradigms” (Powers et al. 1996, 48). Moreover, the social and political messages emanating from Hollywood have been impervious to election returns, and “if anything, the ascendance of conservative politics in Washington may have accelerated television’s leftward tendencies by alarming and mobilizing the predominantly liberal Hollywood community” (Lichter et al. 1994, 418).

The difference between the Hollywood elite and both the traditional elites and the general public is clearest on what Powers et al. term “expressive individualism”—a dimension tapping ideas of sexual liberation (including approval of homosexuality), moral relativism, and a disdain for religious institutions. …

Michael Medved (Is Hollywood too Jewish? Moment 21(4), 1996, 42), who acknowledges that the majority of influential production executives are Jewish, describes the messages emanating from Hollywood as stressing “instant gratification rather than deferred gratification; superficial glamour rather than moral substance; and emotion, instinct, and violence rather than self-discipline and self-control.” He also notes that public opinion polls indicate that “the overwhelming majority of Americans believe that movies and television encourage criminal violence, promiscuous sex, and other forms of destructive behavior.” Medved also expresses his concern that the silence of Jewish self-defense. (See here, p. 87)

Lorre-Levine’s Two and a Half Men certainly fits this pattern.

While Sheen’s behavior is well known, Lorre-Levine is said to have an “acerbic personality” and a long history of not getting along with the people he works with—reminiscent of the portrayal of aggressive, acerbic, and massively egotistical Jewish Hollywood executives in Barton Fink.

Lorre’s acerbic personality has fired at other targets too. He is famous in the industry for “vanity cards” that contain long messages and flash at the end of his shows’ episodes. On one card, Lorre once wrote that critics are so jealous of him, they would probably “eat a hole through their loved ones and crawl through it if it meant they could get my job.'”

In a Fox Sports Radio interview Friday with Pat O’Brien, Sheen said of Lorre and co-creator Lee Arohnson: “These guys are a couple of AA Nazis and just blatant hypocrites…. They just do not practice what they preach; it’s so transparent and so sad.”

One would love to hear exactly what Sheen had in mind by calling them Nazis and hypocrites. Perhaps that the Hollywood addiction to left-liberal cultural values coincides with displays of Jewish ethnocentrism, Zionism, and superiority to non-Jews—a certainly not uncommon pattern. Haim Saban, pillar of the Democratic Party and fanatic Zionist, comes to mind.

[Editorial note: Comments on this article (e.g., Pat Hannagan)  noted that Lorre-Levine posted the following “vanity card” indicating that he is indeed quite ethnocentric–and the product of one of a Jewish family environments that doubtless augured his future as an acerbic Hollywood producer:

I’m writing this vanity card in Israel. I like it here. Not for the geography, or architecture, or even the history. No, I like it because for the first time in my life I’m surrounded with DNA much like my own. Until I got here, until I wandered around Tel Aviv and Jerusalem, I didn’t realize how much my double helix yearned to be around similar strands. Now that’s not to say that I don’t occasionally have that very same genetic experience in Beverly Hills (particularly in Chinese restaurants on Sunday night). But the sheer homogeneity of Israel overwhelms any over-priced kung pao gathering at Mr. Chow’s. The cop, the cab driver, the hotel concierge, the pilot, the waiter, the shoe salesman, the beautiful girl looking right through me as if I didn’t exist — all Jewish! If I had to sum it up, I’d say the sensation is like being at a B’nai B’rith summer camp that is surrounded by millions of crazy bastards who hate the sound of kids playing tetherball, and all the poor little camp has going for it is pluckiness and nukes. Anyway, I have to believe my visceral and very pleasant reaction is some sort of evolutionary, tribal thing. Some sort of survival gene that makes human beings want to stay with their birth group. Which raises the question, why have I spent a lifetime moving away from that group? How did Chaim become Chuck? How did Levine become Lorre? The only answer I come up with is this: When I was a little boy in Hebrew school the rabbis regularly told us that we were the chosen people. That we were God’s favorites. Which is all well and good except that I went home, observed my family and, despite my tender age, thought to myself, “bull$#*!.”]

In any case, Sheen must have been under the influence of something because it’s inconceivable that anyone in Hollywood now could be unaware of the rules when talking about Jews.  Think Marlon Brando, Mel Gibson, Rick Sanchez.

Perhaps as the star of a very lucrative show, he thinks that he is untouchable, but that may not be the case: “Surely Lorre and his writers are clever enough figure out an “Operation: Off the Rails” story line in which a vibrant and distracting new character is introduced mere moments after Sheen’s Charlie Harper has gone on “an unexpected and indefinite trip to Morocco.” Lorre would probably script a painful and humiliating screen death for his nemesis.

Joseph Sobran famously wrote that Jewish power is unique “in being off-limits to normal criticism,” and that “Survival in public life requires that you know all about it, but never refer to it. A hypocritical etiquette forces us to pretend that the Jews are powerless victims; and if you don’t respect their victimhood, they’ll destroy you” (see here, p. 55).