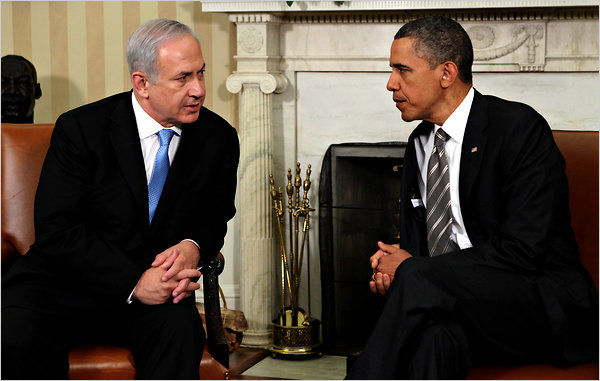 Obama’s speech urging that the 1967 borders be the starting point for Israeli-Palestinian negotiations has been rejected by  Netanyahu in the sort of in-your-face manner that can only mean that the Israeli Prime Minister is absolutely confident that Obama does not have the power to really force Israel to do anything. The LA Times article describes Netanyahu as “infuriated” and Haaretz headlines the talks as “Confrontation.”

But we’ve gone through this before. Tensions have been high between Obama and Netanyahu for over two years, but Israel hasn’t changed its behavior at all, indeed announcing 1500 more housing units in East Jerusalem timed to coincide with Netanyahu’s visit.

Israel’s Fifth Column is predictably outraged. David Horowitz had this to say in an email fundraising letter: “Yesterday morning’s presidential address may well go down in history as the beginning of the end of the State of Israel. Never before has an American President so brazenly embraced the “Palestinian” [notice the quotation marks] cause; never before has an American President so contemptuously pushed Israel into a corner.” His Frontpagemag has an article titled “Obama Throws Israel to the Dogs.”

Obama did this despite dire warnings that it would cut into Jewish funding for the Democrats in 2012.  (“Jewish Donors Warn Obama on Israel,” Wall Street Journal, May19). Since Jews basically fund the Democratic Party (not to mention their influence in the media), this is a major threat indeed. It calls to mind George H. W. Bush’s “one little guy” speech after he threatened a veto unless a $10 billion in loan guarantees was linked to stopping housing construction on the West Bank.  Many believe that Bush’s loss in 1992 stemmed from his attempt to rein in the settlements.

Still, the fact is that Israel will not change its behavior, if only because the internal politics of Israel would not allow it. Ceding large areas of the West Bank with major Jewish settlements to the Palestinians would be political suicide and likely result in a civil war in Israel.

And, as usual, Israel will have far more reliable support in Congress where congressmen know that AIPAC will be a very powerful opponent. Republicans have already indicated that they see this as a way of attacking Obama–yet another indication of the poverty of the two-party system.

So by 2012, it will likely be obvious that Obama’s remarks haven’t really changed things for Israel, with the result that Jews will continue to focus on their domestic agenda of supporting White dispossession via funding and supporting the Democratic Party as the party of ethnic grievance and multiculturalism, maybe with a slight decline from the ~80% of Jews who voted for Obama in 2008. It is possible that defection of some Jews (combined with somewhat less enthusiasm by Jewish donors and Jews in the media) could influence the 2012 election in close states like Florida and thereby have a major effect on the outcome.

Still, the international situation has continued to go against Israel. The Boycott, Divestment and Sanctions movement continues to gain traction. Angela Merkel declared her support for Obama’s comments on the 1967 borders being the basis for talks and has had her own problems with Netanyahu. The EU is likely to back a UN General Assembly resolution for Palestinian statehood.

The most likely consequence of such a declaration of statehood would a unilateral annexation of most of the West Bank by Israel. The U.S. would doubtless allow this to happen, and the diplomatic fallout would gradually recede. The Arab/Muslim world would be more hostile than ever but unable to do anything about it for the foreseeable future.

For Israel, there is no going back.