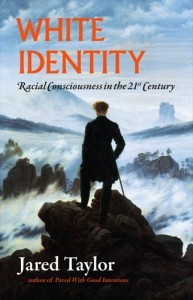 Some time in late 1992 or early 1993, a friend mentioned he was reading Jared Taylor’s new book Paved With Good Intentions. He praised the book for its solid debunking of the racism-made-me-do-it “root cause” of sociopathic Black behavior. It seemed too good to be true. In the back of my mind during our brief conversation I wondered: Jared Who?

The next day I walked a few blocks from my office near the White House and purchased a copy of Paved With Good Intentions at Sidney Kramer Books — the premiere bookstore that catered to D.C.-based policy wonks until it went out of business in the late 1990s. Taylor’s book was prominently displayed as a new release. This well-articulated, iconoclastic view of race relations — a rare surprise from a commercial publisher — remains unsurpassed in dissecting liberal shibboleths on race, civil rights, crime, and affirmative action.

Taylor’s book astutely summarized the problems associated with “diverse” urban districts, which any one familiar with our nation’s capital would acknowledge: higher crime rates, dangerous, underperforming public schools, widespread loitering, the stress and strain of working elbow-to-elbow with affirmative action hires (carrying the workload of incompetent co-workers), and the daily toll of exhausting commutes (50–60 miles one way) in order to reap the benefits of good schools, low crime, affordable homes, and pleasant neighbors.

Two personal vivid examples come to mind: overhearing two young Black women on my commute home candidly brag about how little work they accomplished in the office all day and noticing the empty countertops at the McDonald’s a few blocks from the White House, across from the New Executive Office Building (no napkins, no condiments, no straws, no ketchup, no coffee creamer, no utensils — nothing), which prevented indigent Blacks from hauling off common fast-food supplements. These real-life encounters underscored Taylor’s well-documented pitfalls of “diversity.”

Paved With Good Intentions generated a good deal of publicity. The author appeared on several talk radio programs, including the popular David Brudnoy show. Discussing race relations on CNN’s “Crossfire,” guest host Bob Beckel accused Taylor of “inflammatory conclusions” for mentioning the “disturbing trend” of Black jurors who refused to convict Black defendants. Journalists conveniently ignored racially biased jury verdicts when the jurors were Black, such as the “not guilty” verdict in the O.J. Simpson trial, while the media saturated the airwaves with sensationalized coverage when cops were found “not guilty” of police brutality charges by White juries.

Taylor’s latest book White Identity: Racial Consciousness in the 21st Century is a sequel of sorts to Paved With Good Intentions. Readers with high blood pressure are warned: consult with your physician or pharmacist before reading this book. The late Terry Anderson’s admonition to his radio listeners: ‘if you ain’t mad, you ain’t paying attention’ aptly applies to readers of White Identity.

Taylor scrutinizes the conventional platitudes of race relations with a cache of supporting evidence. The mantra that “diversity” is a source of “strength” is thoroughly debunked. In fact, a major theme of White Identity is that ethnically homogeneous societies, such as Japan and Iceland, are far more stable — less crime, more civic participation, and less internal strife and conflict — than ethnically diverse societies. Group competition contributes to more friction and discord in ethnically diverse societies.

Another major theme that Taylor hammers home is the lack of explicit racial consciousness on the part of Whites. This is arguably the cornerstone of Taylor’s latest work. As a group, unlike other racial or ethnic groups, Whites suffer from a unique disorder: ‘Group Identity Suppression Syndrome’ (GISS), which other races or ethnicities lack. Whites cluster together and prefer their own company in civic clubs, churches, pastimes and sporting events (e.g., NASCAR races), beach vacations, and other leisurely pursuits in ways in which other ethnic groups would more forthrightly embrace their kinship connection.

I remember the candid, well-lubricated reaction of a Pennsylvania businessman settling a bill at a resort bar on the Outer Banks and noting how pleasant it was to spend two weeks vacationing in an area with so few Blacks — bicycles and beach gear left unsecured and unbothered outside; not worrying about the prospect of random attacks during beach walks at night; teens free to roam without the perils of rapists and robbers; and the relative ease of making one’s way through a crowded but orderly supermarket standout in stark comparison to the urban violence of flash-mob thefts and assaults.

Large numbers of Whites live a surreal existence that largely insulates them from enduring the risks of urban violence. Even “integrated” communities, such as Columbia, Maryland, offer some escape for affluent Whites seeking a buffer from the disruptions of neighboring villages deemed “too diverse” for a safe family environment. Pockets of ethnic and racial clustering persist in areas believed to be thoroughly integrated; Whites continue to have closer associations with fellow Whites, Blacks with fellow Blacks, Asians with fellow Asians, etc.

The big difference is that ethnic and racial minorities are permitted to form racially conscious associations. Blacks in Government (BIG) is a prominent organization founded in the mid-1970s by Black civil service employees and offers national workshops to Black professionals in federal, state, and municipal jobs. Imagine the uproar if an organization (even if open to all races) titled Whites in Government existed. Such an organization would be deemed “racist” and unhealthy for a “diverse” society.

Nothing better illustrates the political dynamics of “implicit Whiteness” as the rise of the Tea Party. Rank and file Tea Partiers are overwhelmingly Caucasian (some 89 percent according to CBS News poll), which caught the attention of Alternet’s Rich Benjamin

The simmering movement is the Whitest phenomenon on the national scene, evident not just in the millions of Caucasians committed to its cause, but in the bedrock beliefs stirring its anti-government contempt.

How fitting, therefore, that Sarah Palin keynote the movement’s first organized confab. Neglected in all the fevered conversation around the movement’s meteoric rise, and Palin’s selection, is any useful reflection on what the cause and this figurehead stand for: White racial resentment. Packed beneath her beehive is a spitfire brew of optimistic, yet aggrieved, Whiteness. Palin embodies a bizarre, sometimes alluring, combination of triumph and complaint that many Caucasian Tea Partiers identify with through and through.

Deciphering the racial codes on the movement’s ubiquitous placards does not require a doctorate in semiotics. One popular sign shows the president’s face and a caption: “Undocumented worker.” Another combines Obama’s image with this caption: “The Zoo Has an African Lion and the White House Has a Lyin’ African!”

The only people who are not supposed to recognize their own group interests are Whites organized and drawn together implicitly as Whites for their common interests and endeavors. The long-term implications of this are staggering. How many more majority-White ruled countries, like Rhodesia and South Africa, will expire as a result?

This book will have been a success if at least a few readers become open to the possibility that the following statements are true: People of all races generally prefer the company of people like themselves. Racial diversity is a source of conflict, not strength. Non-Whites, especially Blacks and Hispanics, nurture a strong sense of racial pride and solidarity. Whites have little sense of racial solidarity, and most Whites strongly condemn any signs of it. Immigration from non-European countries is changing the United States in profound ways, many of which Whites find disagreeable. To the extent that these statements are true, they have serious implications both for the country as a whole and for Whites as a group.

A major difference between the twenty-year publication gap of Paved With Good Intentions and White Identity is the grip of political correctness and censorship that besieges major publishers. Two publicists attempted to place Taylor’s manuscript with numerous publishing houses — some 30 or 40 publishers rejected the manuscript — and couldn’t find a single publisher that would publish it. If White Identity had been a ‘Critical Race Theory’ study that applauded “diversity” and criticized White “racism,” major publishers or certainly any number of university presses would have published Taylor’s manuscript. However, for an author whose work was published by a reputable, commercial publisher and nearly 20 years later this same author could not find a publisher for a well-written sequel speaks volumes about bias and openness in the publishing field. There’s no question that had the manuscript’s orientation to race been more conventional, it would have easily been accepted by a major publisher.

Publishers are rejecting well-written manuscripts, supported with hundreds of endnotes, that 50 years ago would have been uncommon. If we lived in an openly honest and free society, considering the incisive analysis and quality of writing that defines White Identity, Random House, Simon and Schuster, or Doubleday would have out bid each other to secure the publishing rights of Taylor’s book. Unfortunately we no longer live in such a society.