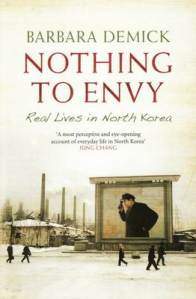 Los Angeles Times journalist Barabara Demick’s examination of life in North Korea won the BBC Samuel Johnson Prize in 2010 and seemingly not without good reason. It takes you on compelling journey into the lives of different North Koreans who have managed to escape the isolated nation’s Communist tyranny to the relative freedom of South Korea. The book offers fascinating insights into what life is like in North Korea and the nature of North Korean culture and religious life.

Most readers will have an inkling that North Korea is a real life Orwellian 1984, but Demick, drawing upon in-depth interviews with escapees and her own observations in the show-capital Pyongyang, demonstrates just how eerily this is the case. North Korean totalitarianism includes, though goes far beyond, the neighborhood informers, labor camps and constant surveillance of regimes such as communist East Germany. As in 1984, the country is divided into a kind of caste system, whereby ‘party members’ are rigorously selected for loyalty; only they are permitted the best jobs or even to live in the capital city. Everybody must display in their house, and regularly clean, a painting of Kim-Il Sung, the eternal leader, and, since his death in 1994, his son and successor Kim Jong-Il. There are regular random inspections to make sure the pictures are up and cleaned and you might end up in a labor camp if they’re not. Forgetting to wear your Kim-Il Sung badge outside the house might result in prison; hair length and appropriate clothing are dictated from on high, and those who fail to cry sufficiently when the president dies are hauled away, suspected of harboring inappropriate thoughts. This is a country where, if you commit a serious crime resulting in execution (such as making a joke about the president), your entire family, including cousins, are hauled off to a labor camp to stamp out the ‘tainted blood.’

The book follows, in a way that grips you like a political thriller, the lives of a number of North Koreans who made the break, mostly from a backwater of a town in the North of the country, near the Chinese border. (As the border with South Korea is the most militarized in the world it is almost impossible to escape across it). North Korea’s elite almost all live in the capital so the very fact of living in this town implies that the book’s main characters – including a female doctor, a female teacher (the majority of defectors are women) and a male school drop-out stunted by famine – are not very high up the hierarchy. Women predominate among defectors because men are more closely monitored in terms of turning up for work everyday [even though the work no longer pays anything]. The women are more likely to work in idle factories, so the authorities care less about whether they turn up. Not turning up to work is a serious crime.

One of this book’s particularly interesting insights relates to the nature of religion in North Korea. Kim Il-Sung was personally influenced by Korean Christianity before he banned it, quite possibly motivated by his desire to model his personality cult on the cult surrounding Jesus, including a miraculous birth, cosmic signs of his birth and other similarities. In addition, North Korean Kim Il-Sung-worship reflects traditional Chinese religiosity in many ways, including the presence of a hereditary caste system. Kim Il-Sung designed the caste system after investigating everyone’s ancestry. Those descended from a Korean War hero are usually high up the hierarchy (and members of the party) while those from the north of the country, or with returning immigrant ancestors, or from South Korea, are low or ‘hostile’ caste. Your caste, officially non-existent but often revealed to you via gossip or otherwise inexplicable failures, has real consequences such as the class star who fails to get into university and whose teacher reveals the real reason to her.

Demick also reveals the human side to people from this isolated state. They are not all cowed. Some are prepared to rebel, if only in quiet ways. A couple, the man of high caste and the woman of low, date secretly for years, taking advantage of the lack of electricity to enjoy walks together in the darkness. This is especially difficult because any kind of public sexual behaviour is frowned upon in North Korea, just like in 1984, as evidencing dangerously strong feelings for something other than the party and its leader.

There’s the doctor who complains about being told not to bother curing her criminal patients and the university student who, gaining knowledge which amazes him from the foreign books he’s allowed privileged access to, works out how to watch South Korean television.

The whole system went into a downward spiral in the 1990s, caused by fall of the Soviet Union which had been propping up the North Korean regime. The result was famine and desperate attempts to fend for itself, one of which was the development of a form of capitalism. Those who did not have a marketable skill during this period simply starved to death. It is amazing to see the ingenious methods the characters, selected from the many she interviewed, used to survive.

The book is written like a thriller, so in reviewing it I am mindful not to give too much away about the individual stories involved. The horrors of the famine and a gradual realization of the lies by which North Korea is held together dawn on the main characters and they decide to attempt to escape. In some cases, they simply cross the river to China in search of food and business opportunities, moving back and forth between the two countries and realizing the extent to which their government has deceived them. This is epitomized by the doctor who stumbles across some white rice and meat in a barn in borderland China only to find a dog barking at her immediately afterwards: ‘She still wanted to believe that her country was the best place in the world . . . But she couldn’t deny what was staring her plainly in the face: dogs in China ate better than doctors in North Korea.’

But they cannot stay in China easily, though some do stay, because it still has some residual loyalty to its fellow-Communist neighbor, even if China has substantially turned to capitalism. In particular, it is no good claiming asylum at a South Korean embassy in China. Accordingly, they have to make their way to South Korea either by flying from China on a fake passport or by making the treacherous desert crossing to Mongolia. It is testimony to the even-handedness of this book that it portrays the lives of the refugees once they are in South Korea in negative as well as positive terms. They experience ‘culture shock,’ in some cases romanticizing the country they have left behind. They are naïve (one of them gets scammed); they owe money to people-smugglers and fall in with criminals; they feel guilt about what may have happened to their families as a consequence of their escape; they dress and speak differently from South Koreans — they are about fifty years behind. Of course, life is superior in the south but it’s still very difficult for them and the book’s final chapters are tinged with a sense of poignancy. This is testimony to Demick’s skill as a writer.

This book is well worth-reading and my criticisms of it are relatively minor. To a great extent, her cultural analysis is what would be called ‘armchair anthropology.’ Demick has never been to the places she describes. She has to rely on photos, videos, and the imperfect memories, and varying degrees of honesty, of interviewees. Demick briefly mentions, at the beginning and in the notes, the problems with this methodology, but notes that she has tried her best to ‘verify’ (almost impossible in a secretive state like North Korea) what her informants have told her. I accept this is journalism, not scholarship, but I think she should have looked in more detail at this problem. She concedes, in her notes, that the book is essentially a work of ‘oral history’. Many popular history books engage, to a greater extent, with the problems with their sources. To her credit, Demick provides a useful reading list in the notes, including her written sources.

The ending of the book is rather clichéd and disappointing. It attempts to be poetic and it fails. Also, as Nothing to Envy introduces significant aspects of North Korean life, it would have been useful to include an index. The inside back cover is almost entirely taken up by a huge photograph of Demick herself. This seemed entirely un-necessary and even a tad egotistical.

But this is the kind of book you want to occupy you on a long haul flight and it will certainly do so. It is a gripping, original and tantalizing examination of the world’s most isolated state and an indictment of Communism.

Dr Edward Dutton researches replacement religions. His books include The Finnuit: Finnish Culture and the Religion of Uniqueness (Akademiai Kiado, 2009).