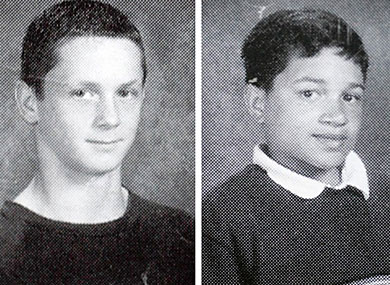 At age 14 Brandon McInerney fatally shot Larry King, age 15  and a fellow student at his high school. The victim was a gay cross dresser who wore high-heeled boots, makeup and jewelry to school, and had made a series of public sexual advances toward McInerney. McInerney, who is not gay and had a girlfriend, took offense at King’s continuing sexual harassment.

According to the defense attorney,  the killing was motivated by McInerney’s “inability to deal with the humiliation of having an openly gay boy flirt with him at school,” which seems reasonable enough. But the prosecution claims that the murder was a hate crime, solely on the basis that McInerney had associations with the “white supremacist movement.”

Investigators say the teenager on trial for the classroom shooting death of a gay student embraced the white supremacist movement. Doodles of swastikas, white power images and books about Adolf Hitler’s SS and an Iron Cross were introduced during Wednesday’s testimony in 17-year-old Brandon McInerney’s trial for the death of 15-year-old Larry King. McInerney is being tried as an adult for murder and hate crime allegations. (Sacramento Bee, July 14, 2011)

Indeed, McInerney had the temerity to avoid “a school field trip to the Museum of Tolerance, the educational arm of the human rights organization the Simon Wiesenthal Center”—obviously marking him as a bad guy.

One obvious issue is how much self-control a child of 14 may be expected to have when being harassed in this way. (Even on the prosecution’s theory, emotional control is critical, since they propose that the killing was motivated by a general hatred toward homosexuals.) The developmental data clearly show that the prefrontal control centers are the last parts of the brain to develop. For very sound evolutionary reasons derivable from the evolutionary theory of sex, young males are especially prone to impulsivity and have difficulty controlling their emotions, including, in this case, anger. What some have called the “young male syndrome” is simply another way of saying that young males are designed to be relatively uncontrolled emotionally. In a nutshell, that is the perfectly reasonable logic of separate judicial systems for adults and children.

In this case, the defense will try to convince the jury that the anger was the result of attacks on his sexual identity—a particularly difficult issue at age 14. Going through puberty is hard enough without having a gay cross dresser blowing kisses at you and loudly proclaiming his love for you (“Love you, baby“) while passing in the hallway. Nevertheless, McInerney not only was charged with first degree murder but is being tried as an adult. He faces the possibility of life in prison if convicted.

It’s obvious that being sexually harassed by a gay student would lead to anger for pretty much any heterosexual teenage boy—or adult. But the prosecution wants the jury to believe that McInerney’s motive had nothing to do with anger at being harassed. Rather it was because McInerney was a “White nationalist” whose hatred against homosexuals motivated the killing.

The prosecution witness who provided the logic of the motive is Dan Swanson, a Simi Valley police detective with no academic qualifications. One suspects that he may have been trained by the SPLC’s  Law Enforcement Training or the ADL’s Law Enforcement Agency Resource Network. Swanson began his testimony with a 3-hour presentation of the “history of white supremacy dating back to the Ku Klux Klan and running through the modern day neo-Nazi movement.” The idea is that Nazis didn’t like gays, so, since McInerney has an association with the symbols of Nazism and “White supremacy,” he must have murdered King out of hatred.

On the face of it, this is a ploy by prosecutors to poison the minds of jurors given current standards of political correctness.  After his 3-hour historical background presentation, Swanson

put on a slide show that outlined the basis of his opinion that listed 25 statements from individuals, three “admissions” from McInerney, and 204 different gang symbols or white supremacy ideologies that were found in McInerney’s backpack or in his home. All told, he said, they speak to the motive behind King’s death. …

What Swanson categorized as admissions included a statement McInerney made to a teacher about shaving his head because he was into white power. Earlier in the trial, that teacher testified she thought he was joking. Another was identifying himself as a member of Silver Strand Locals [said by the prosecution to be a “criminal street gang”] when he was booked into juvenile hall.

Swanson also noted how a drawing of an eyeball emblazoned with a swastika was unique to a famous drawing of a wolf used by the White Aryan Nation. That group supports “lone wolves” striking out on their own to act upon the tenets of white supremacy, one of which is anti-gay. The prosecution has argued McInerney acted as a lone wolf when he killed King.

Amazingly, the judge allowed Swanson to give

So this part of the presentation was basically irrelevant even to the prosecution’s theory. But it was quite effective in producing a negative attitude toward McInerney in at least one juror.

Let’s grant that McInerney was into this stuff. But there are no statements from McInerney linking his attitudes on race or National Socialism with his killing of King. No statements from McInerney declaring a general hatred toward homosexuals. There was no presentation of scientifically gathered data showing how common hatred toward homosexuals is among people with attitudes and associations like McInerney’s—or indeed whether such attitudes are more or less common in the population in general. Surely not all of those with McInerney’s general attitudes on National Socialism and race hate homosexuals. And in any case, the vast majority of those with McInerney’s attitudes do not attack homosexuals.

To deny the relevance of King’s harassment in provoking McInerney is ridiculous. The whole thing seems like nothing more than yet another attempt to criminalize having a White identity and a sense of White interests.

To make matters more difficult for the defense, the prosecution intends to use a “state law allowing judges to admonish jurors that a victim’s sexual orientation should not influence deliberations” (“Trial in killing of gay teen will test new law“; LA Times, 7-21-11). This law is intended to preclude so-called “gay panic” defenses where people claim they victimize someone in an emotional panic when they learn he is gay.

Attorneys for Brandon McInerney argue that their client, who was 14 when he gunned down Larry King in an Oxnard junior high school computer lab, was so humiliated by King’s flirtation that it provoked him to kill his classmate. Gay rights advocates say the argument is a classic “gay panic” defense.”

This just shows how out of touch with reality the law has become. The victim’s gender orientation is obviously relevant to the motive here; McInerney’s anger is absolutely understandable but only if the victim’s sexual orientation is taken into account. If a girl had been making such public declarations of attraction, McInerney probably would have been flattered.

But in fact, the defense will be allowed to present its evidence that McInerney was sexually harassed, and I should think that this material will resonate strongly with most jurors despite what the activists want.

This is a truly despicable attempt to get a first degree murder conviction against a child whose attitudes conflict with the current zeitgeist.  It is completely reliant on guilt-by-association reasoning that taps into the massive indoctrination of the mainstream media on any issue related to White identity, the Ku Klux Klan, or National Socialism. We can only hope that the jury has the courage to ignore this red herring and punish the prosecution by finding him not guilty.