Many of us have experienced the Cold War and identify Russia with communism and authoritarianism, or at least as an ‘Eastern power’ instead of a potential ally of the West. But we should not forget that it was the Swedish Viking-leader Rurik who united the Slavic tribes east of Poland under a dynasty which would last until the Revolution of 1917. It was Czar Ivan IV (the Terrible) who in the 16th century finally broke the Muslim-Mongol power which had been a threat for Europe since the hordes of Ögödei Khan’s arrived in the 13th century. In the following centuries the Russians expanded beyond the Ural mountains which led to the conquest of a large part of the Eurasian landmass and the White dominance over it. It was not until the defeat at the hands of the Japanese in 1905 that the Russian expansion was checked.

The Russian colonization of the northern part of the Eurasian landmass can only be compared to the Anglo-Saxon colonization of North-America in terms of historical significance for the rise of the White race. Both expansions have secured sufficient land mass for Whites beyond the European peninsula to develop a sizeable population to persist. Nowadays, the Russians are as much in demographic and to some extent cultural decay as their Anglo-Saxon brethren on the other side of the Bering Straits. The birthrates are dropping under the replacement level and the lands are prone to immigration from non-Whites. In the case of Russia the threat is twofold – from the Causasian and Central-Asian Muslims and the Chinese. Although Russia has a strong cultural and ethnic awareness, the leadership is not always reflecting popular sentiment.

Lately Dmitry Rogozin, Russia’s ambassador to NATO, has vowed his return to Russian politics. This is very interesting because he was actually ‘exiled’ as an ambassador because the Putinist faction feared his rising popularity among the Russians. Rogozin was the leading man of the nationalist Congress of Russian Communities, which was founded by the deceased general Lebed. 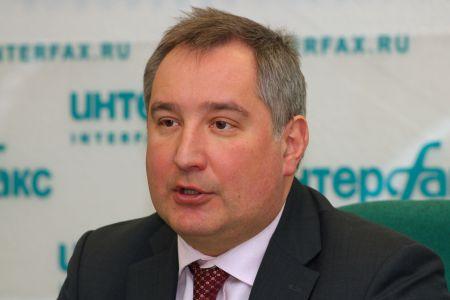 Rogozin has noticed similarities between immigration in the West and the East:

Like the West, Russia has come under unprecedented immigration pressure. Our immigration is not justified in terms of the economy and is extremely dangerous politically and socially.

His vocal opposition against immigration is not merely economic, but also outspokenly ethnically motivated:

Natives of those [North Caucaus] republics defiantly violate the Russian cultural standard. Some peoples in Russia are more equal than others, and the Russian people are now in the position of the discriminated [against] majority.

He calls for the “re-nationalization of the Russian people, re-establishment of the spirit of statehood…and resurrection of historical memory and great Russian culture.”

In 2003 Rogozin became head of the nationalist Rodina [Motherland] coalition. After being forced out of that position, he became involved with the Movement Against Illegal Immigration, “championing the rights of ethnic Russians and organizing nationalist demonstrations.” While head of Rodina, the party put on a television ad starring Rogozin:

The imagery of defending a Russian woman and her baby against foreign men is particularly striking. Imagine a similar ad aired by a US political party directed against immigrants being aired on the major television networks.

The independence of the former Soviet republics in the Caucasus and Central Asia has reversed the ethnic tables. In the Soviet era, it was the Russians who colonized those republics, but now the migration flows are reversed and Russia is being flooded by nationalities from the empoverished former republics. In some way, this is similar to the trend in the West, where colonizing countries were confronted by the influx of immigrants from former colonies in Asia and Africa. In the case of Russia there is actually an even greater peril than the steady migration from the former Soviet republics and that is the influx of millions of Chinese.

Here are the facts: There are 10 million Russians and other minorities in Siberia, while there 100 million people who live on the Chinese side of the border with Russia. Now there are 250,000 legal Chinese immigrants in Russia, but given the above facts there will be more to come. Siberia is the backyard of China and full of resources which China will need for a sustained economic growth. Chinese colonization, whether planned or spontanuous, will jeopardize Russian and subconsequently White dominance of the northern part of the Eurasian landmass. The question is whether America should persist in antagonizing Russia instead of reaching out to check Chinese expansion in East Asia.

Meanwhile Dmitry Rogozin is beating the drum in Russia against immigration, partially based on his experience in the West:

The reason for the failure of multiculturalism in Europe is a result of the reaction to the European Nazism and fascism, which is “another extreme”. It has not been beneficial: Europe’s Muslims are stronger religiously and have more solidarity than the native population.

Rogozin acknowledges that Russia and Europe face the same dangers of immigration and Muslim demographic and cultural expansion. He has dubbed his cause the ‘Russian question’ to define his politics as of historical importance:

This is the first time the Russian ethnic population has begun to mobilize on such a scale and with such intensity since WWII. The Russian question  is the central nerve of Russia’s modern politics. Not only do the country’s stability and integrity depend on the resolution of the Russian issue, but so does the vector of its historic development.

Let’s hope that Rogozin rises to power in Russia—and for the rise of a ‘Rogozin’ in America and elsewhere throughout the West.