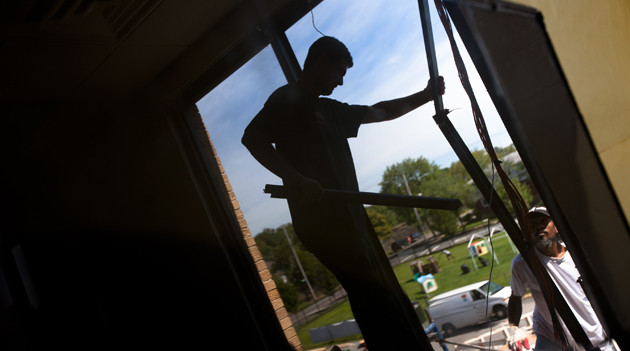 Since 2005, you taxpayers will be pleased to know, you have been paying for the Nonprofit Security Grant Program administered by the U.S. Department of Homeland Security with results so blatantly ethnocentric that even The Jewish Daily Forward has flinched:

A Forward analysis of the 995 grants distributed through the national program from 2007 to 2010 found that 734, or 73.7%, went to Jewish organizations. DHS announced its grants for 2011 in late August, and here, too, Jewish groups were the big winners, with 81% of those awards.

Examining the grants program provides a window into Jewish organizational and political power. It is this power that allowed a small community to create and maintain a government program tailored specifically for its needs and catering almost exclusively to its members…

The legislation and the rules defining eligibility make no mention of preferring Jewish institutions, but in practice the program could easily be viewed as a Jewish earmark.

– supposedly to defend against terrorism, although

In conversations with leaders of dozens of synagogues and other Jewish organizations around the country, the Forward found that combating crime, not preventing terrorism, was the prime motivation to apply for the federal money.

In other words it was actually deployed against American Blacks rather than foreign Muslims.

The Forward is fascinated by the ingenious tricks used to rig the Federal program in favor of Jewish entities:

First, religious institutions are preferred over other not-for-profits… Second, high-risk metropolitan areas are given top priority in the grant process, and those “tier 1” cities — New York, Washington, Houston, Chicago and Los Angeles — have a heavy concentration of Jews…Third, an ambiguous definition of what constitutes a terror threat has enabled many Jewish institutions to make a stronger case than non-Jewish counterparts. The criteria established by Congress and DHS requires not-for-profits to demonstrate that they “or closely related organizations (within or outside the U.S.)” have been subjected to prior threats or attacks by a terrorist network. Taking into account incidents overseas allows Jewish groups to describe their threat level regardless of what is happening in their own communities…filings obtained by the Forward also point to support for Israel as a source of threat.

While impressed by these stratagems, the Forward, true to its leftist and non-observant tradition, is very distressed by the hogging of these grants by another faction: Jewish religious zealots:

The…relatively small sect of Lubavitch Jews received more grants than the entire Reform movement, the largest denomination in the country. Overall, Orthodox institutions were dramatically overrepresented, receiving about 45% of the grants that went to all Jewish institutions from 2007 to 2010.

Should public funds be used to upgrade security at an avowedly religious institution through a federal program whose guidelines give an advantage to those religious institutions? When the Nonprofit Security Grant Program began in 2005, it was not sold to Congress as a Jewish earmark, but it certainly acts like one today, with the vast majority of grants going to Jewish organizations not by accident, but by design…

Orthodox institutions are dramatically overrepresented in the distribution of these grants, with the relatively small number of Chabad institutions receiving more than Reform synagogues, the largest denomination in the country. Partly that’s because Reform’s leaders also expressed serious doubts about the constitutionality of the program; Orthodox Jews are less troubled about that. (My emphasis)

For the rest of us, however, these scruples are respectable but unhelpful. As Kevin MacDonald has repeatedly pointed out, extremists invariably win in Jewish intercommunal struggles. More plundering of the non-Jewish taxpayer can be relied upon.