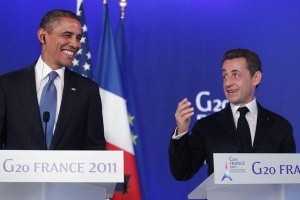 It all started when French President Nicholas Sarkozy was overheard telling Obama, “I cannot bear Netanyahu, he’s a liar.” At that point, in the ADL’s ideal world, Obama would have rushed to the defense of the Israeli leader, insisting on all the wonderful qualities that all Israelis are known to have–honesty, integrity, etc.  Instead, Obama replied,  “You’re sick of him, but I have to deal with him every day.”

The ADL is not pleased. Abe Foxman released a statement:

“We are deeply disappointed and saddened by this decidedly un-Presidential exchange between Presidents Sarkozy and Obama. President Obama’s response to Mr. Sarkozy implies that he agrees with the French leader. In light of the revelations here, we hope that the Obama Administration will do everything it can to reassure Israel that the relationship remains on a sure footing and to reinvigorate the trust between President Obama and Prime Minister Netanyahu, which clearly is not what it should be. What is sad is that we now have to worry to what extent these private views inform foreign policy decisions of the U.S. and France – two singularly important players in the peace process.”

Of course, what Foxman really means is that he has to worry to what extent these private views inform foreign policy decisions of the U.S. and France – two singularly important players in the campaign for war against Iran.

The tension between Obama and Netanyahu is nothing new, coming to a peak in May when Obama talked about the 1967 borders and Netanyahu got his ~30 standing ovations in Congress. Since then, the consensus is that Netanyahu won and Obama lost: The construction of settlements continues unabated, Palestine is not in the UN (although it got into UNESCO with the help of France; the Palestinians have pledged not to apply for any more), and Israel and the Israel Lobby  in the U.S. are gearing up to promote a war against Iran.  There were murmurings that Jews would not contribute to Obama, but, unless this recent flap has legs, that doesn’t seem to be the case.

Predictably, Republicans are hoping that it does have legs. Mitt Romney is already trying to use it to his benefit (Romney seeks to capitalize on Obama-Sarkozy exchange). The reason is obvious:

Romney has been working hard to cultivate support among Jewish voters—and has—and has tapped into a network of Jewish bundlers who backed President George W. Bush and 2008 nominee John McCain. In September, he held a major fundraiser in New York, cosponsored by at least 40 Jewish Romney supporters, each of whom gave $10,000 apiece.

Jewish money is ultimately the reason why the Israel Lobby is invincible in America.

Obama’s remarks indicate that he is under intense pressure from Israel but also suggest that he is a reluctant warrior and perhaps putting up some resistance—as with the settlements on the West Bank and Jerusalem (also true of other Administrations). Perhaps aware that a war with Iran will be a tough sell to the Obama administration, AIPAC seems to be attempting an end run around the Administration with what M. J. Rosenberg terms “AIPAC’s ‘War with Iran’ Bill,’” which has passed the House Foreign Affairs Committee essentially prohibits peace overtures from the U.S. without the explicit agreement of the appropriate committees of Congress. The Lobby has always had much more power over Congress than Presidents.

This is ominous indeed. As Rosenberg notes, the recent beating of war drums by Israel is really designed to get the U.S. to do something about Iran, not to advertise an Israeli strike. This will not be an easy task for the Israel Lobby, but that doesn’t mean they won’t make an intense effort, aided by U.S. partisan politics in which Republicans advertise greater fealty to Israel in return for Jewish financial and media support. Nor can one dismiss the possibility of false intelligence reports–a notorious project of neocons at high levels of the Bush Administration in the run-up to the war in Iraq (see, e.g., here, pp. 47-49). In fact, it would not be surprising if there was a false flag operation against the U.S. that would rally U.S. public opinion in favor of war. In the minds of many (e.g., here), the recent supposed attack by Iran against a Saudi diplomat in the U.S. was exactly that.

The Israel Lobby tends to get what it wants. And it very much wants a war with Iran.