The Iowa  vote is fast approaching, and with a possibility that Ron Paul could come out on top, the media is in full-fledged attack mode. Following pieces in The New Republic, The Weekly Standard, and the LA Times (pop quiz: What do these media outlets have in common?), the New York Times chimes in with “Paul Disowns Extremists’ Views but Doesn’t Disavow the Support,” by Jim Rutenberg and Serge F. Kovaleski. The goal is to link Paul to Don Black, Willis Carto, and, most of all, David Duke. The formula is simple: Start with a couple of old, fairly innocuous  old items from the Ron Paul Survival Report—including a concern about car-jackings by “urban youth” that ends by warning that “the animals are coming”;  and “a lament about ‘The Disappearing White Majority.” It then veers into some writing by Murray Rothbard and Lew Rockwell that did not appear in Ron Paul’s newsletter but has the virtue of linking Paul’s libertarianism with David Duke:

Mr. Rothbard called for a “Right Wing Populism,” suggesting that the campaign for governor of Louisiana by David Duke, the founder of the National Association for the Advancement of White People, was a model for “paleolibertarianism.”

“It is fascinating that there was nothing in Duke’s current program or campaign that could not also be embraced by paleoconservatives or paleolibertarians,” he wrote.

Arguing that too many libertarians were embracing a misplaced egalitarianism, Mr. Rockwell wrote in Liberty magazine: “There is nothing wrong with blacks preferring the ‘black thing.’ But paleolibertarians would say the same about whites preferring the ‘white thing’ or Asians the ‘Asian thing.’ ”

Having laid this “foundation,” Rutenberg and Kovaleski apply the coup de grâce by interviewing Don Black who claims that “the paleoconservatives who think there are race problems in this country” were “a big part of his constituency.”

“We understand that Paul is not a white nationalist, but most of our people support him because of his stand on issues,” Mr. Black said. “We think our race is being threatened through a form of genocide by assimilation, meaning the allowing in of third-world immigrants into the United States.”

Mr. Black said Mr. Paul was attractive because of his “aggressive position on securing our borders,” his criticism of affirmative action and his goal of eliminating the Federal Reserve, which the Stormfront board considers to be essentially a private bank with no government oversight. “Also, our board recognizes that most of the leaders involved in the Fed and the international banking system are Jews.”

A classic guilt by association argument. Don Black  supports Ron Paul and libertarian Murray Rothbard says that some of Ron Paul’s ideas don’t differ much from some of David Duke’s ideas. Therefore, even though Ron Paul may not believe what they believe, the linkage has been made and it is certainly enough to make any self-respecting New York Times reader horrified at the prospect of Ron Paul as president.

Why didn’t we get articles like this in the Times in 2008 when Obama was being linked to Rev. Jeremiah Wright and Bill Ayers? There wasn’t much concern then by the Times or the rest of the MSM that Obama was getting the support of the farthest of the far left.

Despite this being an obvious hit piece designed to terrify the liberal consensus, I suspect that implicit Whiteness is in fact a major feature of Ron Paul’s support. Even a casual glance at Ron Paul activists and the crowds he draws bear this out. His positions on affirmative action, controlling the borders, the Fed, and his lack of support for the agenda of the Israel Lobby should resonate with patriotic White Americans. 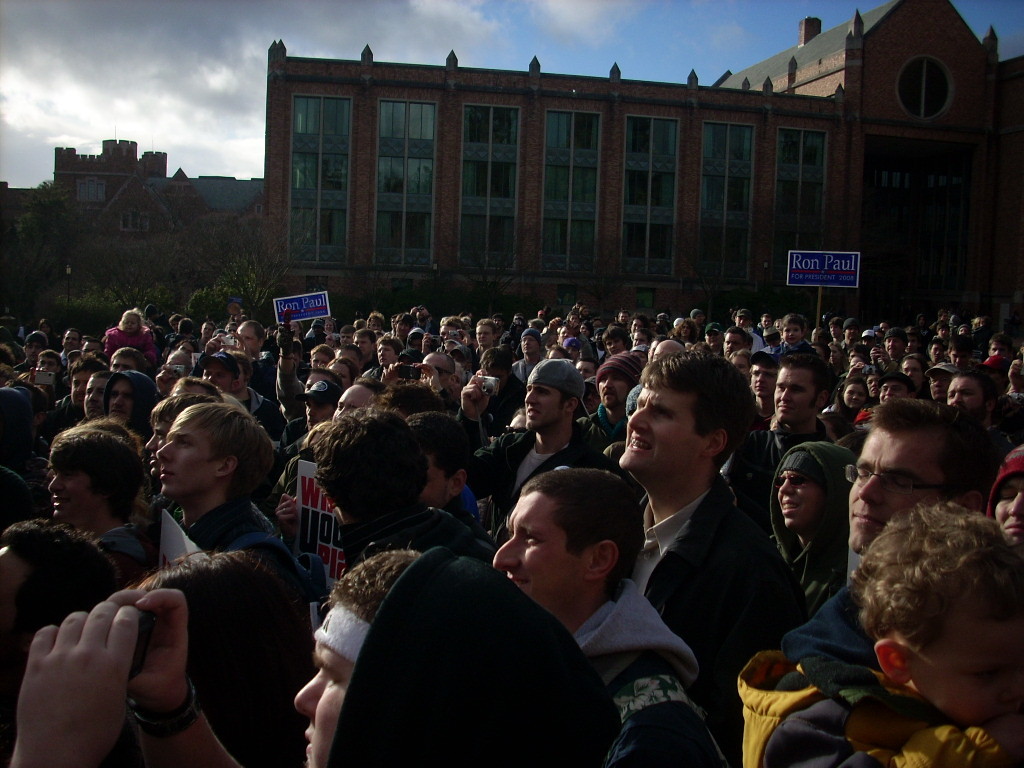 Ron Paul crowd and the University of Washington

I also suspect that the lack of enthusiasm Republicans have with Mitt Romney is precisely because they don’t sense that he is an implicitly White candidate but rather someone who is finding the best way to get elected and who will then carry on the dissolution of White America under the banner of the Republican Party. (And the flag of Israel: Tough question: Who’s more slavishly beholden to the Israel Lobby, Newt Gringrich or Mitt Romney?) The Times did its part by putting out a very positive piece on Romney on Sunday where Romney comes off as the opposite of Paul: No principles but good at solving problems. Definitely someone the Times can live with.

2012 is shaping up to be an ideal year for a third party run. Those with power in the Republican Party will doubtless move heaven and earth to prevent a Ron Paul candidacy but Paul would get substantial support running as a Libertarian, perhaps enough to stick a fork into the Republican Party and take it out of its misery. After all, this is likely the last chance for the Republican Party to win with its coalition of White voters. By 2016, they will probably need at least 75% of the White voters to prevail in a presidential election—an unlikely prospect given how many Whites are plugged into the economic benefits (e.g., as state and federal workers) and the ideology of the multicultural leviathan.

The death of the Republican Party may eventually result in an opening for the American Third Position as an explicitly pro-White party. For 2012, the A3P has nominated Merlin Miller and Virginia Abernethy for president and vice-president respectively. We may not win it this time, but let’s hope the message starts getting out that despite the current state of the media, it’s perfectly legitimate to talk about White identity and interests. And it’s eminently reasonable to lament the disappearing White majority. In his heart of hearts, I suspect that Ron Paul agrees with that.