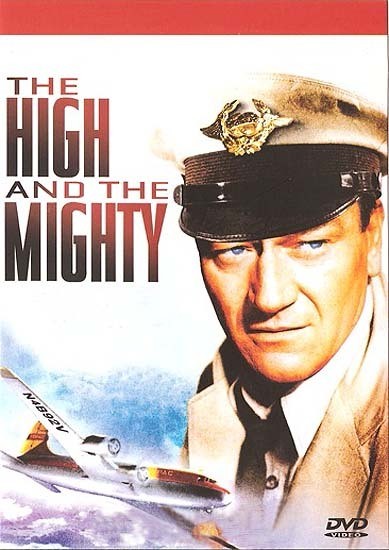 Now comes a truly sardonic confirmation that I am right. A good part of my teaching involves showing the changing images of a high-level American vocation that has not changed much racially over the last century: that of the pilot. Few careers have for so long captivated the imaginations of American boys and men. See Joseph Corn’s wonderful book The Winged Gospel: America’s Romance with Aviation or read anything about flying by the peerless Ernest Gann to capture this romance. Gann’s 1953 novel The High and the Mighty became a film featuring that stalwart American actor, John Wayne.

Or consider the original 1970 Airport. From pilots to navigators to air traffic controllers, it was a White man’s world and they performed heroically (and sometimes romantically).

What is critical about this job is the fact that unlike other upper-middle class occupations such as doctors or lawyers, American commercial pilots have remained overwhelming White and male. Thus, when we watch TV shows such as ER or L.A. Law, the mixture of gender and race among the various casts more or less reflects reality. 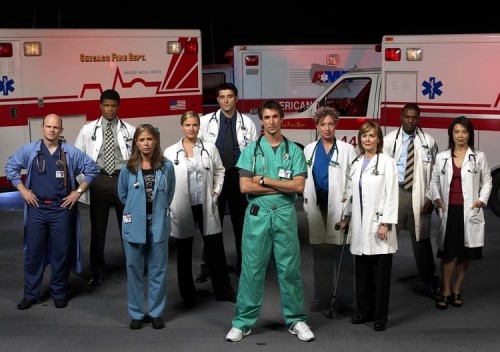 The cast of ER

To introduce a female or Black pilot, however, goes against reality. Over recent decades, the percentage of White male pilots flying commercial airliners in America has remained steady at about 96%. Women, almost exclusively White, comprise roughly 3%, while Blacks remain less than one percent. In this day and age of anti-White government affirmative action programs, it would be a tough job proving that White discrimination is responsible for the low representation of Black pilots.

Sure, the 1995 TV film The Tuskegee Airmen, directed by Robert Markowitz and starring Laurence Fishburne and Cuba Gooding Jr., highlights Black pilots, but the attention that that minor military experiment now receives more or less proves the point about the paucity of Black pilots. (Incidentally, Gooding “fought with Robert Markowitz, who directed ‘Tuskegee Airmen.’ He was a Jewish man telling a black story.” Gooding’s feeling was that “even though the movie turned out OK, I was like, ‘Yes, I get it. Racism. But what about the heroism?’” The same article also discusses non-Jew George Lucas’s personal $50 million funding of a film about these same pilots, Red Tails.)

What I show students is how common it is for a film to begin traditionally with White male pilots, but then they will somehow die or otherwise lose control, only to be replaced by a woman. This is true of the 1997 film Turbulence, in which Lauren Holly takes control of a jumbo jet after the pilots are killed. (Ray Liotta does a great job as a psycho killer.) 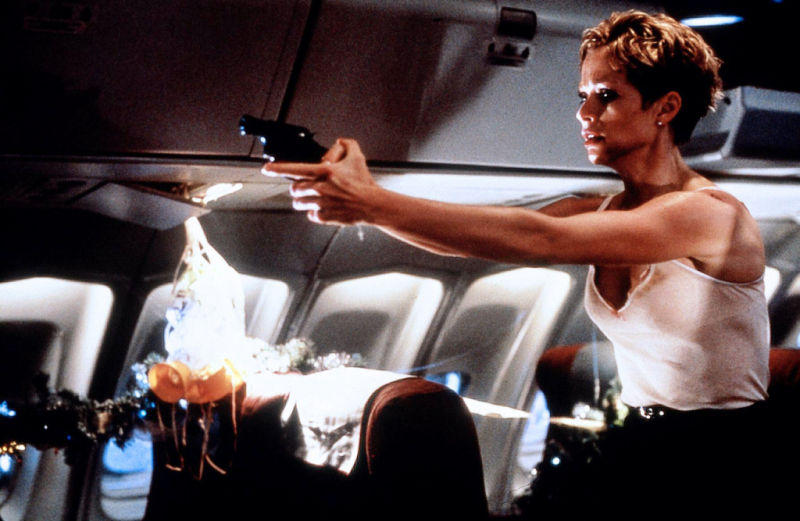 Until recently, though, Hollywood has been reluctant to feature a Black hero pilot of a commercial airline, though it is difficult to say why. Here and there we see Blacks as co-pilots or flight engineers, as in the 1997 blockbuster Air Force One, starring half-Jewish actor Harrison Ford as President (and reluctant pilot). There the flight engineer of Air Force One is Black.

(Incidentally, to its credit, Cineflix has accurately reproduced the attempted suicide hijacking of a FedEx DC-10 in which three White pilots were attacked inflight by fellow Black pilot Auburn Calloway. In his attack, Calloway used a spear gun and hammer, thinking the blunt-trauma injuries would mimic those incurred in a crash. See here for the reenactment. I don’t think this is what most filmmakers have in mind when they consider portraying a Black pilot, though.)

Now, however, Hollywood has taken the plunge and will feature none other than Denzel Washington as an ace pilot of a commercial airline. To date, Paramount has only released the trailer, which is well worth watching here. Washington stars in Flight as Captain William Whitaker, who is at the controls of what appears to be a twin-engine DC-9 or later variant MD-80. Something goes wrong, the plane crashes, but all survive. Next we see Whitaker in the hospital, where a visitor tells him, “Looked like you pulled some kind of move up there, man. Saved a lotta lives. The way you landed that plane was nothing short of a miracle.” 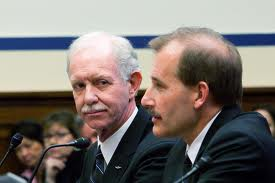 The “miracle,” of course, is nothing less than the “Miracle On The Hudson“ in which two White pilots safely landed a powerless Airbus A320 in the Hudson River. The pilot in command was 57-year-old “Sully” Sullenberger, a former fighter pilot, and Jeffrey B. Skiles was first officer. For Hollywood, though, this will not do.

Viewing the trailer of Flight, it does not appear that Whitaker will be a perfect Numinous Negro. True, his lawyer (Don Cheadle), tells him, “The FAA placed ten pilots in simulators, recreated the events. Every pilot killed everyone on board. You were the only one who could do it.” And even Whitaker claims, “No one coulda landed that plane like I did.” Yet the trailer tells us more: Whitaker may have been drunk. It seems that a court appearance and possible jail sentence loom ahead for Whitaker.

I hate to predict how the film will end. I suspect that screenwriter John Gatins and director Robert Zemeckis have found ways to absolve Whitaker. There may even be some implicit or explicit scenes featuring (alleged) White racism. Intriguingly, there is a very brief image in the trailer of a White woman in a bikini walking near Whitaker’s prone body. Does this suggest Washington’s character will risk a scene of interracial romance? To date, his characters have been very circumspect about dealing with this, at least when it comes to White women. And online teasers leave it vague. For instance, Empire Online reports that White actress Kelly Reilly plays Nicole Devlin, “a young woman battling drug addiction, who meets an airline pilot named Whip (Washington). He’s being hailed as a hero for saving 106 people by safely landing a damaged plane. But his actions are clouded by an investigation into whether he was drinking at the time. As the pair tries to confront their demons, they become friends.” Ambiguous, as I say.

When you view this trend as a whole, it becomes clear what is being done: Hollywood is scripting the dispossession of White men (and, in time, of course, White women). First come the images, which the masses internalize. Then when the actual dispossession procedes, far too few Whites are alarmed by it. After all, everything is going according to script as far as they are concerned.

Counter-Currents editor Greg Johnson, in an essay from his book Confessions of a Reluctant Hater gets it just right:

The people who create these movies — the directors, the writers, the producers, the casting directors — are not artists. They are abortionists. They are aborting the whole future of the white race. And they are not doing it by accident. We know this, because so many of them are Jews . . .  (p. 111)

So, readers, mark your calendars for the November debut of this latest Denzel Washington flick. If it follows the pattern of positive roles for Denzel Washington characters, my argument about the scripted replacement of real White men will be bolstered. At the same time, however, I’ll have to endure knowing that the campaign against the White race continues unabated. As I say, it’s a conflicted position to be in.

Special Note: I’d like to dedicate this article to James Edwards, Keith Alexander and the rest of the crew of the wonderful radio show The Political Cesspool. On June 30, 2012, James ran three reruns of old shows, putting your humble author in the company of such luminaries as Patrick Buchanan and Kevin MacDonald (click here). In my hour, we discussed some of the same Denzel Washington films as above, so please feel free to listen.