Since the election, secession is in the air. So far 20 states have filed petitions. This is mostly symbolic, but it merited an op-ed by one Paul VanDevelder in the LATimes “One nation — but maybe not so indivisible: You red states want to secede? Don’t let the door hit you on the way out.” (I guess that J. M. Berger is wrong that advocating secession “might finally get me fired” [Foreign Policy, “My Awakening], thereby making those wonderfully tolerant folks at the SPLC deliriously happy. After all, if  advocating secession is okay for a writer in the L. A. Times, it shouldn’t imperil my academic career.)

Mr. VanDevelder is quite on board with that.

We wish you the best of luck with this. We feel your pain. If we can speak frankly, it’s been coming for a long, long time. The question now is: What’s next?

First, we’re happy to report that most people here in Oregon, Washington and California think you’re really on to something. This marriage has run its course. Too many niggling little things built up over time, driving us all crazy. So let’s just stop. It’s time to divvy up the china and draft a property settlement. In the spirit of fairness and goodwill, we propose the following as a starting point.

What Mr. VanDevelder has in mind is the following map. 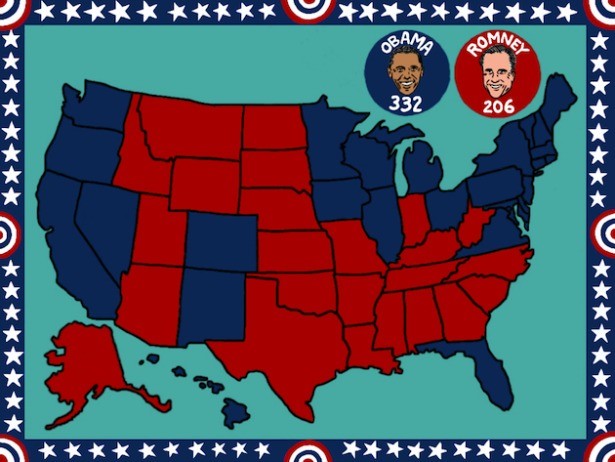 VanDevelder also thinks Austin, Texas should be a special blue protectorate. He’s probably right. I was there recently, and the reigning slogan seems to be “Keep Austin Weird”—visible on tee shirts and coffee mugs on sale everywhere. Very un-Red-State. 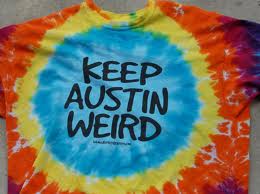 Austin is negotiable. But if we grant them that, how about all the red counties that are in blue states, as seen on the following map? VanDevelder is happy to be getting Yosemite, but it looks to me that it is in the heart of red California. 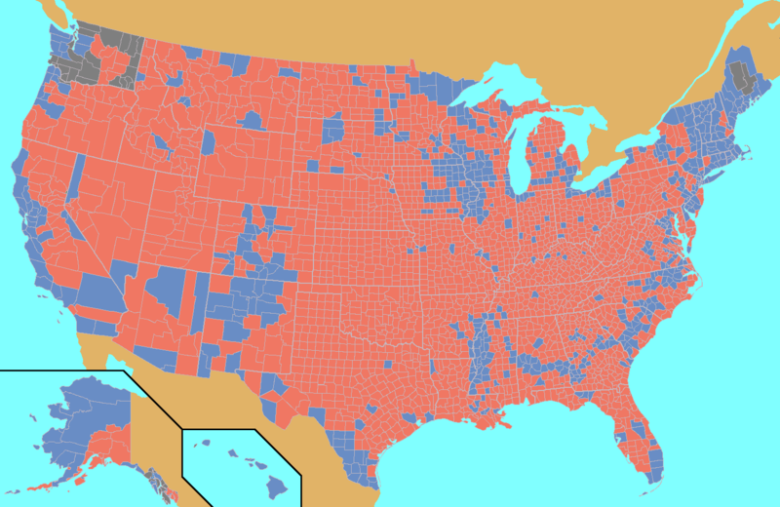 I couldn’t agree more that the divorce is overdue. VanDevelder is horrified by the culture of red state America, but hey, let’s take a look at the culture of blue state America. Just today the LATimes has an article on public nudism in San Francisco–the heart and soul of blue state culture. Urban nudism is now quite common in certain areas, and we find that “some [nudists] apparently accessorized the usual shoes and sun hats with jewelry that cannot be described fully in a family newspaper.” Hmmm,  I am not sure I want to find out what that means.

This gentleman is much classier: 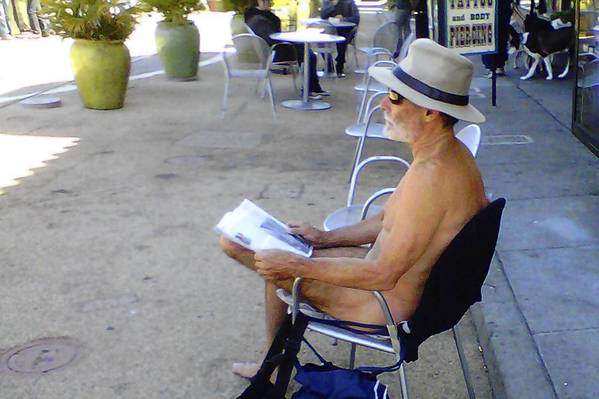 LATImes caption: George Davis, 65, exercises his right to be nude while reading at the corner of 17th and Castro streets in San Francisco. (Maria L. LaGanga, Los Angeles Times / November 18, 2012)

Yes, there is so much to love about the culture of blue state America. It’s true that there is an attempt to ban public nudity, but the leader of the proposed ban, Scott Wiener,  is hardly a candidate for life in red state America:

“It was fine to have a random [naked] person walking through the neighborhood once in a while. It was fine at public festivals and parades. …  What’s happening now is … a caricature.”

I doubt the ban will win. To ban such expressions would be very un-blue state. Naturally, the “naturists” are fighting back:

They held a nude-in on the steps of City Hall. Then they filed a federal lawsuit.

To Gypsy Taub, protest organizer and hostess of a local show called “My Naked Truth TV,” the proposed ban is proof that officials want to turn the city back into “the Dark Ages of body shame and fear.”

Besides, the proposed ban would have only limited effect:

The proposed ban would not stop the athletically inclined from jettisoning their shorts during the Bay to Breakers run — the historic, costume-optional race through this city’s microclimates (chilly to chillier). And Dykes on Bikes could wear — or not — whatever they wished during the Pride Parade.

So let’s move on with the divorce. Couldn’t possibly happen soon enough. Of course, Mr. VanDevelder may be in for  rude awakening when he finds that some of the ethnic parts of the Democrat coalition are not at all keen on gay issues.

There is a certain urgency now with the Republicans gearing up to support an amnesty that will speed up the blueification of the rest of America.

Republicans “are in a free-fall, and the only parachute they have is the immigration reform parachute, and they should pull that rip cord,” said Angela Kelley, an immigration policy expert at the Center for American Progress, a liberal think tank based in Washington, D.C. ” A lot are tugging at it,” she said. (see here)

Bad times when the Republicans are heeding the advice from the Center for American Progress (“Major individual donors include George Soros, Peter Lewis, Steve Bing, and Herbert M. Sandler”; see here) and the Republican Jewish Coalition.