Eugenics has always verged on common sense for evolutionists. Recently evolutionary psychologist Geoffrey Miller commented on China’s policy of taking eugenics seriously by “creating the world’s highest-quality human capital in terms of the Chinese population’s genes, health, and education.” As a result, the Chinese now have invested in cutting edge genetic research and are moving to create smarter babies. By understanding the genetics of IQ and allowing couples to select which of their fertilized eggs to rear, they will be able to raise the IQ of their offspring. As Miller notes in an interview, “Even if [this process] only boosts the average kid by five IQ points, that’s a huge difference in terms of economic productivity, the competitiveness of the country, how many patents they get, how their businesses are run, and how innovative their economy is.”

Count on the West to continue to import millions of low-IQ immigrants and to go into a moral panic at the very thought that genetic differences could influence IQ and that IQ is important for competitiveness.

However, that doesn’t mean that enterprising people in the West cannot use a basic grasp of eugenics to strike it rich. The LA Times reports that Ron Holmes used a basic knowledge of eugenics to enrich himself and his family (“NCAA to NBA millions: UCLA star’s father mapped out a dream; Ron Holmes has spent two decades guiding his son Shabazz Muhammad toward a pro basketball career. The payoff is near, with the UCLA star projected as a top draft pick“). 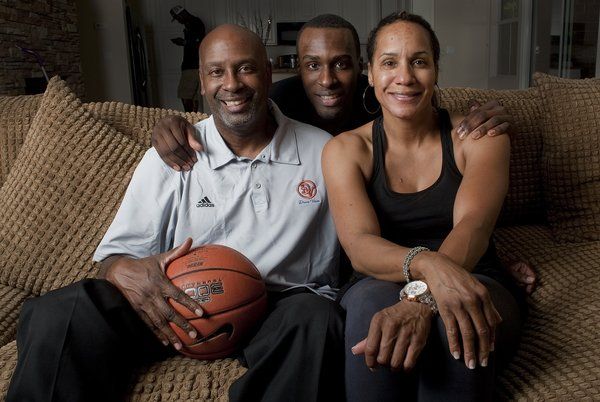 Shabazz Muhammad with his parents, Ron Holmes and Faye Muhammad.

Holmes plotted out his life 20 years ago:

In the early 1980s, Holmes was a 6-foot-5 standout guard for USC. He never made it to the pros. But he was already thinking far into the future.

As a student, Holmes said, he found himself fascinated by the careful breeding of thoroughbreds, the way that two fast, powerful horses could be crossed to create an even faster, more powerful colt.

Around that time he met Faye Paige, a point guard, sprinter and hurdler at Cal State Long Beach. Spotting her at a summer league game, Holmes recalled saying to a friend: “See that No. 10? She’s going to be my wife, and we’re going to make some All-Americans.”

Fortunately he didn’t pay any attention to his professors in the social sciences. As someone with well-above-average athletic talent, he was aware that by marrying a woman who also had athletic talent he would maximize his changes of having a child who was a “genius-level” athlete. He carried out his plan, augmenting his genetic selection of his wife by providing an ideal environment for creating a basketball star — what behavior geneticists label a passive genotype-environment interaction (i.e., a meshing of genes and environment to maximize genetic potential, as when parents with high genetic potential for intelligence read books to the child, talk to the child using relatively complex age-appropriate sentences, and make sure the child gets the best possible education).

Off the court, Holmes has been putting on a clinic on how to mint an NBA millionaire.

He made sure Muhammad worked out with some of the sport’s finest trainers. He enrolled his son in one of the nation’s best high school basketball programs. He helped create a team tailored to showcase his boy’s strengths in the high-profile summer circuit. And somewhere along the line, a year was shaved off his son’s stated age, giving Muhammad an edge over players in his age group. …

The father decided long ago that he would make the system work for him. For years, Holmes has tirelessly promoted the Shabazz Muhammad brand to scouts, journalists, money managers and others. Holmes navigated every difficulty, including a potentially devastating NCAA sanction that ultimately sidelined his son for only a few games. …

Driven by his father, Muhammad spent countless hours in the gym. Because his son suffered from a mild case of Tourette’s syndrome, which can cause tics and other problems, Holmes told him he had to work that much harder.

While other teenagers bagged groceries after school, Muhammad crisscrossed the nation, attending dozens of camps and tournaments where scouts would tweet about his progress, post videos and document his ascent in the newsletters they peddle to college coaches. …

With Muhammad now projected as a top-five pick in June’s NBA draft, Holmes’ investment is about to pay off.

So while the West engages in wishful thinking on eugenics, someone like Holmes is able to work the system by not listening to the messages being put out by the academic elites.

Another example, that didn’t turn out well, is Marv Marinovich, father of Todd Marinovich, the NFL quarterback whose career was cut short by drug addiction. “Todd’s mother, Trudi, came from an accomplished athletic family. Marinovich won’t say that the potential for athlete-producing genes is the first quality he has sought in a prospective mother. But it is ‘one factor.’ He also paid close attention to Todd’s environment: “Marv …  knew which vitamin supplements he and his wife should take to conceive a perfectly healthy child. It was Marv who applied Eastern Bloc training techniques, insisting that Todd discipline his mind and body and forgo Big Macs, sugar and hanging out at the beach.” Again, an awareness of how genes and environments mesh to maximize potential.

I suppose it’s possible that Holmes’ dream could be short-circuited in the same way: Selecting for athletic talent doesn’t necessarily select for good executive control, and fathers can’t control the environments their children choose once they become adults.

But if Holmes’ project works out, I suspect that Shabazz will be very generous with his father when the money starts rolling in later this year. Given all the time and energy he put into this project, he certainly deserves it.