Alan Rusbridger is the editor of The Guardian, Britain’s biggest liberal newspaper. Like many liberals, he’s a good example of the vast difference between intelligence and wisdom. Here is he talking about Edward Snowden and the National Security Agency:

Rusbridger said the NSA stories were “clearly” not a story about totalitarianism, but that an infrastructure had been created that could be dangerous if it fell into the wrong hands.

“Obama is a nice guy. David Cameron is a nice social Democrat. About three hours from London in Greece there are some very nasty political parties. What there is is the infrastructure for total surveillance. In history, all the precedents are unhappy,” said Rusbridger, speaking at the Advertising Week conference. (NSA surveillance goes beyond Orwell’s imagination, The Guardian, 23rd September, 2013)

Why is Obama a “nice guy”? Well, he’s got dark skin and he talks a lot about justice and equality. So it doesn’t matter that he’s actually a malign affirmative-action narcissist who hates White America and is working hard to destroy it in collaboration with the Republicans and the mainstream media. After Obama, Rusbridger mentions David Cameron, leader of the Conservative party. And yes, he does correctly recognize that Cameron is a “social Democrat” rather than a conservative. But he goes astray again talking about Greece and the “precedents” of history.

The “nasty political party” in Greece is Golden Dawn, which wants to run Greece for native Greeks rather than for foreign bankers and Third World immigrants. Golden Dawn use a swastika-like flag and are admirers of Adolf Hitler. Rusbridger thinks that this makes them eager to conduct “total surveillance” of the Greek people. He’s wrong. If he actually knew history rather than liberal dogma, he’d know that Nazi Germany was far less of a police state than communist East Germany. And you don’t have to take my word for that:

“The Stasi was much, much worse than the Gestapo, if you consider only the oppression of its own people,” according to Simon Wiesenthal of Vienna, Austria, who has been hunting Nazi criminals for half a century. “The Gestapo had 40,000 officials watching a country of 80 million, while the Stasi employed 102,000 to control only 17 million.” One might add that the Nazi terror lasted only twelve years, whereas the Stasi had four decades in which to perfect its machinery of oppression, espionage, and international terrorism and subversion. (Stasi: The Untold Story of the East German Secret Police, John O. Koehler, Westview Press, 1999)

When governments rule for the benefit of the majority, they don’t fear the majority and don’t need to keep it under close surveillance. Nazism and fascism are not my political ideals, but they were genuinely popular movements. Marxism has never been popular and does need to run a surveillance state. After communism swallowed Eastern Europe at the end of the Second World War, it kept everyone under close watch, but there were still major rebellions in Poland, Hungary and Czechoslovakia. Modern Hungary has a “nasty political party” called Jobbik, whose motto is Magyarország a Magyaroké – “Hungary for the Hungarians.” They  are regularly described as racist, xenophobic and anti-Semitic.

This may be because Jobbik remember what happened in the short-lived, Jewish-dominated communist regime headed by Béla Kun (i.e., Cohen) in 1919. Kun oversaw a fanatical assault on the lives, property, culture and religion of Christian Hungarians. Jews were also hugely over-represented in Russian communism, the post-WWII Hungarian government (“completely dominated” by Jews [see here, p. 89]), and in communist parties in the West. These facts inspired an English writer to say something shocking during the Second World War: “What I do feel is that any Jew, i.e. European Jews, would prefer Hitler’s kind of social system to ours, if it were not that he happens to persecute them.”

Who was that viciously bigoted writer? It was the secular saint George Orwell (see here). Orwell also drew up a list of possible communist sympathizers or agents he thought should be excluded from work for the British Foreign Office. He explicitly noted that some suspects on the list were Jewish. His words are automatically condemned nowadays, of course, because he was guilty of something that has been made heretical: making accurate observations of an important racial pattern. Jews are indeed drawn to authoritarian social systems like communism, just so long as they are in charge. Orwell had a much deeper understanding of the world than his modern liberal admirers:

The potential of the surveillance state goes way beyond anything in George Orwell’s 1984, Alan Rusbridger, the Guardian’s editor-in-chief, told an audience in New York on Monday. Speaking in the wake of a series of revelations in the Guardian about the extent of the National Security Agency’s surveillance operations, Rusbridger said: “Orwell could never have imagined anything as complete as this, this concept of scooping up everything all the time.” (NSA surveillance goes beyond Orwell’s imagination)

Rusbridger is as ignorant of Orwell as he is of history. Orwell certainly imagined all that. This is what Winston Smith realizes after his arrest in Nineteen Eighty-Four (1948):

He knew now that for seven years the Thought Police had watched him like a beetle under a magnifying glass. There was no physical act, no word spoken aloud, that they had not noticed, no train of thought that they had not been able to infer. Even the speck of whitish dust on the cover of his diary they had carefully replaced. They had played sound-tracks to him, shown him photographs. Some of them were photographs of Julia and himself. Yes, even… He could not fight against the Party any longer. (Nineteen Eighty-Four, Part Three, ch. 4)

Orwell understood Marxism and what minorities do when they get their hands on power. Minority regimes are paranoid and want to keep everyone under surveillance. The minority Alawi regime in Syria spied on and persecuted the Sunni majority, who are presently rebelling as the non-communist majority did in Poland, Hungary and Czechoslovakia. By contrast, Hitler’s Germany, Mussolini’s Italy and Franco’s Spain were not surveillance states. But communist East Germany was definitely a surveillance state:

Full-time officers were posted to all major industrial plants (the extensiveness of any surveillance largely depended on how valuable a product was to the economy) and one tenant in every apartment building was designated as a watchdog reporting to an area representative of the Volkspolizei (Vopo). Spies reported every relative or friend who stayed the night at another’s apartment. Tiny holes were drilled in apartment and hotel room walls through which Stasi agents filmed citizens with special video cameras. Schools, universities, and hospitals were extensively infiltrated. (Stasi entry at Wikipedia).

Marxists behave like that because Marxism is run by and for minorities. The most important of those minorities are the Jews. Their view of history is simple: for millennia, blameless Jews have been persecuted, massacred and expelled by Christian and pagan Whites who are driven by nothing but irrational prejudice and malice. That is why Jews want to keep the gentile majority under close surveillance and why Sir Malcolm Rifkind, Jewish Chairman of the Intelligence and Security Committee since 2010, tells lies like this: 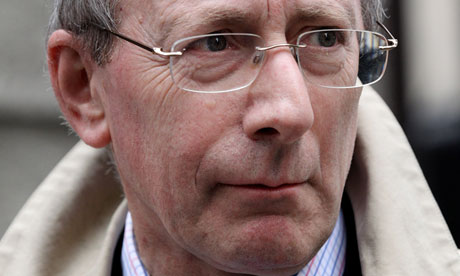 On Tempora, it has been well known that the fibre optic cables that carry a significant proportion of the world’s communications pass close to the British coastline and could provide intelligence opportunities. The reality is that the British public are well aware that its intelligence agencies have neither the time nor the remotest interest in the emails or telephone conversations of well over 99% of the population who are neither potential terrorists nor serious criminals. Modern computer technologies do permit the separation of those that are of interest from the vast majority that are not. (What rubbish, Sir Simon! Our intelligence agencies are not outside the law, The Guardian, 20th September, 2013)

“Trust us!” cries a member of the world’s most paranoid, self-pitying minority. I’d as soon trust a hungry crocodile in a kindergarten.