It must be self-evident to all those who consider themselves in some way politically right-wing that the left has achieved cultural hegemony throughout the Occidental world. Virtually every film, every television series, every soap opera, every song, every theatre or radio play, every novel, short story, poem, comic, graphic novel and cartoon is used to carry and push Marxist and neo-Marxist ideology to ever further extremes. How many songs have you heard that urge our youth to reject their parents? How many films have you seen where miscegenation is normalised and those against it demonised? How many soap operas promote ‘alternative sexualities’ and promiscuity?

Think of all the films and TV series that urge us to dissolve national borders and build to a one-world government. In the series Star Trek and its series of films and spin-offs, we have not only a world government, but an intergalactic federation too. Gene Roddenberry himself said that he was creating ‘morality plays’. Think of the recent trend in disaster films such as 2012, The Day After Tomorrow and Armageddon, where disaster is on a global scale. Global disasters call for global solutions and such trifling things as national borders are seen as ridiculous in view of such cataclysmic events. 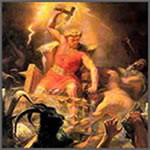 Indeed, cultural Marxism is now all-pervasive. Most people believe cultural Marxism is synonymous with political correctness. But it is more than that. Cultural Marxism, after the ‘work’ of Antonio Gramsci, is about getting Marxist and neo-Marxist ideas ingrained in the public consciousness and even subconsciousness via subversion of the national culture. One way is to imprint Marxist ideology on cultural texts for public reception. Thus, the more texts are received and absorbed by the public, the more sympathetic to Marxist ideas they become.

Certainly, this is the core assumption behind the Reader Response and Reception Theories of the Konstanzer Schule, where a neo-Marxist system of value is placed upon a text, a text being deemed more culturally valuable the further it normalises a pseudo-morality that posits itself against traditionalist reader expectations.

Mjolnir is a major step in the cultural fightback against this tidal wave of propaganda. Our enemies have vast financial resources at their disposal and can therefore invest in all the arts – especially that latterly invented form of Gesamtkunstwerk so conducive to indoctrinating the masses: film. We have no such means at our disposal, yet classical art forms are not beyond our means: graphic art, plastic art and literature. Mjolnir is a print magazine set up to collate and showcase the illiberal Eurocentric arts.

Our broad ideology of traditionalism within an ethnically European framework once boasted some of the greatest cultural luminaries of the twentieth century: G K Chesterton, T S Eliot, Evelyn Waugh, Wyndham Lewis, Ezra Pound, Louis-Ferdinand Céline, Josef Weinheber, Filippo Tommaso Marinetti, Arno Breker, C S Lewis and J R R Tolkien, to name but a few. Politically, they represented many different positions along the thread of what can broadly be termed ‘the right’; aesthetically and stylistically, they were equally as varied, with some embracing modernism and others working within given European artistic and cultural conventions; but what unites this disparate group of cultural icons is that they were all quintessentially ethnically European in the racial-spiritual tradition.

Two major events destroyed this philosophical continuum that expressed itself in art: the Second World War and the 1960s Cultural Revolution, the former being responsible for the latter. The demonization and defeat of regimes that were deemed politically right wing (ignoring these regimes’ socialist programmes) led directly to the left’s demonization with impunity of all right-wing politics. Right-leaning writers were increasingly dropped by publishers if they did not alter their position. Today, no truly right-wing creative writer is published by mainstream publishers. Our movement had been made virtually bereft of art.

Mjolnir aims to change all that. The aim of Mjolnir is to collate and showcase the best of the right’s art. It is a given that contributions will have to be Eurocentric in some form or other and carry our ideology, but the works themselves will and must be judged primarily as works of art no matter how much they are aligned with our politics: if it’s not good enough, it doesn’t go in! Contributors should also write a bit about what they tried to achieve in their work: it gets the readership thinking about art and how it works and influences people. That way, others can develop their own techniques.

The kind of art included will be:-

There will also be additional pieces from the past canon of European art and literature that are philosophically Eurocentric. Academic articles on the arts from a Eurocentric standpoint will also be accepted. These must be properly referenced (using the MLA system) with an appropriate bibliography. However, I will try to give over at least two thirds of the magazine to original creative work.

I would also advise potential contributors to avoid writing maudlin and depressive poetry. All too often the creative element of our movement seem to fall into despair about how the world is. The condition of the Occident is evident, and the readership do not need reminding of its degeneration needlessly. Therefore, work of this type will have to be of an exceptional standard to be included. Emphasis will be on poetry that is in some way uplifting, amusing, heroic or wondrous.

In terms of theological leanings, all traditionally European belief systems may be used to underpin narrative, i.e. the various forms of European Paganism and Christianity, although writers may be atheistic or agnostic. I will not, however, tolerate attacks on these belief systems to aggrandise another, i.e. Paganism versus Christianity or atheism versus religion. Neither will the Slavs versus Nordics antagonism that sometimes rears its ugly head on nationalist fora be tolerated. The aim of this magazine is to unite Whites, not divide them.

As time goes on, it will become more and more apparent what is required. It is my hope that a core of elite artists will be formed over time, who will, in turn, form the backbone of a cultural movement. They will attract other artists and audiences and thus begin to alter the public consciousness. So, get writing, painting, sculpting and so on. There has already been a good response from published writers and artists, as well as ones starting out. All serious submissions will receive an appraisal if they do not make it into the magazine.