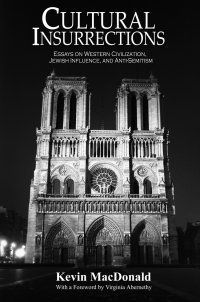 Jewish intellectual and political movements are a powerful force in Western societies. Marxism, Zionism, neoconservatism, psychoanalysis, and multiculturalism have transformed Western self-consciousness, shattered ancient political orders through wars and revolutions, and promoted the ongoing demographic dispossession of European peoples by Third World immigrants. The Jewish role in these movements is often the subject of fierce partisanship, on all sides, but is seldom the subject of careful and dispassionate scientific analysis. …

In the present volume, MacDonald extends and refines his analyses in chapters on Zionism and the Jewish role in Soviet Communism, neoconservatism, and the promotion of racial integration. MacDonald also devotes chapters to the anti-Semitism of Henry Ford, the psychological basis of ethnocentrism, the unique characteristics of Western civilization, and what Jewish group evolutionary strategies can contribute to its survival. …

Anti-Semitism
7. Henry Ford and the Jewish Question
8. Enemies of My Enemy