The German newspaper Der Tagesspiegel (Daily Mirror) launched an online survey on March 6th, asking its readers in faulty German of how the West should react with regard to Russia’s incursions into Ukraine. What follows were the different answers from which the readers could choose. 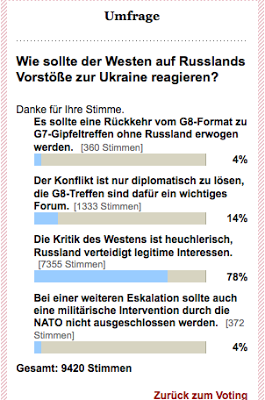 By four o’clock in the afternoon, 9420 readers had answered the survey, and what they had to say filled the presstitutes from the Tagesspiegel with sheer horror.  Because only a puny four percent, and we know who those are, favoured a military intervention by NATO forces. Whereas a staggering seventy eight percent believed that Western  hacks like Kerry or Merkel were mere hypocrites and that Russia defended indeed legitimate interests.

So what happened? At four o’clock and five minutes, the survey was abruptly taken off the net  and never seen again. Which clearly indicates that the propaganda lies of our hostile elite and their once invincible  media outlets are losing ground. And which, as you will agree, is a ray of hope in the murky Western skies, particularly since the once so totally indoctrinated and docile Germans are seemingly waking up.

Freeman of All Noise and Smoke , posted Saturday, 8 March 2014