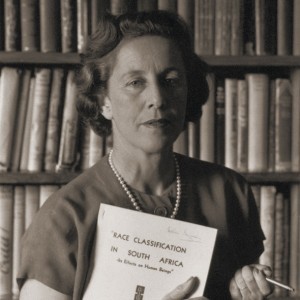 The forgotten saint of the anti-apartheid movement, her legacy to liberalism was to abandon the armchair. … For an astonishing 36 years Suzman was a flickering flame of white conscience in apartheid South Africa. For 13 of those years she carried that light alone, a one-woman party in a parliamentary sanctum of hostile men. While some came to admire her, most loathed her, and tried to drive her from their presence. They jeered her interventions with sexist, antisemitic, domineering abuse. The anti-apartheid activist Helen Joseph wrote that “even house arrest” must have been less lonely. Suzman’s resistance must be among the most courageous parliamentary careers ever.

Covering South Africa at the time, I was fascinated by what made Suzman tick. From comfortable Jewish stock, married to a doctor and with no need to worry herself with politics, in 1953 she became MP [Member of Parliament] for Johannesburg’s “silk stocking” Houghton district. She could have settled into the English-speaking United party, in fake opposition to the apartheid nationalists. Later, even as a solitary Progressive, she could have “done a Sinn Féin”, and boycotted the system as a gesture. …

The most lethal weapons in the political tool kit are anger and humour. Suzman deployed both. She was perpetually furious. On my visits she would thrust at me some document of appalling injustice and ask how I could just stand there without getting down to write. When a minister complained that her questions were embarrassing South Africa abroad, she said it was his answers not her questions that were embarrassing. When another said she should be more careful in her friends, she shouted: “No, only in my enemies.” …

Her gallows humour was anything but ladylike. After a day of hearing Afrikaners tell anti-black jokes, I was shocked to hear her telling dreadful anti-Afrikaner ones. … Suzman never compromised and would have been dreadful in office. To the end she prayed, “Let no one say I mellowed.” I followed her on the 1994 election day, when she was inspecting polling stations in Soweto. I thought it would be an elegiac victory tour through the dusty streets of a lifetime’s struggle. No way. Suzman was in a perpetual rage at the queues and official incompetence. “Don’t worry, Mrs Suzman,” people said. “We have waited 46 years. We can wait four hours. We are happy.” She replied: “Nonsense. Find me the returning officer.” (Helen Suzman deserves her tribute alongside Nelson Mandela, The Guardian, 6th March 2014)

Anger… perpetually furious… never compromised… perpetual rage… But I think something’s missing: the word “hate.” I doubt that Helen Suzman was motivated by love of Blacks, but those “dreadful anti-Afrikaner jokes” probably reflected her true feelings about White Christian South Africans. Would she have campaigned as intensely against Israeli injustices against Palestinians? I think not.

In the end, she got what she wanted: White South Africa was overthrown and Suzman’s dear friend Nelson Mandela became president. That other formerly former White-minority governed country, Zimbabwe (see also here), is a political and economic disaster on an even bigger scale, and sooner or later South Africa will surpass it.

Fun in the Sun

Self-righteous liberals like Helen Suzman were responsible for putting Mandela into power, so Black South Africa has been careful to adorn itself in symbols pleasing to liberals. For example, it has legalized gay marriage and criminalized homophobia. The pious symbols are all in place. Has the noble substance followed? Here is the answer:

Corrective rape is a hate crime wielded to convert lesbians to heterosexuality – an attempt to ‘cure’ them of being gay. The term was coined in South Africa in the early 2000s when charity workers first noticed an influx of such attacks. But despite recognition and international coverage, corrective rape in the region is escalating in severity, according to Clare Carter, the photographer behind these images. This is amid a backdrop of parts of the country “becoming more homophobic”, as one recent victim asserts. …

In 2007, to cite one incident, Sizakele Sigasa, a women’s and gay rights activist, and her friend Salone Massooa, were outside a bar when a group of men started heckling and calling them tomboys. The women were gang raped, tortured, tied up with their underwear and shot in the head. Executed. No one was ever convicted. …

Ever since a 1998-2000 report by the United Nations Office on Crime and Drugs ranked South Africa as highest for rapes per capita, it has repeatedly been described as the rape capital of the world: 500,000 rapes a year; one every 17 seconds; one in every two women will be raped in her lifetime. Twenty per cent of men say the victim “asked for it”, according to a survey by the anti-violence NGO [non-governmental organization], CIET [Community Information and Epidemiological Technology]. A quarter of men in the Eastern Cape Provinces, when asked anonymously by the Medical Research Council, admitted to raping at least once – three quarters of whom said their victim was under 20, a tenth said under 10. A quarter of schoolboys in Soweto described “jackrolling” – the local term for gang rape – as “fun”. …

Of all the countries in the continent, South Africa should be the least likely to be tarnished by homophobic hate crimes. Its 1997 constitution was the first in the world to secure the equal rights of LGBT people and a flurry of laws followed preventing workplace discrimination and, in 2005, allowing gay marriage. …

Before leaving South Africa, Carter went to a taxi rank near Pietermaritzburg where she was told there were men who admit to corrective rape. She filmed them.

“If we want to finish lesbians and gays they must be forcefully raped,” says one, grinning at the camera. “A man must go back to his manhood. Women must be women. She must be ready and willing to have sex.”

“They must be raped so that their gay and lesbian behaviour can come out,” adds another.

The third raises his voice, points two fingers at his temple and concludes: “This gay and lesbian thing must end. I say bang bang bang!” (Crisis in South Africa: The shocking practice of ‘corrective rape’ – aimed at ‘curing’ lesbians, The Independent, 4th January 2014)

Thapelo Makhutle’s body was found by his best friend in his tiny room in the small Kalahari town of Kuruman in the Northern Cape on Saturday morning, June 9. He had been beheaded, his genitals hacked off, his tongue cut out and his testicles stuffed into his mouth. Makhutle’s best friend, Mosiami Boyang, said the night before Makhutle was brutally murdered was just a normal Friday night out with friends in Seoding village outside Kuruman. …

A man approached Makhutle asking about his sexuality – everyone in Seoding knew he was gay. An argument ensued but was quickly ended. After that, Makhutle left the tavern without saying goodbye. “Later, I wanted to go to Thapelo’s room to see him, but I knew he had to work the next day so I decided not to bother him,” Boyang said. “I walked right past his room. I wonder what would have happened if I had gone inside then?”

The next morning Boyang went to Makhutle’s room. It was a complete mess. Only when he peered around the damaged door and lifted the blankets at his feet did he see his friend’s bloody, mangled body. … (Gentle man’s brutal murder turns spotlight on intolerance, South African Mail & Guardian, 28th June 2012)

That is what Helen Suzman’s verbal aggression and self-righteousness helped to create in South Africa. You don’t have to look far in America and Europe to find similarly aggressive and self-righteous liberals demanding that all White nations abolish themselves as South Africa did. The results will be the same: civilization will be replaced by barbarism.