OMG! Something appalling and unacceptable has slipped through the Filters of Decency and Reason at the Guardian. Earlier this year, feminist warrior Laura Bates penned another white-hot assault on everyday sexism for the Woman’s Blog there. So far, so Guardianista. But look at the photo the website chose to illustrate her item. It’s a scene of everyday sexism in which the woman is White and the two sexist men leering at her from motorbikes are – I can hardly bring myself to say it – the two sexist men are Brown: 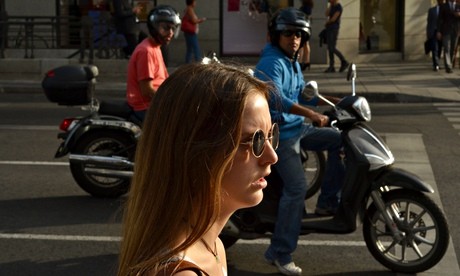 Isn’t that appalling? The filters have failed. Reality has slipped through and the Guardian has done something abhorrent: it has admitted the truth about non-Whites. Mass immigration from the Third World is extremely bad for Western women. Men of all races are capable of behaving badly towards women, but the worst behaviour of all comes from non-Whites and particularly from Blacks and Muslims.

It’s fortunate, then, that Laura Bates herself managed to keep the reality-filter firmly in place in the blog item itself. She’s complaining about an unpleasant sexual remark. But the only thing she reveals about “the men” involved is their number and the language they used:

Walking down a quiet street at around 7pm a few nights ago I noticed, without thinking anything of it, that there were two men coming towards me in the opposite direction. It being dark but for the street lamps, it wasn’t until they came quite a lot closer that I started to notice the tell-tale signs. As they neared, the men were overtly looking me up and down, eyes lingering on my breasts and legs, before turning back to one another, saying something I couldn’t hear, and sniggering. My heartbeat quickened, the hair rose on my arms, and I felt the usual emotions flood through me. Fear. Anxiety. Impotence. Anger. Frustration. Misplaced embarrassment and shame. …

Too late to cross the street, I braced myself for the moment of passing, muscles tensed, cold fists involuntarily clenched. I understand that this must sound like an overreaction. But it isn’t. Because the way we think and behave is shaped by our previous experiences. Too many times, in my own experience, this situation has turned from leering to aggressive sexual advances, from polite rebuttal to angry shouts of ‘slag’, ‘slut’, ‘whore’. Once, I was chased down the street. Once, I was trapped against a wall. Once, my crotch was grabbed suddenly, shockingly, in vitriolic entitlement. So yes, my muscles contracted and I drew into myself as they passed.

For a moment, they paused, and one glanced at my breasts before turning nonchalantly to the other. I was expecting the usual. “Look at the tits on that”, or “I wouldn’t say no”. But what he actually said took my breath away:

The other man laughed, and they walked away without giving me a second glance. (Women should not accept street harassment as ‘just a compliment’, The Guardian, 28th February 2014)

What did the “men” look like? I’d suggest that they were members of a vibrant community, with black or brown skins, just like the ones who grabbed her crotch. Gangsta culture celebrates that kind of behaviour and thanks to mass immigration and lavish subsidies for breeding, Britain now has a lot of gangstas:

Britain’s worst gang-hit neighbourhoods are seeing levels of sexual violence as bad as in war zones, it was claimed today. The warning came following the publication of a report for the Office of the Children’s Commissioner that found girls as young as 11 are being systematically groomed, exploited and raped.

Lead researcher Professor Jenny Pearce, of the University of Bedfordshire, said: ‘In some areas the level of sexual violence and the types of violence inflicted are comparable to how sexual violence is used in war-torn territories.’ She added that the ‘sheer levels of sadism’ uncovered by the inquiry had been shocking.

In a foreword to the report – the result of a two-year inquiry – deputy children’s commissioner Sue Berelowitz said: ‘The fact that some adults (usually men) rape and abuse children is generally accepted. There is, however, a long way to go before the appalling reality of sexual violence and exploitation committed by children and young people is believed.’

She adds: ‘We have found shocking and profoundly distressing evidence of sexual assault, including rape, being carried out by young people against other children and young people.

‘While we have published chilling evidence of this violence in gang-associated contexts, we know too that it is more widespread than that. This is a deep malaise within society from which we must not shirk.’ (Sexual violence in gang neighbourhoods is ‘like that in war zones’, The Daily Mail, 26th November 2013) 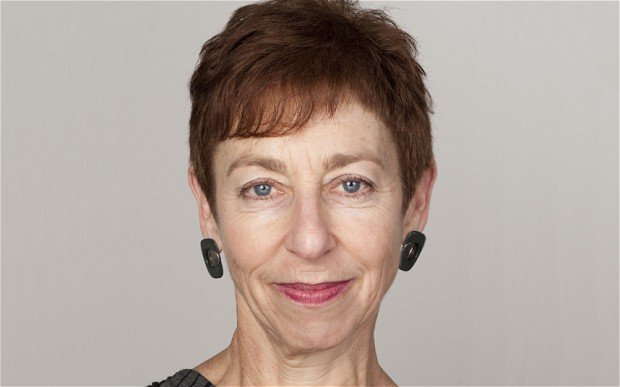 Sue Berelowitz is right about the “deep malaise” within Western society. She is part of it, because she lies about the central role of non-Whites in sex crime. The word “Black” is not mentioned in the article above. But the “worst gang-hit neighbourhoods” are, of course, the neighbourhoods most enriched by mass immigration. Third World people have created Third World pathologies in a First World nation.

Who could have foreseen that? Certainly not feminists like Laura Bates and Sue Berelowitz. They’ve been fully in favour of the mass immigration that has produced “war-zones” of sexual violence and harassment in British cities. And they continue to lie about the disaster they’ve helped to create. If they were really concerned about reducing sexual violence, here are two very simple policies they could support for all Western nations:

1) A ban on further immigration from the Third World.

2) Financial incentives for poor women to get sterilized or use contraception.

Those are perfect feminist policies. The first would mean that more rapists and murderers don’t enter the West and harm women here. The second would mean that poor and often non-White women have more money and more control of their own lives. It would also mean that fewer future rapists are added to the population. Indeed, fewer criminals of all kinds.

But those female-friendly policies would be rejected with horror by all liberals. They’re based on reality, which means that they’re vile, repulsive and racist. For liberals, it’s far better to let women be raped and harassed than to admit the truth and base one’s ideas on reality. The liberal motto is: “Give us vibrancy or give us death!” But vibrancy does mean death for liberalism. It also means rape-zones and constant sexual harassment. The Guardian admits that only by accident. See above.