With a year to go before the next British general election, the strategic brains behind an increasingly confident looking Labour Party are trying to tackle a matter of some delicacy — how are the British going to react to a Jewish Prime Minister? It is a tricky one because there is no disguising the fact that Ed Miliband is not only as Jewish as they come, but he has as much in common with the average Brit as a man from Mars.

The son of famous Marxist academic Ralph Miliband, he was born into a privileged and intellectual Hampstead milieu and has moved effortlessly via Oxford University and the London School of Economics to becoming a bag-carrier for senior politicians and then parachuted into the safe Labour seat of Doncaster north. A fairly normal trajectory then for a member of the increasingly hereditary political class and one that would have no doubt baffled the founders of  Labour Party in the coal pits of South Wales, the cotton mills of Lancashire and the shipyards of Clydeside.

Ed’s father Ralph was of Polish Jewish stock originally and arrived in Britain after fleeing Belgium in 1940 when the Germans invaded the Low Countries. Ralph worked as a lecturer at the LSE and became something of a fashionable academic fixture in the sixties New Left.

After Ralph’s son Ed became Labour leader, it was obviously decided that the matter of Jewishness had to be tackled head on, so once enough extended family Holocaust victims were discovered to make a suitable back story, Ed headed to Israel to meet his 84-year-old aunt, bond with Prime Minister Netanyahu and visit the Holocaust museum. 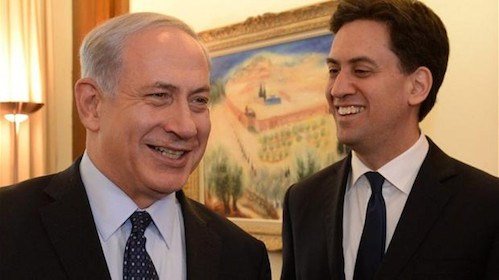 It was a private trip — just he and his wife, a bevy of photographers, television camera crews and a phalanx of press minders. Miliband’s gamble in highlighting his Jewishness seems to have paid off. Britain’s fearlessly independent press have been tripping over each other to say how much the Jewish thing doesn’t matter and how it has no significance.

In any case Ed has already gone out of his way to describe himself as an atheist.

My parents defined themselves not by their Jewishness but by their politics. They assimilated into British life outside the Jewish community. There was no bar mitzvah, no Jewish youth group; sometimes I feel I missed out.

Secular it may have been, but it’s well known that leftist Jews did not abandon their ethnic roots when they adopted Marxism as their religion. One person in a position to know remembers an overwhelmingly Jewish environment in Ed’s childhood home. American neoconservative David Horowitz was a leftist academic himself in sixties London. He befriended Ralph Miliband and was taken into the Miliband home.

He describes a fashionable left-wing salon overflowing with Jewish intellectuals and activists from every corner of the globe. There was Isaac Deutscher and his wife Tamara, Eric Hobsbawm, Eric Gellner and Marcel Liebman. In addition there would have been Leo Panitch, Ruth First and the ANC terrorist godfather Joe Slovo and any number of others.

Unlike many on the far-left, Miliband did not formally become a communist. Instead in the fifties he joined the Labour Party and became active in the Victory for Socialism committee where he became close friends with two Jewish Members of Parliament, Ian Mikardo and Stephen Swingler.  It has since been established that at the time both Mikardo and Swingler were being investigated by MI5 as “security risks” because of their links with the Soviet Union.

But there were plenty non-Jewish visitors as well, such as wealthy Trotskyite revolutionary Tariq Ali and Old Etonian Marxist Perry Anderson. Another of Ralph Miliband’s close friends was Isaac Deutscher, a writer of famous biographies of Stalin and Trotsky, and a very high-profile figure in left-wing London circles after the war. Deutscher had the dubious distinction of appearing on a list drawn up by George Orwell of prominent intellectuals suspected of having communist sympathies. Orwell told the Foreign Office they could not be trusted. In a review for the New Criterion, David Pryce-Jones described Deutscher:

intolerant and self-satisfied, a totalitarian of Trotskyite background, Deutscher exploited his continental and rather conspiratorial background to persuade people that he really knew about the Soviet Union.

Famous Marxist scholar Eric Hobsbawm was just as morally compromised. As the Daily Mail reported in 2012 Hobsbawm once made one of the most sickening admissions in British public life.

The historian was asked how he felt about his earlier support for the Soviet Union. If Communism had achieved its aims, but at the cost of, say, 15 to 20 million people — as opposed to the 100 million it actually killed in Russia and China — would Hobsbawm have supported it? His answer was ‘yes’.” (“He hated Britain and excused Stalin’s genocide. But was hero of the BBC and the Guardian, Eric Hobsbawm a TRAITOR too?“)

This then is the milieu that the current British Labour leader and possible future prime minister grew up in – relativism, betrayal and complete indifference to the slaughter of millions.

But perhaps there is someone else.  When Ed Miliband thinks back to his early childhood when the house would be full of clever people, does the name “Lev” ring a bell? — a gregarious, entertaining Russian journalist, fond of giving presents? He was almost definitely a KGB officer charged with recruiting assets from the left-leaning British intelligentsia. Many young leftists who entered Ralph Miliband’s circle ended up being “groomed” by Lev; David Horowitz was one of them (as discussed in a previous TOO article).

Thankfully Miliband and the Labour Party can be assured that no-one in Fleet Street will be touching this story before the election. The Daily Mail is still recovering from a full-on assault from the entire media establishment from the BBC to the Guardian, when they made the unremarkable observation that Miliband Senior was unpatriotic and hated Britain.

Ed Miliband has said he is still a socialist so part of him still cleaves to the old faith. But there is one Jewish trait that no-one can accuse Ed Miliband of — sibling favouritism. For it was his elder brother David who had been tapped for the leadership of the Labour Party, only to be roughly  elbowed out of the way by the youngster at the final hurdle in a jaw-dropping act of filial disloyalty. It proved that, whatever other qualities Miliband lacks; ruthlessness is not one of them.