An investigation is not Islamophobia

Lutfur Rahman is Britain’s first directly elected [West] Asian mayor. On 22 May [2014], he seeks re-election. He says he aspires to the highest standards of transparency and probity and that he welcomes scrutiny.

Two weeks ago, on [the BBC programme] Panorama, we scrutinised the way he’s run this most diverse of boroughs [Tower Hamlets]. Instead of welcoming this, the mayor employed a major City law firm and a PR company at huge public expense to try to get the programme stopped.

Tower Hamlets is home to the largest Bangladeshi population in Britain. The mayor says he seeks only to promote harmony; his Gandhi-like watchword is “No Place for Hate”. Yet before even a frame had been transmitted, a fusillade of hate-filled tweets screamed from his closest supporters: the [television] licence fee had been “used to preach hate”, to “demonise Muslims” and to “peddle racism and Islamophobia”.

The mayor launched an inflammatory 26-minute counter-documentary, weeks in the making. Fat was poured on this fire by a young Bengali researcher, who made increasingly fantastical claims that we were “Islamophobic bullies” and handed confidential research material from our production, including source notes, to the mayor’s office. Because of concerns about her reliability, we had asked her to leave the team after five days. …

In the run-up to the election, there have been widespread and persistent allegations by opposition councillors that Mr Rahman skewed the award of nearly £9m of grants in favour of Bengali- and Somali-run organisations to help him get out the vote on 22 May. The mayor categorically denies this, insisting that he awarded the grants solely on the basis of need. …

The upshot of this 70 per cent cash “churn” was that the mayor increased funding to Bengali and Somali organisations by 139.5 per cent from £1.5m to £3.6m. He cut what was left for other organisations by 25 per cent overall. (An investigation is not Islamophobia, The Independent, 13th April 2014) 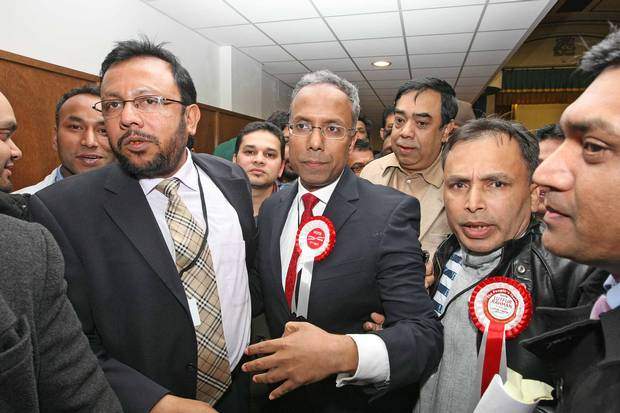 But Whites are also being looted by the over-class. Mass immigration means money flows in two directions: to non-White immigrants and to the businessmen and bureaucrats who benefit from cheap labour and new clients. The ethnocrat Lutfur Rahman is a lawyer, trained to operate in a parasitic state bureaucracy that runs on cultural Marxism and humbug. Bangladeshis like him are not natural allies of Somalis, but these groups are united by the prospect of shared loot.

And that’s what’s happening in Tower Hamlets: two groups of aliens are uniting for access to the cash-box. It was an entirely predictable outcome of mass immigration. Bangladesh and Somalia are highly corrupt Third World nations. By allowing their inhabitants to immigrate here in huge numbers, Britain’s treasonous elite have ensured that Britain has become more and more like the Third World. But Lutfur Rahman is First World in one important way. His self-serving demand for “minority rights” would be laughed at in his own religion. While Muslims gobble tax-money in a Christian nation, this is the diet of Christians in a Muslim nation:

Christians in Pakistan sentenced to death over a text

A Christian couple in Pakistan have become the latest to be sentenced to death for blasphemy, after they were accused of sending a text message deemed insulting to the Prophet Mohammed.

Shafqat Emmanuel and Shagufta Kausar, from the eastern town of Gojra, were sentenced after what the couple’s lawyer said was a case motivated by a personal grudge. …

Gojra, in Punjab province, has been the scene of religious strife in the past. In 2009 a mob attacked a Christian neighbourhood there, killing seven people and destroying dozens of houses after rumours emerged that a copy of the Koran had been desecrated. (Christians in Pakistan sentenced to death over a text, The Daily Telegraph, 7th Apr 2014)

Muslims do not behave well when they have control. And they will cause more and more trouble in Britain as they seek to acquire it. For example, a scandal about an Islamist “takeover plot” of schools in Birmingham is currently brewing — “a plot to ‘overthrow’ teachers and governors in secular state schools in the city and run them on strict Islamic principles.” Could it be more obvious that Muslims in the UK and elsewhere in the West are an aggressive, unassimilable group?

But let’s be fair: they didn’t invent the tactics they’re using to manipulate their naïve White hosts. “Islamophobia” is actually the Muslim way of saying “anti-Semitism.” For well over a century, Jews have used wails of persecution to deflect legitimate criticism of their behaviour. Muslims have watched, learned and invented a persecution-wail of their own.