What is rarely mentioned in the media and never emphasized is that Sterling is Jewish and therefore unlikely to identify with White America. On the other  hand, the New York Times apparently wants you to think he’s a Southerner, implying that his attitudes are typical of White Southerners, not Jews.

There is also virtually no mention that he rationalizes his attitudes by what’s going on in Israel. He says “‘It’s the world! You go to Israel, the Blacks are just treated like dogs.”  He says there are White Jews and Black Jews, and they are treated 100% differently.'” Which is quite true.

The media wants to keep it simple: Rich White guy hates Blacks. Keep Israel and the Jews out of it. And since we still have the First Amendment, Mr. Sterling will be punished by the private sector and by shunning and ostracism. He is now banned for life by the  NBA and will doubtless lose a lot of friends and money in the process.

Okay, that’s an important part of the story. But in listening to the tapes, it struck me that there is a subtext of sexual anxiety by an 80-year old sugar daddy concerned about his 31-year old girlfriend being seen with the Black guys that she seems to prefer as companions when not with Sterling. Quite understandable to an evolutionary psychologist. The two videos below together comprise 15 minutes of the conversation.

Sterling begins by saying that the issue is not the color of her skin but being seen in public with minorities—”broadcasting.” She says “I don’t do anything wrong. If we ever have any issues it’s because people call you and tell you things about me that are not true.”

Since she is not denying being seen in public with Blacks, the suggestion is that callers are saying or implying that she is doing more with these guys than having a photo-op at a Clippers game. That’s why she claims that she isn’t “doing anything wrong.” He then says that it’s really about a culture that he can’t change—the cultural implication that hanging out with Black guys will be seen as implying sex with Black guys—very inappropriate for Donald Sterling’s girlfriend.

His inability to change the culture is also behind his not renting to Blacks in Beverly Hills or to non-Koreans in his Koreatown buildings. He can’t change people’s perceptions, so he made a business decision.

But it’s only because she is a woman that he has a problem with her being seen in public with Blacks. When she points out that he hangs out with Black people, he says “I’m not you. And you’re not me. You’re supposed to be a delicate White or a delicate Latina girl.”

She is pointing out a double standard based on sex. Sterling is denying any general negative attitudes about hanging out with Blacks. It’s okay for males to do so, but not a “delicate White or Latina girl.” The sexual undercurrent is obvious.

But there is a racial component too. Even though she states she is part Black, Sterling wants to think of her as White or Latino. And being White or Latino means that she should not behave in such a way that people will think that she has relationships with Black men.

Sterling then says he doesn’t hate Black people, “I want you to love them — privately.”  In fact, Sterling has been a generous donor to the NAACP, receiving an award from them in 2009 and scheduled to receive another one this May until the blowup. Leon Jenkins, head of the Los Angeles NAACP, tried without success to make partnerships with other sports organizations in Southern California, but “[Sterling’s] organization was the only one that really came to the front. … “That is something that shows— I don’t want to get into the good or bad — but it shows there’s a consciousness about the plight of African Americans and Hispanics.”

On the other hand, it’s fine for him as a male to be with Blacks. At 6:34 he says “they can be with me all day long and all night long,”and at 7:02 “I love the Black people.” About Magic Johnson, “I’ve known him well and he should be admired. …  But don’t put him on Instagram to see so they have to call me.” For Sterling, having his attractive young  mistress being seen with Black males looks bad; he doesn’t want people calling him about it. Embarrassing.

He then says that there’s “nothing wrong with your skin color” and asks “Why are you saying these things?” He seems genuinely perplexed and hurt. “You really know how to hurt somebody.”

I suspect that she was saying those things and recording the conversation because she knew full well that she could get Sterling to say racially charged things which she could then use in her lawsuit. (She is being sued by Sterling’s wife.) V. Stiviano is right out of central casting for a Spielberg  movie: “I don’t know how you can have so much hate toward minorities,” to which he replies “I don’t have any hate on nothing.” 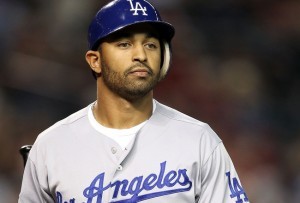 In the second video she brings up Dodger outfielder Matt Kemp, saying that he’s “lighter and Whiter than me”  (2:22). He says that it’s okay to keep him on Instagram but is hardly enthusiastic.

So in the end, I think that the main thing about Sterling is that he is very concerned with other people’s perceptions. As a businessman renting to the public, he has to be. If it didn’t affect his rental income, he would be happy to rent to Blacks. And as an elderly man with a young mistress, he doesn’t want people thinking that she is cuckholding him with the Black guys she has a history of hanging out with. Sterling probably wasn’t pleased when she was arrested for a DUI with a famous Black actor aboard.

But in the rest of his life, he gets along very well with Blacks and donates generously to Black causes. 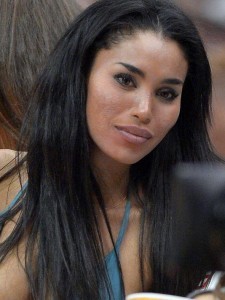 This doesn’t fit well with the simple narrative put out by the media: “Whites are evil racists.”

There is more than a little hypocrisy here. Not many Whites would want the females they are connected with to have a reputation of being in sexually suggestive situations with Black men. I’m pretty sure this would include the folks at the New York Times.