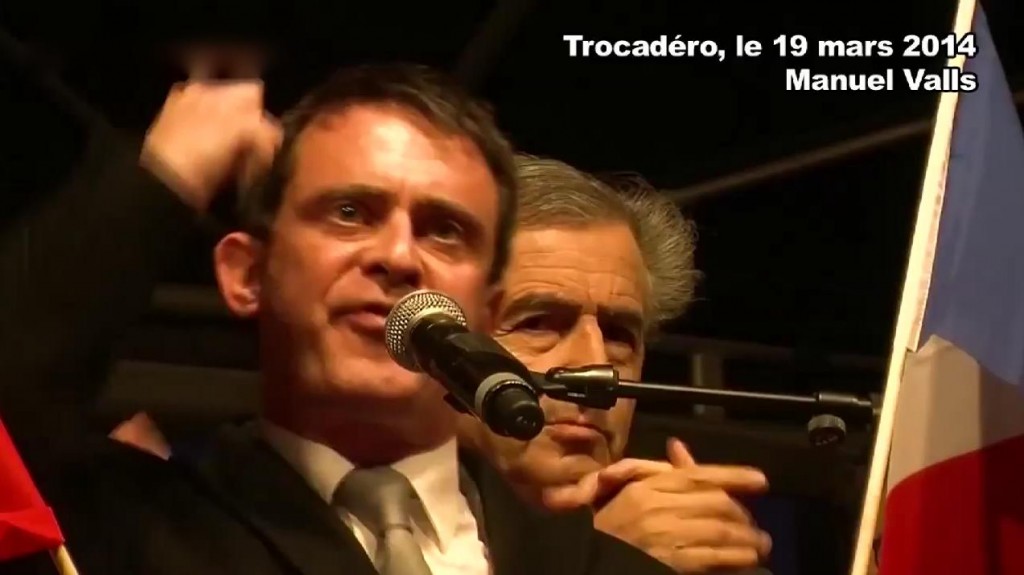 Then-interior minister and current Prime Minister, Manuel Valls tells a Jewish audience (including the Jewish Defense League) on 19 March 2014: “The Jews of France are more than ever at the vanguard of the Republic!” Bernard-Henri Lévy watches over him.

The Jewish community in France, as in most Western countries at least since the Second World War, has been remarkably successful. This very success however has brought on backlash as other groups — Whites, Blacks and Arabs — feel their interests and honor are not as well-respected by the French politico-media system.

There are an estimated 600,000 Jews in France, or just under 1% of the population. Almost half are Ashkenazim (a mix of people living in France for centuries, especially from the eastern parts of the country, and immigrants from Germany, Poland, etc.), while the rest are Sephardim, most of whom came to France from North Africa in the wake of decolonization in the 1960s.

Given French Jews’ over-representation among the country’s wealthiest, it is unsurprising that they are also over-represented among its political, media and intellectual elites.

In politics it is by no means overwhelming, although it is marked, including among super-elites. The one-quarter Jewish Nicolas Sarkozy (born Sarközy de Nagy-Bocsa) might have lost the 2012 presidential elections to Socialist Jewish politician Dominique Strauss-Kahn had the latter been able to sexually restrain himself. “D.S.-K.” had once told a Jewish publication that “I wake up every morning and think about how I can help Israel.”[2] Sarkozy instead lost to the decidedly limp François Hollande, while his replacement as leader of the center-right conservative party (Union for a Popular Movement or UMP) is the “non-practicing Jew” Jean-François Copé.

It is no secret that the Socialist government in power since May 2012 is full of Freemasons (indeed these are well-represented in most major parties), Jews and Israelophiles. These include Laurent Fabius (of a Jewish family converted to Christianity) as Foreign Minister, Pierre Moscovici (Jewish) as Finance Minister and Manuel Valls (gentile) as Interior Minister. Valls in particular has been notorious for pandering to the more ethnocentric elements of the Jewish community. When attacked by members of a Jewish audience for insufficient fealty to Israel, he angrily defended himself saying: “I am by my wife eternally linked to the Jewish community and to Israel. Come on!” His second wife (“eternally linked”?) is Jewish, although it is not clear that she is an Israeli citizen. Valls, who is the most popular Socialist politician and cultivates his image as the party’s “bad cop,” was recently promoted to Prime Minister by the hopelessly unpopular Hollande.

There are recurring videos of French politicians having to tell hostile Jewish questioners that they are definitely pro-Israel. Moscovici once defensively responded:

If I joined the Socialist Party — I who am Jewish too, French, Socialist — it was also in thinking of Léon Blum. The Blum of the Popular Front and the Blum the Dreyfus Affair. We have to ask ourselves: What would Léon Blum do today? What were the causes for which he fought? The Republic, Socialism, the Left, and towards the end of his life, it’s true, Zionism. Zionism for him was both the creation of Israel and peace in the Middle East. Peace! To respect Léon Blum, let’s be in all of this. It means a kind of fraternity. It means not throwing out the entire Left with the bathwater. It means also not forgetting a common history between the Socialists, Israel and the Jews which may have known difficulties at this or that moment, but which also has extremely strong traditions.

Jewish predominance in the intellectual world is much more striking. Jews are simply staggeringly over-represented among the pundits and “intellectuals” presented by mainstream media. While a systematic study would be interesting, one has the impression that a TV talking head in France is more likely to be Jewish than not.

These include figures on many sides of the issues facing France (discussed in Part 2):

Certainly there are major non-Jewish intellectuals. The point however is to suggest the incredible prevalence and leading roles of Jews in French intellectual public life, totally out of proportion with their share of population.

Jews are by no means overwhelmingly dominant in France’s media management and ownership, although they are over-represented. A rather large proportion of senior journalists are Jews. (Indeed, this has been recognized by Zemmour, one of the franker commentators), although the composition is constantly changing.

French media control is remarkably concentrated in a tiny group of State officials and private oligarchs, the latter mostly from the financial, telecoms, arms manufacturing and fashion sectors. Most of these industries are themselves heavily intertwined with the State as major client and/or as regulator.

In particular, TV and radio are dominated by the State and telecoms. Newspapers and magazines are owned by various oligarchs and are generously subsidized by the State (ever-more-important as readerships decline). They overwhelmingly promote globalist views in line with the interests of the Euro-French regime and mega-corporations who control them.

In short, the incestuous ties between French media empires, the state and the oligarchic elite are extreme, all interlocked in a web of ties of personnel, financial flows and mutual support, with a heavy over-representation of Jews. Oligarchization and concentration of media has increased as readership has declined, with the result that oligarchs and the State have had to increasingly bail out or forgive debt of failing publications.

This concentration means that French media are very cohesive when it comes to determining the limits of acceptable discourse. The acceptability of a topic (euroskepticism, Islam, immigration, nationalist parties…) often changes suddenly by a sort of pack mentality which seems to follow the perceived interests of the French oligarchy. This notoriously inbred politico-media nexus collectively forms what subversives in France call “the System.”

In addition, France is filled with litigious Jewish NGOs which are very active in the business of censorship, ostracism and pecuniary/legal punishment of thought criminals. These include formally Jewish organizations such as the official Jewish lobby, the CRIF (Conseil représentatif des institutions juives de France). It has become customary for the entire French political class, including the President, to hobnob with and pander to the CRIF in an official dinner once a year. Another group is the UEJF “student group” (Union des étudiants juifs de France), which also dedicates its time to policing speech.

Then there is the so-called “International League against Racism and Anti-Semitism” (LICRA). Originally founded in 1927 as a Jewish activist group, it added the “R” in 1979 and officially became an “anti-racist” group. In fact however, every single one of its five presidents since its founding has been of Jewish descent (presumably no one was qualified among the Goyim 99%?) and its Executive Bureau does not have a single person of color, being made up mostly of Jews, with some White gentiles. If one goes by skin color, the “anti-racist” LICRA may in fact be whiter than the Front National (FN), the leading nationalist party, but it spends a large amount of time campaigning against that party for its “racism.”

The LICRA took the lead in attempting to criminalize the “quenelle” gesture, regardless of whether it is used in a political or an overtly Judeo-critical context. LICRA activists termed it a “sodomization of the victims of the Shoah.” The group’s lawyers coincidentally also legally represent the Ukrainian ultra-feminist group FEMEN despite the latter’s having undertaken such outrages in France as urinating in a cathedral and chain-sawing a cross in half. Perceived Christophobia is rather more tolerated than perceived anti-Semitism…

The LICRA’s objective role in the French political system is suggested by its Honorary Committee, which is made up of a mixture of top Jewish intellectuals (Finkielkraut, Bernard-Henri Lévy, Élie Wiesel) and France’s leading politicians across the mainstream political spectrum (Chirac, Bayrou, Jospin, Fabius). In short, the LICRA is something of a partnership between litigious Jewish ethnic elites and inbred Euro-French political elites: the groups Jewish elites don’t like (notably the Front National) tend to also be those who threaten the political elite’s hold on power. Few things are as effective in marginalizing someone in France than suing them for hate speech and tarring them with the brush of anti-Semitism. The media, being intertwined with the regime and disproportionally Jewish, tends to uncritically follow suit with the usual mob mentality.

[1]The richest is Gérard-Louis Dreyfus, who has long lived in the United States as “William” (“as a symbol of his integration,” according to Wikipedia) and is father to former Seinfeld star Julia-Louis Dreyfus. There are also at least four members of the French branch of the Rothschild family among the 500 richest Frenchmen. It’s a small, networked world!

[2]As an aside on this casual elite ethnocentrism, Strauss-Khan’s wife Anne Sinclair was asked in 1979 whether she could have married a non-Jew, she replied: “I don’t think so…”