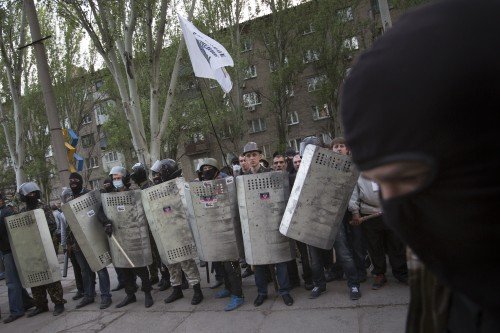 Returning to the events in a few (out of over a dozen) regions of eastern Ukraine, then there is a saying amongst many Ukrainians that, regarding Ukraine, the Kremlin is a slave to its own propaganda. It essentially creates its own myths and acts those myths out in real life as if they were somehow close to reality. One of the biggest myths the Kremlin created is that speaking Russian in Ukraine means having more loyalty to the Russian Federation than Ukraine.

This is why the Russian mercenaries have received so little support from the local population in eastern Ukraine. Even the commander of the Russian-funded mercenaries in eastern Ukraine (himself a citizen of the Russian Federation) stated quite clearly during a speech posted to You Tube that essentially, no locals are joining his ranks to “fight Ukrainian nationalists”  (why not Ukrainian liberals?) — despite being provided with money and modern weapons. In fact, he stated that “those who join our ranks usually just get weapons, take some money and go home to rob shops. We provide people the opportunity to fight Ukrainian nationalists, but they would rather stay at home and drink beer.”

Eastern Ukraine in general is the more liberal region of Ukraine, and the Donbas region — the only eastern region of Ukraine where Russian-funded mercenaries have not yet been driven out — is by far the most liberal region of the country. Before these events, the leader of Donbas, who is now supporting the Russian mercenaries, even stated that “a gay parade would take place peacefully in our region.” (Incidentally, I hate constantly using homosexuals as an example, but the organized modern homosexual movement is simply a symbol of the dominance of liberal elites in Western societies that are hostile to the traditional peoples, cultures and ethnic identities of all European peoples.) In fact, as usual, only nationalists (and also members of Churches) went to protest the possibility of a parade in Donetsk. None of the current “anti-Western” movements were seen, nor were activists of the “Donetsk Peoples Republic.”

The local governments of the region, most of which now support the Russian mercenaries, have been actively bringing “diversity” to the region as well. Yet, who protests illegal (and not only illegal) immigration to the region? Perhaps the Kremlin might finance some movements to keep the region Slavic? Of course not.  As usual, it is only nationalists who do such things. Mass protests have been led by nationalists (typically the Svoboda party) throughout the region against illegal (and not only illegal) immigration — despite intense opposition from the local governments.

What is the reason for this? Why is it only Ukrainian nationalists who actively oppose the spreading of modern pseudo-Western values in the region — the modern public gay culture, pseudo-multiculturalism (true multiculturalism can only be obtained through friendship of nationalist states, not by mixing populations throughout the world), and so forth? After all, a large percentage of the population, despite not actually fighting themselves, does indeed support the foreign mercenaries funded by the Kremlin, just like foreign mercenaries in Syria have some support by the locals. Surely, they would want to oppose Western values at any opportunity?

The reason for this is quite simple. The people who support the mercenaries are not anti-Western or anti-liberal as Kremlin-funded propaganda aimed at the West claims (or they would have shown anti-Western attitudes before these events); in their essence, they are not even pro-Russian as Kremlin-funded propaganda aimed at those inside the Russian Federation claims (or they would actually go and fight). They are driven by a hatred of anything and everything Ukrainian. While exceptions do exist, by in large they are the offspring of those brought to eastern Ukraine an attempt to ethnically cleanse the region — the offspring of KGB and NKVD officers brought to eastern Ukraine throughout the Soviet Union to pacify the local population. They resemble not Russians from Russia, but denationalized Western Europeans or Americans and it is from this perspective that they view local people who are proud of their identity. Essentially, the conflict is between Ukrainians and Ukrainophobes; those who don’t even recognize Ukrainians as a people and those who view themselves as Ukrainians. The mercenaries only have a strong presence on the ground in regions of Donetsk that are largely not inhabited by Ukrainians.

Comparing anything happening in eastern Ukraine with what happened in Kyiv is nonsense. In Kyiv, there were almost a million people on the streets for over three months. In eastern Ukraine, there have not even been any major pro-Russian protests with over a few thousand people.

Up until now, the government has not been arming the locals, the Ukrainians — the overwhelming majority of the population. This is the primary reason the mercenaries have been able to capture numerous buildings — combined with an almost total betrayal of police in eastern Ukraine (most of which were formed by the previous, Yanykovych government) and strange pacifistic tendencies from the army (many attribute this to there not being an official president in Ukraine who would take responsibility for such attacks until the May 25th election). The Ukrainians of the region — the overwhelming majority of the population — up until now have simply been afraid. In American terms, essentially it would be as if heavily armed White anti-Whites appeared and started patrolling typical suburban streets.

Many Ukrainian nationalists have signed up to fight the mercenaries. The interesting thing one notices almost immediately is that many of these nationalists are Russian speakers — yet have complete loyalty to Ukraine and Ukrainians. The Right Sector movement itself recently stated that 40% of its movement is composed of Russian speakers, and its official press secretary is even an ethnic Russian.  In fact, legions of ethnic Russians from Russia have even been formed to fight for Ukraine — something that completely bursts the bubble of Kremlin-created myths regarding Russian speakers in eastern Ukraine and the myth that Ukrainian nationalists hate Russians. Speaking Russian in Ukraine is not a sign of loyalty to Russia.

Regarding the conflict itself, I don’t think much needs to be said. The Ukrainian army has been successively destroyed since the beginning of the 2000s — first by Viktor Yuschenko, and then by Viktor Yanukovych. The ironic thing is that Ukraine produces some of the most advanced military technology in the world — everything from technology for satellites to tanks. Yet since not enough money is given to the military, this technology is usually sold abroad. It has taken a while for the military to get used to fighting a well-trained, well equipped enemy. Essentially, they are fighting elite Russian special forces — some of, if not the best in the world.

What makes things harder is that mercenaries have captured very strategic regions in densely populated areas — any mass scale attack would lead to thousands of civilian deaths and millions of dollars of losses in infrastructure. Virtually no heavy equipment can be used — the bulk of the fighting needs to be done ground solider vs ground soldier in a very urban environment. A full scale Russian invasion is very, very unlikely —due to the state of the Ukrainian army, it would probably take Russia only two or three months to defeat the regular army. Yet, due to the presence in the army of quite modern, in some instances (particularly anti-tank and anti-aircraft), equipment — this means the Russian Federation would have to use its navy, air force, regular troops and tanks to defeat the Ukrainian army. It would easily lose at least a few navy vessels, at least 30 or 40 airplanes, hundreds of tanks and thousands of troops. This amounts to billions of dollars in losses which is something the Kremlin is hardly ready to sacrifice when victory would only result in a large scale partisan war soon after that could ultimately lead to the bankruptcy of Russia. 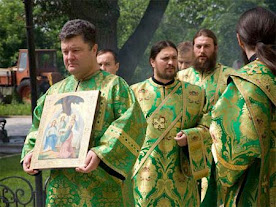 Just recently, elections in Ukraine took place. They were successfully conducted in every single region of the country, with the exception of two regions of the Donbas region of far eastern Ukraine.  The new President of Ukraine became Petro Poroshenko. Of course, this is disappointing. It is true he is an oligarch, and this has often been mentioned in Kremlin-funded propaganda. What is not mentioned, obviously not by accident, is that he is also an active member of the Moscow Patriarchate of the Orthodox Church and has even served as a deacon. Not only Putin, but even Dugin himself does not take such an active part in the Orthodox Church — maybe it means that nationalists should actually unite around Poroshenko?