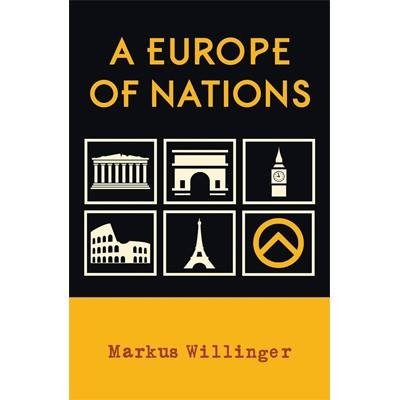 Markus Willinger is an Austrian political writer and activist who turns 22 this year. Last year, Arktos published German, English, French, Italian and Swedish editions of his first book, Generation Identity: A Declaration of War Against the ’68ers, of which a good review can be found here.

Willinger’s new book, like his first, is an indictment of Europe’s current rulers written in the second person, as if addressed directly to them—an effective polemical device. In thirty-two chapters he catalogues the many ways in which the European Union has betrayed the interests of the nations it rules.

We may begin with economics, since the masters of the EU think almost exclusively in economic terms—and view with incomprehension their subjects who do not: “No work in Southern Europe? Then the Southern Europeans should simply go north. Simply leave their relatives, friends, loved ones, homes, and roots behind.”

It was this naive economism which led them to believe that a common currency would guarantee unity and internal peace. It has, of course, done just the opposite. As a consequence of its high productivity, Germany is forced to subsidize less productive states in Southern Europe, rewarding them for their lower productivity. Naturally, Germany wants a say in how its money is invested in the South. Germans see the transaction as parasitism; Greeks see it as a violation of their sovereignty. Both parties are correct.

nothing damaged [European] unity more than this forced imposition [of a single currency]. As is so often the case, forced proximity led to mistrust, rage and conflict, at first between governments, and finally between entire peoples. We need to awaken the nations from their trance and disabuse them of the belief that someone else will take care of everything for them. This belief, this passivity which reigns today, is the reason for the rapidly progressing downfall of our continent.

Narrowly economic thinking also explains the Eurocrat’s endorsement of a Transatlantic Free Trade Agreement which, given disproportions in size, would inevitably result in decisions affecting Europeans being made in Washington, DC, according to standards not accepted by Europeans; e.g., “European consumer protection is often considered interference in the free market in the US.” The kinds of resentment created by the Euro will then extend across the Atlantic.

The perception of human beings as interchangeable units of productive capacity also lies behind such massive follies as the attempt to integrate Turkey into the EU and to remedy demographic collapse with mass immigration.

If you had your way, Turkey and presumably half of North Africa would have long since been part of the EU. [But] belonging to a civilization can’t be negotiated, nor can it be ‘decided’ by a bilateral agreement. Turkey doesn’t belong to Europe, doesn’t even want to. What Turkey really wants is to expand its power and influence on our continent. In every conflict of interest with the European countries, the Turks could mobilize the local Muslim minorities for their cause.

It is easy enough to understand what attracts foreigners to Europe:

They’ve recognized that there is a rich continent to inherit here with considerable possibilities for personal gain. But Europe’s wealth is something that must be earned and created anew every day by Europe’s peoples. If the Europeans die out and Europe is settled by people from elsewhere, Europe’s wealth will sink to the level that currently prevails in their lands of origin.

Willinger is putting his finger on what logicians call the fallacy of composition. An individual Turk or African can often improve his economic situation by moving to a wealthy European country. It does not follow that unlimited numbers of such people could improve their situation in the same way. As their numbers increase, and the native European share of the overall population dwindles, the continent’s productive capacity inevitably erodes.

Willinger also makes the important point that the integration or cultural assimilation of extra-European immigrants, commonly seen as the more moderate alternative to multiculturalism, is actually a redoubling of the insanity begun by immigration: “[First] you demand that we give up our homelands to foreigners, which you insist is open and tolerant. Then you demand of the immigrants from the East that they give up their culture and values to become like us.” Only deportation—territorial separation—is fair both to the immigrants themselves and to Europeans.

The correct response to demographic collapse is, of course, “a healthy and robust family policy. Our Europe will be a Europe of families. It will once again recognize the family as the foundation of the state, and restore its rightful and valued position.”

The Eurocrats are very fond of the word “democracy,” but they consistently oppose democratic procedures when these would present an obstacle to their plans: “With the Lisbon Treaty, you didn’t let a single nation other than the Irish vote, and when the Irish said no, you bribed them into compliance.” If Willinger were a little older, he would remember a similar technique applied to Denmark in 1992 when it failed to ratify the Maastricht treaty. Where possible, the EU leadership prefers to avoid referenda altogether:

You know quite well that the peoples of Europe don’t share your opinions. It’s precisely for that reason that you won’t let us decide about the things that are truly important. You’ve made a mockery of democracy and stripped it of its substance, and now you dare to represent your critics as enemies of democracy.

For Europe’s leaders, democracy is a vague set of “values,” not a decision-making procedure. If 80 percent of their subjects reject something which they consider “democratic,” they see no contradiction in saying that 80 percent of their subjects are insufficiently democratic. Recently, when the Swiss voted against mass immigration, the EU leadership responded with attempts to intimidate the population with talk of economic reprisals. When there was talk of a referendum on Scottish independence,

you answer with objections, clauses that must be obeyed, and put up bureaucratic hurdles. This stunt was a far-reaching, thoroughly repugnant attempt to intimidate the Scots, and to fill them with terror of what might happen of they say ‘yes.’ What happens if these peoples develop a taste for democracy, and eventually can even vote on mass immigration, or—oh the horror!—even vote on you?

The one democratically elected EU institution is the European Parliament. But this is a charade; important decisions are not made in this parliament, which is

no more than an expensive rest home for politicians who have reached the end of their productive careers back home. As the euro you protected collapsed, it wasn’t the European Parliament or the European Commission that decided its fate, but the governments of Germany and France.

Willinger’s book contains sections on Russia, the Ukrainian conflict, a common European defense policy, European religion, Islam, the harmful influence of American popular culture, Euroskepticism in Great Britain, educational policy, foreign policy and much else. And he is optimistic about the future:

The only reason Brussels still governs is that only the Eurocrats have been able to offer a vision of unification. But as soon as an alternative emerges, their rotting structure will collapse on itself and lose all support.

In order to understand how cultures can be reborn, throw a glance at Asia. The civilizations of Japan and China were paralyzed and outmoded. They couldn’t develop any further, and consequently came to be dominated and humiliated by Europeans. It was precisely this humiliation that triggered the rebirth of the cultures and the modernization of their societies. Out of the ruins of the Cultural Revolution and the Second World War, the Chinese and Japanese rose again to claim their places in the world.

If Europe does free itself from bureaucratic tyranny and claim its place in the world, it will be because of clear thinking and determined young men like Markus Willinger among the generation now coming of age.