A recent paper by Marta Costa et al. found that around 80% of Ashkenazi mitochondrial DNA had a prehistoric European origin (and ruled out the Khazar hypothesis). Combined with previous Y chromosome studies indicating that  the male line is Middle Eastern, the results suggested a scenario in which Jewish males married European females after traveling to Europe.

The basic picture is illustrated in the following figure. 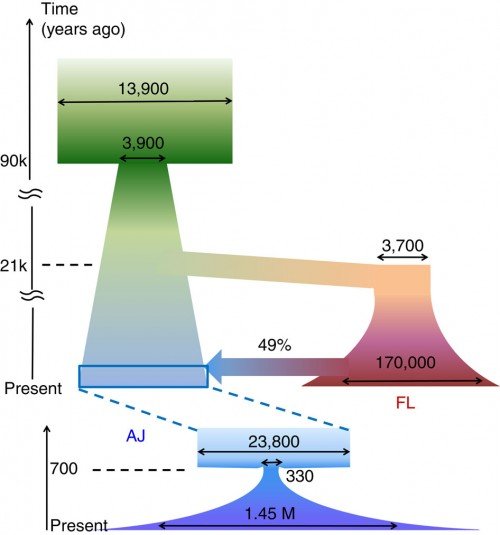 The left side of the figure at the top shows Ashkenazi origins in the Middle East (AJ=Ashkenazi Jewish), with a bottleneck around 90,000 years ago. Then around 21,000 years ago a portion of the Middle Eastern group migrated to Europe (FL = the Flemish control group) and, according to the authors, became the predominant European group. After undergoing genetic differentiation in Europe (presumably shaping the modern behavioral and intelligence profile of Europeans), there there was an influx of the FL group to the AJ group within Europe, with 49% of Ashkenazi genes coming from the FL. This was followed by an extreme bottleneck around 700 years ago when the Ashkenazi population dwindled to an effective population size of around 330 people.

This bottleneck was followed by a rapid expansion to the present: Carmi et al. conclude that there was “rapid exponential expansion (rate per generation 16–53% ….”

What this means is that, despite the lacrymose interpretations of Jewish history so common in the academic world, Jews have done very well in Europe over the last 700 years or so. Much of the Jewish population increase came in the 19th century in the Russian Empire:

Jewish populations in Eastern Europe had the highest rate of natural increase of any European population in the nineteenth century, with a natural increase of 120,000 per year in the 1880s and an overall increase within the Russian Empire from one to six million in the course of the nineteenth century.10 Anti-Semitism and the  exploding Jewish population, combined with economic adversity, were of critical importance for producing the sheer numbers of disaffected Jews who dreamed of deliverance in various messianic movements—the ethnocentric mysticism of the Kabbala, Zionism, or the dream of a Marxist political revolution. (“Zionism and the Internal Dynamics of Judaism,” p. 18)

The results fit with a really massive amount of other showing data that, as Carmi et al. phrase it, Ashkenazi Jews are “a genetically distinct population, close to other Jewish populations as well as to present-day Middle Eastern and European populations.” Ashkenazi Jews are a genetically distinct population. But given the very substantial European admixture, I would argue that the psychological distance is greater than the genetic distance. That is, traditional Jewish religious ideology emphasized the uniqueness and separateness of Jews as well as the duty to avoid assimilation and intermarriage, as well as hostility toward Christianity and non-Jewish society generally. One might phrase it by saying that traditional Jewish religious ideology exaggerated the differences between Jews and Europeans and exacerbated the degree of ethnic conflict.

As always, these results are not the last word on these topics. I noticed that another paper cited by Carmi et al. provides a conflicting theory of European origins emphasizing differences between the north and south of Europe  (“Origins and Genetic Legacy of Neolithic Farmers and Hunter-Gatherers in Europe” by Skoglund et al., Science, 2012). This paper provides data indicating that the north of Europe predominantly derives from hunter-gatherers who were in Europe before the Ice Ages (contemporary Finns are the most closely representative to these hunter-gatherers), while the south of Europe predominantly originated as Middle Eastern farmers and are more closely related to contemporary Middle Eastern groups. (Imagine voluntarily giving up territory than one’s ancestors have lived on for thousands of years; but of course, the elites imposing the immigration onslaught care nothing about the wishes or interests of native Europeans.)

The Skoglund et al. paper fits better with the proposal that the uniqueness of Western Europe stems from the legacy of an individualistic hunter-gatherers who evolved in the north of Europe and among whom groups were held together not by kinship but on reputation and conformity with the moral standards of the group.

As always, more research is needed.