I had the distinct honor of being denounced by multiple lawmakers at last week’s House Judicary Committee hearing on the “Adequacy and Enforcement of Our Nation’s Immigration Laws,” where our old friend Sherrif Paul Babeu was one of the witnesses called to testify. From the Arizona Daily Star:

Pinal County Sheriff Paul Babeu’s opinion of the state of the border and the administration’s policies was in high demand Tuesday as he testified before the House Committee on the Judiciary.The Arizona sheriff, known for his hardline stance on border security and illegal immigration, was one of four witnesses to testify during a hearing titled “Examining the adequacy and enforcement of our nation’s immigration laws.”

Pinal County is about 85 miles north of the border, but Babeu says a lot of the smuggling funnels through his county.

As proof, he said his office led a multiagency investigation that led to a $3 billion cartel drug bust and netted 76 arrests and 108 weapons seized.

“This is on American soil,” he said. “As sheriffs, where our primary job is answering 911 calls, how on earth did we get to this place?”

Since Babeu was first elected as sheriff in 2008, he has been critical of the Obama administration on border issues and illegal immigration.

On Tuesday he took issue with what he called a “mass prison break,” referring to the release of certain Immigration and Customs Enforcement detainees starting in 2013.

That year, ICE released 36,007 convicted criminal immigrants who are facing deportation. The federal data was first disclosed by the Center for Immigration Studies, a conservative group that advocates for less immigration.

As of September 2014, 16 percent had been arrested again for subsequent offenses, and 1,000 had been again convicted, Jessica Vaughan, director of policy studies for the center, testified on Tuesday, based on government records given to Sen. Chuck Grassley last month January.

Besides trying to figure out how to pronounce Babeu’s last name, most Republican lawmakers in the committee thanked him for being an eyewitness to what happens at the border.

Democratic members questioned the sheriff’s character by bringing up a protest of unaccompanied minors last July in Oracle [AZ] that activists say Babeu incited by disclosing the location of where the government was planning to take the youths. [Horrifying that American citizens actually find out where the government is relocating this latest deluge of illegal immigrants.]

Lawmakers also brought up his 2010 appearance on the Tennessee-based “Political Cesspool,” a “pro-white” radio program. To which Babeu responded that talking with someone doesn’t mean he subscribes to their beliefs or political views.

Apparently, several Congressmen took turns bashing us during the proceedings, but the clip at 2:20:20 is particularly interesting.

Here’s the background story. Arizona Sheriff Paul Babeu made a guest appearance on TPC a few years ago. He came on the show and was so impressed with our work that he invited my co-host, Eddie “The Bombardier” Miller, to personally join him for a tour of our porous border. He even publicly endorsed us as “great Americans.”

Then, of course, the media complained about the fact that he would dare talk to authentic conservatives such as ourselves, called us a bunch of inappropriate names, and Sheriff Babeu was suddenly afflicted with a dreadful case of amnesia. The story reached such a frenzy that it even became a major talking point in the GOP Senatorial primary between J.D. Hayworth and John McCain. The whole ordeal was one of the more colorful chapters in our story.

Let me first say that I truly do appreciate the stand Babeu has taken on illegal aliens, that is, except for when he’s doing stuff like this. If we had known about Babeu’s baggage we’d have not had him on. I mean, the guy apparently threatened an illegal alien with deportation if he revealed the nature of their homosexual relationship and that doesn’t get brought up by the committee, while his association with me does. How insane is that?

The fact of the matter is that I can stand someone disagreeing with me. I can even stand someone changing their mind. But I cannot stand a liar. The entire sordid affair with Babeu still rubs me the wrong way only because he lied through his teeth about not knowing of our legitimate and heartfelt positions before his appearance.

Eddie Miller personally talked to Sheriff Babeu for 45 minutes on the telephone in advance of the show, during which time he offered the Sheriff full disclosure about who we are, what we stand for, and what he could expect in response from the media.

Then after it became a talking point in Arizona, he claimed to have never spoken to us off the air and had no idea what we were about, even though he referenced the private conversation on the air with us! Sure, we’ve been betrayed before and are no strangers to having lies told about us, but this was egregious when you take into account that Eddie had phone records at the time to back up his claim.

It’s absolutely amazing that this guy will literally put his life on the line in defense of our border, then runs scared when some creepy reporters ask him about TPC. That just goes to show you the power of the “R” word, but the new scarlet letter only has as much control over us as we allow it to have.

As we’ve said before, unlike most White “men,” this type of baseless smear doesn’t make us run. We’re not “White supremacists,” or “neo-Nazis,” nor have we ever referred to ourselves as such. We are an award-winning paleoconservative talk radio program whose contributions to the community have been recognized by the Memphis City Council. We are sought-after political commentators who have appeared numerous times on national television. We’re a program of record that has been covered by over 250 prominent newspapers and magazines and one that has interviewed countless headliners and news makers. We’re pro-White, to be sure, and we’re Christians. We love our families and we are led by our faith.

The word “racist” is simply a Marxist construct, a “shut up” word used to stifle debate. We don’t give these words the power to push us around.

One of the “repugnant” views that we hold is the idea that European-Americans should seek to have more children so that we can raise our standing in the U.S. population where we are rapidly becoming a minority. Is it now “hate” to simply wish to survive? Of course not. We simply articulate on our talk radio program that which millions of European Americans instinctively believe. The viewpoints of our talk radio program are natural and healthy.

We stand tall and have become successful because we don’t allow ourselves to be intimidated by the childish tactics of baseless name calling. It’s this type of politicking that led me to write my book, Racism, Schmacism.

Just as minority groups have organizations and spokespeople that seek to advance their interests, we feel that conservative White Americans deserve to have leadership as well. We provide it, because no one else will. And we’re not about to apologize for that.

Furthermore, we have had elected officials, entertainers and celebrities of a much higher profile than Babeu come on and never pretend to be ignorant. The whole thing just left a bad taste in my mouth that still lingers upon being reminded of it.

The funny thing is that Babeu denying us, like Peter denied Christ, was ultimately a blessing in disguise, given that he turned out to be a homosexual who has been alleged to have slept with a former male student.

True heroes are hard to find these days, but I’d like to think that you have a handful of champions on whom you can depend right here in Memphis and around the country. We will never abandon or recant the righteous cause that motivates us and we will never stop fighting on your behalf. That’s a promise you can count on.

Read more about our history with Paul Babeu by clicking here. 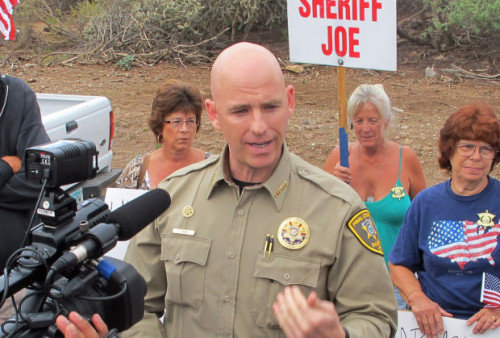