I got it wrong — the Guardian hadn’t forgotten after all. In “The Joys of Jihad,” I discussed a double murder in 2012 by an Afghan “asylum-seeker” called Ahmad Otak, who killed two young White women in an exceptionally violent and sadistic way. It was a textbook case of toxic “male entitlement,” but it was “now long forgotten by the BBC and the Guardian.”

Or so I said. I was wrong. Mr Otak turned up in the Guardian in February this year. Even more surprisingly, he was accompanied by another vibrant offender, a Bangladeshi called Adbul Kadir. These two enrichers were the first of three “case studies” of male violence against women:

Mumtahina Jannat was killed by her abusive husband, Abdul Kadir, on 5 July 2011. Kadir, 49, was found guilty of murder and sentenced to life imprisonment, to serve a minimum of 17 years. Jannat, known as Ruma, was 16 when she married the wealthy Kadir in Bangladesh, but from their wedding night until her death she suffered near continual abuse. They moved to the UK in 2002. …

Kadir became infuriated by her independence, and Jannat confided to her family that he had drugged, beaten and raped her. She was forced to give up a college course and driving lessons. Shortly after their second child was born, Kadir kicked her in the stomach after a caesarean section, causing the stitches to open up. … The abuse continued, and in early 2011 Jannat made her final bid for freedom, telling him he couldn’t return. Two days later she was seen dropping her daughter off at school. An hour and a half later Kadir rang his brother to say: “I’m in trouble.” Jannat had been strangled with her own scarf.

Samantha Sykes, 18, and Kimberley Frank, 17, were killed on 9 March 2012 in a flat in Wakefield. Ahmad Otak was found guilty of their murder and sentenced to life imprisonment. Otak came to the UK from Afghanistan to claim asylum in 2007. He said he was 15 and was placed in a children’s home, where he met sisters Elisa and Kimberley Frank, who were then 13 and 12. Elisa and Otak formed an on/off relationship that continued when they both left the home.

[W]hen Frank left Otak for the first time in 2011[,] he threatened to throw acid in her face, sew up her mouth and petrol-bomb her mother’s house, Sykes reported Otak to the police and to the UK Border Agency. “But nobody ever challenged Otak about his behaviour,” said her mother, Julie Warren-Sykes.

Frank left Otak in February 2012. On the day of the murders, she had asked him to return her possessions. Realising the relationship really had ended, he bought a carving knife, and went to Frank’s home. As he entered, he asked Elisa if she would go back to him and when she answered “definitely not”, he attacked Kimberley.

Otak then made Elisa phone Sykes, asking her to come to the flat to help. When she arrived and came into the hallway Otak set upon her with the knife, using such force that a rib was split and her neck was cut, severing the jugular and carotid artery. After the killings Otak took Elisa hostage, driving to Dover in an effort to escape to France. He was arrested when another asylum seeker raised the alarm. (‘We record all the killing of women by men. You see a pattern’, The Guardian, 8th February 2015)

The article was about feminists who are campaigning to make the government “take action to stem the rise of violence against women by keeping a database of every woman who is killed by a man.” The same feminists will, of course, be firmly in favour of mass immigration by Muslims and other non-Whites. But are even liberals at the Guardian starting to glimpse the truth about ethnic enrichment?

It’s remarkable, after all, that their first two “case studies” of male violence in Britain should be of Muslim males, who still form only a small minority of the population. More members of this dynamic demographic turned up in the Guardian in November last year. And the Guardian didn’t try to minimize the embarrassing ethnic angle, because it headed its on-line article with their photos: 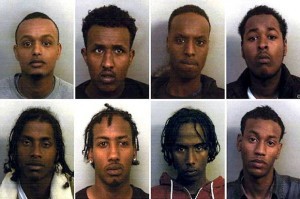 Thirteen men, all of Somali origin, have been convicted of the systematic sexual abuse of vulnerable girls as young as 13 in Bristol and officers are investigating claims against 49 other suspects. The victims, some of whom were in local authority care, were groomed and passed around by their abusers — often for money — and assaulted in homes, parks and a hotel.

One of the girls was raped at age 13 on the same night by three different men, including a stranger, and thought her life would be in danger if she went to the police. Another girl was sexually exploited after a local authority outside Bristol set her up alone in a flat at the age of 16 in a deprived inner-city neighbourhood although she had been described as having the emotional development of a three-year-old.

Within hours of arriving, she was spotted by drug dealers who set up a base in her new home and forced her to work as a prostitute. The abuse continued for months even after she told care workers about what was happening; the girl’s 14-year-old sister was subsequently raped during a visit. … (13 men guilty of enforced prostitution and rape of vulnerable girls in Bristol, The Guardian, 27th November 2014)

In the past, I’ve seen the Guardian conceal or minimize an ethnic embarrassment by not using a photo of the criminals (see “The Corrupted Kingdom,” for example). It didn’t do so for the Somali rape gang. And when another “entitled” ethnic male was convicted in 2015 of another “femicide,” the Guardian was goose-stepping again: 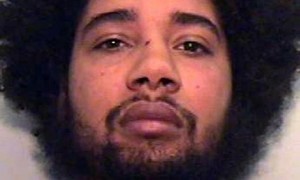 Two days before her death, Victoria Adams, 22, told friends that Andre Bright, 30, had thrown a bottle at her and degraded her by spitting in her face and taunting her that he was going to sleep with her friends. Bright’s abusive behaviour culminated in returning to her home in Oldham, Greater Manchester, where he fatally stabbed her in the chest and abdomen with a kitchen knife.

Bright was shot with a Taser by a police officer at the scene and, when warned he might be shot again, he said: “I enjoyed that. You need more volts in your Taser.” Opening the case, Mark Kellett said Bright and Adams had been in an on-off relationship since 2007 and had a young daughter, born in August 2013. On 5 December that year Adams had her first night out with friends since her daughter’s birth, the court was told.

Bright called at her home in the early hours of the next day and his alleged behaviour was said to have led his tearful girlfriend to flee in her dressing gown and bare feet to a friend’s house. Kellett said: “She told them that she had run from her house fearing that Andre Bright would kill her.”

The following night Bright was out drinking in Oldham with friends when he was refused entry to a bar. Said to be a known troublemaker, Bright — who was barred from a number of nightspots — confronted a bouncer and then attempted to urinate on him, said Kellett. CCTV footage captured the bouncer trying to push him away before the defendant pulled an Afro comb from his hair and repeatedly stabbed his face and head, causing cuts and grazes, jurors heard. … (Man jailed for 17 years for murder of girlfriend with kitchen knife, The Guardian, 23rd January 2015)

I don’t think the Guardian is turning into a White nationalist newspaper, but something interesting has happened to its reality filter. The truth about ethnic enrichment is occasionally slipping through. And when liberals start admitting the truth about race, who knows where it will end?