By Éric Zemmour, from his Le Suicide français, translated by Guillaume Durocher 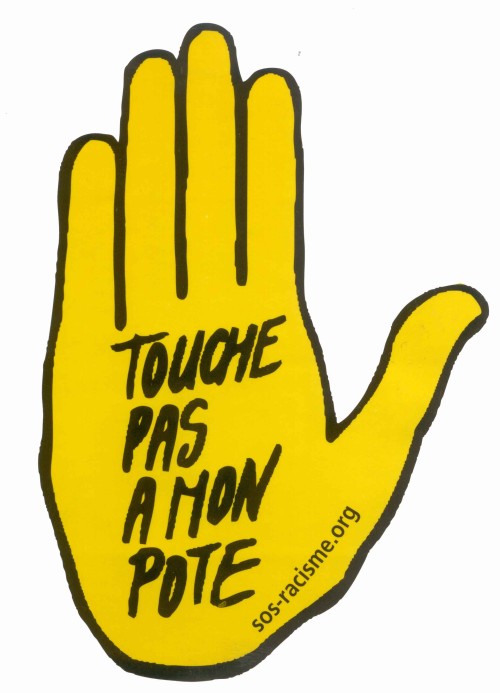 Translator’s note: It is common among American readers to suppose that although Jewish groups are quite powerful and are a critical force for immigration and multiculturalism in the U.S., this is not the case in Europe; e.g., Jews are less than 1% of the population of France.

Éric Zemmour, a Sephardic Jew as well as a prominent  journalist and pundit in France, however argues that Jewish ethnic activist and/or leftist organizations have worked to undermine the traditional French nation-state. No doubt he is the “most nationalist” voice allowed in French mainstream media, all but telling people to vote for the Front National. I found his bestselling book Le Suicide français, while sometimes false or circumspect, surprisingly frank on certain issues.

Zemmour observes that “the Jewish far-left, from the Trotskyite movements to the UEJF [Jewish student union], was at the reins” of SOS Racisme, a major “anti-racist” group. In alliance with the institutional left, SOS Racisme worked to divide the right-wing vote, to politically isolate nationalist parties (above all the Front National), to censor nationalist discourse, and to hijack incipient Black/Arab movements. Zemmour argues that SOS Racisme thus “sapped the foundations of the French nation.” Zemmour’s quote from the anti-nationalist Globe founded and financed by the Jewish left is particularly striking:  “Of course, we are resolutely cosmopolitan. Of course, everything that is of the soil, the beret, the bourrée, Breton bagpipes, in short petty-French or chauvinistic, is foreign or even odious to us.” The parallels with the history of groups such as the NAACP, the ADL, and the SPLC are striking.

The emergence of the Front National, during the municipal elections of 1983 at Dreux, would be a historic opportunity for the left to stay in power. Yet, [center-right leader] Jacques Chirac had first agreed to a union of the right.[1] Even Raymond Aron had blessed this alliance in L’Express, referring to the left’s totalitarian depravities: “The only fascist-style international in the 1980s is red, not brown.” But the moralistic, anti-racist, anti-fascist discourse of the left ended up riddling the leader of the Gaullist party [Chirac] with guilt, along with the pressures from all sides, of his centrist allies (friends of Simone Veil and Bernard Stasi), the media, and the Jewish organizations, without forgetting the provocations of the FN’s leader (“the detail of history”[2]) which were exploited well. Mitterrand thus avenged himself against the Gaullists who had long [divided the left by] isolating the Communist Party and its popular electorate in their revolutionary ghetto.

SOS Racisme was founded on October 15, 1984. Julien Dray [a Sephardic Jew and future Socialist MP] and his friends exploited the media coverage of the second “Arab march”[3] to announce the creation of their new fledgling association. The marchers were a bit less numerous than the previous year but the TV channels rushed there anyway. SOS Racisme launched its career with this media putsch, this misappropriation of glory, this usurpation.

Only Father Delorme[4] dared to denounce this kidnapping of a legacy, and the control of certain Jewish groups over anti-racist activism; but Bernard-Henri Lévy had him shut up, shamelessly exploiting Christian guilt over the extermination of the Jews during the Second World War. Terrorized, the representative of the Church became silent. The “Arabs”[5] withdrew from the game, considering they had been swindled by the “Heebs,”[6] always suspected of being more skillful and of being favored by the media. . . . [SOS Racisme’s] little yellow hand was put on the front cover of the Nouvel Observateur [the leading center-left magazine, significantly Jewish-run].

This yellow hand was the advertising creation of the spin-doctor Christian Michel; it recalled at once the yellow star which Jews had to carry in the occupied zone and the hand of Fatima, the Islamic good luck charm; it emphasized this endlessly recalled continuity between the persecution of the Jews during the Second World War and xenophobic hostility against Maghrebis during the 70s and 80s. Memories of the Occupation and anti-Arab race-riots[7] are mixed in a great historical and intellectual confusion, with deadly propagandistic effectiveness. The Jewish far-left, from the Trotskyite movements to the UEJF,[8] was at the reins. It performed a double political and ideological hold-up,[9] anticipating and precipitating a change of position in French Judaism. Ordinary Frenchmen of Jewish confession were trapped by the maneuver. The leaders of the UEJF and SOS Racisme (they were the same) refused to distinguish between the French Israelite and the Arab foreigner, uniting them together in the same victims’ position and the same hostility towards the necessarily racist and xenophobic ethnic French.[10] They thus “de-Frenchified” French Jews, destroying two centuries’ work of assimilation.

The majority of French Jews, blinded by the obsessive memory of the Occupation, compassion for victims, the seductive discourse of otherness inspired by Levinas,[11] the Jewish tradition of hospitality (forgetting that then the stranger is but a “temporary guest”), the nostalgia of the Sephardis for “life over there” [in North Africa], Ashkenazis’ growing identification with [Muslim] Maghrebi immigrants even though the former had become French notables,[12] let themselves be led on this path of “de-Frenchification.” On the front page of the first issue of the magazine Globe, a pro-Mitterrand anti-racist monthly founded by [Sephardic journalist] Georges-Marc Benhamou, financially supported by Pierre Bergé and Bernard-Henri Lévy, we could read as a declaration of faith: “Of course, we are resolutely cosmopolitan. Of course, everything that is of the soil, the beret, the bourrée,[13] Breton bagpipes, in short petty-French or chauvinistic, is foreign or even odious to us.”

This operation was not accomplished without reticence or reservations. Israelite notables excoriated in private against these youngsters who “wanted to Arabize[14] French Jews.” With the release of Roger Hanin’s film Hell Train,[15] the Tribune juive’s columnist wrote on January 11, 1985: “From this anecdotal racist event committed by three losers,[16] Roger Hanin has put together a film which tries to draw a vast moral lesson implicating all of deep France. . . . [17] Roger Hanin assures us that, as an Algerian Jew, he was taught from childhood to love the Arabs. Apparently, he was not taught to love the French.” . . .

SOS Racisme’s sponsors discovered the joys of easy money; the [yellow hand] badges sold like hot cakes; suitcases of cash from the Élysée were mixed with bundles of “Pascals”[18] distributed by Pierre Bergé, the wealthy president of the Yves Saint Laurent designer house. Then, the machine was formalized, professionalized; SOS Racisme became a formidable machine for snatching up subsidies from ministries and local government, in order to continue the political fight, and incidentally allowing their august leaders to live it large.

During the euphoria of the 1980s, SOS Racisme’s leaders thought they would replace the [traditional] flagships of anti-racism, the LICRA[19] and the MRAP.[20] They would be disillusioned. Internal divisions surrounding the veil affair of Creil in 1989[21] or on the first Gulf war of 1990, the persistent hostility of young urban Arabs towards the “Heebs,” their heated disagreements over the Middle Eastern conflict, and not forgetting the censure of the Court of Auditors which denounced their spendthrift management, forced SOS Racisme’s leaders to fall back on their “core profession”: the endless pursuit of subsidies.

Without any mass membership or any real presence ‘on the ground,’ they deployed their media activism, using the incomparable Trotskyite know-how in manipulating minds, becoming new inquisitors of the religion of anti-racism, preaching and catechizing (on television) and excommunicating, privatizing the judicial apparatus to their benefit, like new Torquemadas. In the name of the Republic, and with its sacrosanct principles held up as a shining banner, they had sapped the foundations of the French nation: secularism and assimilation. As was said during their activist youth in the 1970s: “Nice digging, mole!”[22] Their Trotskyite mentors could be proud of them.

[1] I.e., local electoral alliances between the FN and the center-right RPR party.

[2]Jean-Marie Le Pen’s term for the gas chambers, considering historians should be freely allowed to study the Holocaust.

[3]Officially the “March for Equality and Against Racism,” which the previous year had been Maghrebis’ largest ever demonstration in France, voicing their discontent and their solidarity with foreign co-ethnics. The most concrete demands were foreigners’ right to vote and the creation of ten-year residency card.

[12]I.e. noteworthy figures, generally in upper-middle class professions such as lawyers, accountants, doctors, public officials, educators, and so on.

[16]Three White candidates to the French Foreign Legion had attacked and killed a young Algerian during a drunken escapade.

[18]The name of the 500-franc bill, the largest denomination, featuring Blaise Pascal.

[19]The League Against Anti-Semitism and Racism, a much more explicitly Jewish pseudo-anti-racist group. See Guillaume Durocher, “The Culture of Critique in France: A Review of Anne Kling’s La France LICRAtisée and Le CRIF,” in press.

[20]The Mouvement against Racism and for the Friendship of Peoples, a more ecumenical body, where both Jews and people of color are prominent.

[21]A controversy over the exclusion of three Muslim girls from a high school due their headscarves.