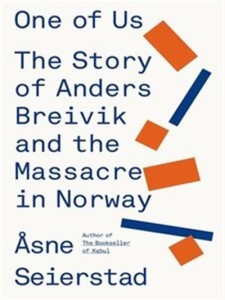 A Brief Review of: Asne Seierstad, One of Us: The Story of Anders Breivik and the Massacre in Norway, Translated by Sahar Death (New York: Farrar, Straus and Giroux, 2015).

I recently finished reading One of Us, a book on Anders Breivik by the well-known Norwegian journalist and author Asne Seierstad. The book was published in Norway in 2013. The English language edition was released this spring. July 22nd marks the fourth anniversary of Breivik’s attacks, and the subject is topical due, in part, to the June rampage by Dylann Roof. There are significant similarities and differences between Breivik and Roof.

Everyone recalls the news reports of the 2011 attacks, but this book details Breivik’s life, the events of July 22nd, and his trial the following year. Assuming that Seierstad’s account is accurate — and despite some left-wing bias, it appears to be, this can be said about Breivik:

He was not a National Socialist, nor even a racialist. He supported Israel. He was a cultural Christian. Although he did not have a strong religious faith and rarely went to church, Christianity was important to his identity. He was anti-Islam. He considered himself a revolutionary conservative and an intellectual, not a warrior.

It is unclear when Breivik became radicalized. He claimed he began planning his attacks back in 2002. Seierstad believes he became a revolutionary sometime between 2008 and 2010, one to three years before the attacks. Breivik was 32 years old in July of 2011. He had already gone through a number of transformations during his relatively brief lifetime.

In his early and mid-teens Breivik was a tagger — a graffiti vandal — and part of the Oslo hip hop scene. In his late teens to mid-twenties, he was active in the Progress Party, Norway’s neocon opposition. He attended Oslo’s Commerce High School, but failed to graduate. As with Roof, he was an intelligent high school dropout. For a time Breivik had success as an online entrepreneur. After some financial reverses, due in part to the Great Recession, he retreated into computer gaming.

Breivik’s father was in the Norwegian Foreign Service. He and Anders’ mother separated when the boy was very young. The elder Breivik was married four times and ended up estranged from all of his children — a good marker of sociopathy. Anders was living with his mother at the time of the attacks.

Breivik killed 77 people with his bomb and guns; probably 70 were ethnic Norwegians, a majority teenagers. He killed them for ideological reasons. His bomb at the government center in Oslo was a strike aimed at the ruling Labour Party. The shootings at Utoya Island targeted the party’s youth organization. The Norwegian Labour Party has Red roots, but is now social democratic. It supports multiculturalism at home and a globalist foreign policy.

One perverted and ironic element of Breivik’s violence was the killing of his own people for their ideological beliefs. Yet he himself had gone through many metamorphoses in his thinking.  To shoot a fifteen-year-old girl because she belongs to Labour’s youth group is sick. In four or five years, she might have changed her politics. Even if she did not change her beliefs, she might have become the mother of healthy White children. Breivik needed to think more biologically, less ideologically.

Was Breivik psychotic? No doubt he suffered from mental illness, but he fought against an insanity ruling, and the court found him competent to stand trial.

It was important to Breivik that he be found sane so that his manifesto would be taken seriously. One of the motivations for the attacks was to publicize the lengthy online document. This reviewer has not read Breivik’s manifesto, reportedly to be over 1500 pages. The first thousand pages have been described as a cut and paste job, the last 500 a personal testament. One purpose of the Roof shootings was allegedly to call attention to his short online manifesto.

There is no evidence that Breivik’s Knights Templar organization existed except in his mind. In fact, one remarkable aspect of his attacks was that he carried them out completely on his own. No one helped, no one even knew. With no military or explosives training, he assembled, delivered, and detonated a large bomb in central Oslo, and smuggled arms and ammo onto the island where he systematically executed 69 people. At times, Seierstad’s description of the Norwegian police brings to mind the Keystone Kops. The forensic investigation after the fact, however, was meticulous.

A couple of miscellaneous observations: There was no fight, just flight or freeze among the campers. With over one hundred young people on the island a small group armed with sticks and rocks could have, with a little organization and leadership, overpowered him. Perhaps that is expecting too much, but these youths were selected, in part, for their organizational and leadership abilities.

There is no evidence that Breivik was sexually attracted to men or boys. He had a couple of brief relationships with women including a six-month affair with a Belarusian girl. Yet some of those who met him were convinced he was gay. He was not gay, but he was narcissistic. It is interesting that even in this “enlightened” age, negative characteristics are often associated with homosexuality.

If one is curious to learn more about Anders Breivik and contemporary Norway, by all means read One of Us. It would probably be best to get the book from a library as the author is donating any profits to the En av Oss Foundation which, presumably, supports left-wing causes.