Recently I was going through some books when I came across my autographed copy of the late Senator Eugene McCarthy’s 1992 book “A Colony of the World: The United States Today.” McCarthy is best remembered for his 1968 Democratic primary challenge to President Johnson that caused Johnson to abandon his campaign for re-election. McCarthy later ran for President as an independent in 1976, and I worked as a volunteer at his Washington headquarters. 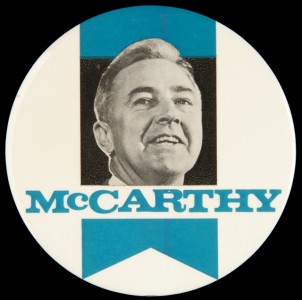 “A Colony of the World” argues that America, despite its economic and military prowess, was reduced to a de facto colonial position due to self-inflicted policies of policing the world, acting as lender of last resort, and allowing its borders to become “a mockery for all to cross.” About a third of the book dealt directly with immigration, both legal and illegal.

McCarthy defends his support for the 1965 immigration act by saying that its consequences were unexpected. It is true that the bill passed both houses of Congress with overwhelming bi-partisan support, the only real opposition coming from “Dixiecrats.” McCarthy’s explanation is interesting and informative, although it certainly does not absolve him and the rest of Congress of responsibility for the massive immigration problems that we face now, half a century later.

McCarthy places the context of the 1965 immigration act squarely in the radical social transformation that was boiling over in the 1960s:

The Immigration Act of 1965 was passed the same year this country instituted sweeping civil rights reforms. One hundred years after the Civil War, the country had finally evolved to the point where de jure discrimination against black citizens could no longer be tolerated. Amidst this climate of change and self-criticism for long-standing injustices, Congress also turned its attention to a policy that discriminated against people outside the United States. Prior to 1965, our immigration policies overtly favored immigrants from northern and western Europe and excluded, either in statute or practice, most other nationalities. Changing these discriminatory immigration policies had been a priority of President Kennedy, and like many other aspects of Lyndon Johnson’s Great Society, the Immigration Act of 1965 became sort of a legislative tribute to our slain leader. Given the political tenor of the times, the debate focused more on the evils of the old system than on the virtues of the new. The new measure sought to destroy the objectionable features of the old law.

It is interesting that McCarthy talked about a climate of “self-criticism” and the evils and objectionable features of the old system. Professor Kevin MacDonald in The Culture of Critique wrote that Jewish intellectual movements of the twentieth century recruited non-Jews like McCarthy to participate in the criticism of prevailing societal norms in pursuit of social changes that had a veneer of morality but were actually motivated by Jewish ethnic interests. MacDonald calls the 1965 immigration act a turning point in the Jewish domination of American society.

According to McCarthy, discriminating against non-Europeans in immigration via the existing national origin quota system was viewed as “repugnant,” and Congress sought to replace it with a system which placed all nations on an equal footing. This view, shared by McCarthy at the time and not repudiated in his book, ignores the reality that certain nationalities are, by virtue of their language and culture, more easily assimilated into American life.

So what went wrong? According to McCarthy, the caps were eroded away continuously on an ad hoc basis to adapt to immigration pressures that often were the result of American foreign policy. Cubans were given a welcome mat almost immediately, Vietnamese and other refugees from the failed Vietnam War were allowed in, as were people disrupted by Central American wars pursued by president Reagan. McCarthy could have mentioned the special treatment allotted to Soviet Jews, but chose to touch on neither the special privileges nor the power of Jews in America.

McCarthy did address the massive demographic changes that resulted from the law. He said the reason that post-1965 immigration skewed so much towards the Third World was that in the years after passage of the new law the economies of western Europe were booming and its population was content to stay put. Eastern Europeans, meanwhile, were not free to immigrate. So immigration came mostly from Latin America and Asia.

The next unintended impact of the law was from the family connection preferences. The top two categories for immigrants were granted to people with certain family connections to the United States. Seeing as non-European immigration had been limited by earlier national origins quotas, McCarthy and others in Congress did not expect many Asians, Africans, and Latin Americans to have the necessary family relations to benefit from these preferences.

“The thinking was that few Africans, Latins and Asiatics had the necessary family connections to qualify for these slots, thus ensuring the continuation of a predominantly European immigration flow.

McCarthy goes on to say that the third preference, which was for skilled workers, was quickly filled by professional people from the Third World, and that these people then became the ones with relatives to sponsor for the first two preference categories.

Seeing as McCarthy wound up becoming a fierce critic of the new immigration system, it is plausible the he and many others in Congress did not understand the implications of the overhaul of the immigration system that they themselves ushered in. Yet judging from the paper trail of the Jewish sponsors of the 1965 law like Rep. Emanuel Celler and Senator Jacob Javits, they very much did seek the demographic transformation that ensued.

The fact is that the since 1965, not only has there not been a continuation of a predominantly European immigration flow, the family connection system virtually excludes Europeans, as recent immigrants are obviously going to be the one with close relatives that can be sponsored, while whites (and blacks) whose ancestors have been here for several generations have no close foreign relatives.

It is also worth keeping in mind that no matter what the immigration law, there simply are not large European populations that could be tapped as immigrants that would not be leaving behind countries which themselves are vulnerable to demographic transformation from non-European immigrants.

One of McCarthy’s criticisms of the current system is that the emphasis on family connections deprives government officials the ability to decide which people with which skills will be allowed to come, and places these decisions in the hands of recent immigrants. So the thrust of policy is not what is good for the country but what is desired by recent immigrants.

McCarthy also took on illegal immigration. He said that during the early 1990s when he was writing the book, less than 2% of the million-plus illegals who crossed the border each year were deported. He also linked them squarely with the explosion of crack cocaine and other illegal drugs and crime.

He also pointed out the strain that illegals place on the welfare, education, and public health budgets. For instance he stated that “[t]wo-thirds of all babies born in public hospitals in Los Angeles at taxpayer expense are born to illegal alien mothers.”

He slammed the California legislature for passing a bill to give illegal aliens in-state tuition (which was ultimately vetoed by Governor Pete Wilson) and New York Mayor Ed Koch for his executive order prohibiting city agencies from distinguishing between citizens and illegal aliens in distributing public housing benefits. He noted with irony that this was despite the fact that both California and New York were perpetually on the verge of bankruptcy.

In his conclusion, McCarthy called for not just an end to illegal immigration (which he thought would require a massive increase in border controls), but also changing the legal immigration structures to give the government better control over both the “numbers and qualities of immigrants.” In particular, he singled out ending the priority for family connections.

It is fascinating that one of the co-sponsors of the 1965 Immigration Act would have come out with such a condemnation of the bill. While his sense of betrayal was palpable, it is a shame that he failed to connect this betrayal to Jewish supremacism. Still, it is significant that this liberal icon of the 1960s could have come out with such a clear anti-immigration message in 1992 when the issue was not yet on the radar screens for even most conservatives. It shows that, at least when presented with the right narrative, the threat posed by our current de facto open borders policy can be recognized by astute observers, be they liberal or conservative.