With her recent “counterintuitive” decision to flood her country with Third World hordes, it’s tempting to see Angela Merkel as yet another old woman slowly going batty, or as a semi-tragic figure giving into her unrealized maternal instinct by fixating it on hordes of young male Muslim migrants that even a hyper efficient country like Germany can’t handle. I have given into these temptations myself in one or two articles, simply because such narratives are often the most enjoyable to explore.

But, in addition to being seductive, such interpretations are overgenerous to Merkel, suggesting she is merely foolish, soft-headed, or unwitting, rather than black-hearted, malevolent, or purposely evil, a perception that leads into yet another tempting narrative: Angela as a Rosa Klebb-style Stasi-esque monstrosity wreaking havoc on the Federal republic because, well, that’s what arch-villains do. 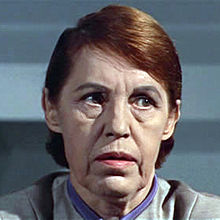 Lotte Lenya as Rosa Klebb in the James Bond film, From Russia With Love

But without these alluringly simple narratives of the post-menopausal mothering instinct or secret Stassi monster how can we actually explain Merkel’s actions in allowing what is the single most dangerous demographic change to occur in Europe since World War II?

In thinking about human motivation, the default position should always be to find some version of self-interest. VDARE’s Patrick Cleburne suggests that either Merkel has gone mad or that she has been bribed, and sides with the latter possibility. Another version of self-interest is to see Merkel as a “consummate politician” — in the worst possible sense of that word. In other words as someone essentially devoid of principle but astute at manoeuvring to improve her position. This was more or less the view of Merkel presented by the German political analyst Manuel Ochsenreiter in his recent interview with Richard Spencer, although that insight still begged the question of why Merkel would make a decision that would create a lot of trouble for any politician.

The only feasible explanation is that it was a decision conditioned by Merkel’s realization that nobody can remain Chancellor for ever combined with her post-chancellorship ambitions, which, it is widely thought, centre around becoming the next Secretary General of the United Nations.

Just a few months ago, Merkel was still toeing the official line of conventional — if somewhat lax — prudence on refugees. In July she famously reduced a “partly assimilated” Palestinian girl to tears on national TV by telling her, Nein! she couldn’t expect to automatically remain in Germany. As she said at that time, addressing the girl:

You are right in front of me and are a really nice person, but you also know that in the Palestinian refugee camps in Lebanon there are thousands and thousands and if we now say, ‘you can now all come here, and you from Africa can all come here, you can all come,’ we cannot manage that either. And so we’re in this discrepancy, and the only answer we can give is: make sure the decision [to grant asylum] does not take too long. But some will have to go back.

But here Merkel was simply playing the role of fusty old German Chancellor, a role she has subsequently neglected. It is therefore interesting to consider how her ambitions to become UN Secretary General might have clashed with her responsibilities as Chancellor and skewed her behaviour in ways detrimental to Germany.

Last year several stories emerged that Merkel was thinking of resigning before the end of her term in 2017, as in this article from The Telegraph:

She is said to be keen to avoid following in the footsteps of former chancellors Helmut Kohl, who was once as unassailable as she is now but suffered a humiliating defeat when he tried to fight an election too many in 1998, and Konrad Adenauer, who was forced out in 1963 by a coup within his own party. An arch-pragmatist, Mrs Merkel has no major policy or pet project to see through that would keep her in office. Mr Kohl was keen to see through the introduction of the euro.

At that time it was said that she was lining up either the role of UN Secretary-General or President of the European Council, as both would become due in 2017. After four non-Europeans occupying the Secretary-General office, it also seems it is the turn of a European once again.

New Secretary-Generals are usually chosen through a nebulous process of compromise, with the UN General Assembly appointing a candidate recommended by the Security Council. But while the five permanent members of the Security Council can veto any candidate, a degree of general popularity  —  or at least benign acquiescence  — is required from the numerous Third World countries that make up the bulk of the General Assembly.

Reducing a young Palestinian girl to tears on live German TV would not be looked on as ideal canvassing for the position. We can only assume that this thought must have passed through Merkel’s wily political mind.

We can also assume that, when the migrant crisis blew up, the tough action needed by Germany to nip the problem in the bud, the deployment of riot police prepared to use whatever force necessary, forcible deportations, possible economic sanctions on those countries facilitating the migrant flow, etc., would also have sent out the wrong campaign slogan for an aspiring Secretary General of the UN.

This, rather than Merkel’s supposed motherly compassion or Stasi-esque evil, may well have been what really swung the scales when she made her fateful decision to effectively remove Germany’s borders. As Christian Schnee put it in The Guardian:

Merkel may be looking for an exit strategy that earns her recognition among the international community of political leaders whose discourse she seems increasingly to prefer over the narrow-minded bickering among her local party officials and parliamentary members.

In effect what we are seeing here is an international form of the revolving door syndrome. This describes a situation in which people move between different roles that should be opposed, such as regulators and the industries affected by regulation, with the result that the decisions taken in one role are corrupted by the considerations of the second role. This is what seems to have happened with Merkel.

Her “Wir schaffen es!” (We can do it!) slogan and its ludicrous attempt to invoke the spirit of German efficiency in their own genocide is just her way of saying what a great Secretary General she would make. After all, there is no cause dearer to the Third World than the dissolution of European borders.