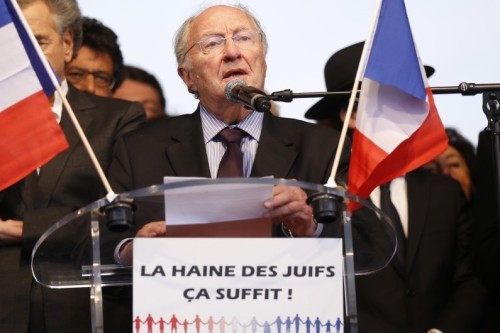 Roger Cuckierman, the head of the official French Jewish lobby (the CRIF), was invited to speak on French public radio to pontificate on the latest horrifying Islamist terrorist attacks in Paris attacks killing at least 129 people. In the “secular” French Republic, state-employed journalists apparently think being the head of a tribal-religious ethnic lobby formally representing one-sixth-of-one-per-cent of the French population is grounds for of being given ample time on the airwaves.

Armed with his supposed moral authority, Cuckierman naturally made a number of demands and suggestions:

For Cuckierman, the Paris terrorist attacks are then due to failure on the part of the French to integrate Islam (more Muslims are just fine), to social media, and to insufficient wars in the Middle East.

These are lies. Quite obviously, the ultimate causes of the Paris terrorist attacks are unassimilable mass Muslim immigration, France’s fragmentation into a Balkanized mess of mutually-hostile ethno-religious communities, and the destruction of secular Arab nationalist regimes on behalf the American Empire and Israel, leading to the creation of the Islamic State.

And who, above all else, has been simultaneously promoting mass Muslim immigration and multiculturalism in France, and has given unconditional support for Israel as an ethnically Jewish State with a Jews-only immigration policy? Why, tribal activists like Roger Cuckierman!

Cuckierman, self-styled top representative of his tribe, is a professional scammer. His “multiculturalism,” his “Islam of France,” and his “war” on the Islamic State are all scams. The fact that he supports Afro-Islamic “multiculturalism” in France and Jews-only monoculturalism in Israel shows that he full knows these are scams. Indeed, Cuckierman himself has written on how thanks to immigration:

It is clear that our children and grandchildren will live in an environment where Christian culture will have lost influence to the benefit of Muslim culture. … Demography is not only a social science, it’s especially an evolving whole of facts which modify the political and social environment in which we live. I am thinking of course of the demographic balance in Israel, like the demographic balance in France. I draw from this only one conclusion: Let us have many children!

He is fully aware of how the policies he is promoting are detrimental to indigenous Europeans and their interests.

Indeed, consider all of the endless emotional manipulation and intellectual sophistry we are so diligent in documenting here at The Occidental Observer, they are all ethnically-motivated and ultimately genocidal scams. Those of the warmonger Bernard-Henri Lévy, of the pedophile Daniel Cohn-Bendit, of the verbose Simon Schama, of the “half-thinker”[1] Emmanuel Todd, and of the self-proclaimed “chosen child of God” Abraham Foxman, are all ultimately the same. Despite or even thanks to their variations in branding, their occupying different niches in the ideological spectrum, their appealing to different segments and generations of gullible goyim (“diversify your investments”), the final outcome is the always same: They maintain their exorbitant privileges and national existence, whereas we grow ever-weaker, become persecuted minorities, and are ultimately blended into oblivion. By a thousand different ways — the liberal, the libertarian, the Marxist-Leninist, the anarcho-socialist, the neoconservative, etc., etc. — they all (with very, very few exceptions indeed) come to the same anti-European conclusion.

When will our people learn? Unfortunately our people are rather trusting (and even gullible) and are not always the sharpest with wordplay. Traditional expressions and proverbs reflect the accumulated wisdom and even the collective soul of a people. Now meditate upon the definition of the Yiddish insult “goyishe kop”: “Someone who fails to use his/her head; a dull mind. Someone who thinks like a non-Jew, [literally,] ‘non-Jewish head.’” Richard Prasquier is an Ashkenazi Jew born in Poland, as such his ancestors likely used this anti-gentile expression for generations. I tend to think such an expression could only emerge from centuries of experience scamming dim-witted goyim.[2] Prasquier, Lévy, Cohn-Bendit, etc, show the same contempt for us today.

Personally, I’m a rather conciliatory type. While political change is inevitably messy, I believe that enlightened nationalism — the simple insight that each people should be ruled by their own in their own state — can for the most part be implemented quite humanely . . . but only if people work constructively together and tribal leaders like Roger Cuckierman stop agitating for the destruction of European nations.

[2]At the risk of being rude, imagine if White parents scolded their children for poor grades by shouting “nigger-head!” Admittedly, symmetrically anti-Jewish expressions do exist in our languages. In modern French, “faire ton juif,” “to be Jewish,” means to be niggardly. In English, the noun “Jew” has given us the verb “to Jew,” meaning to scam.