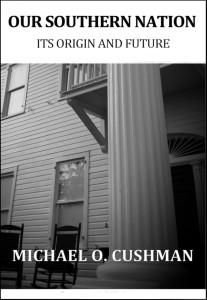 Many intellectual and political promoters of nation-state building end up on the “wrong side of history.” In fact, these are the code words used by mainstream historians when depicting those who failed in their political endeavors, lost the intellectual or political war, and earned themselves historical oblivion.

This is the main message resurfacing on the first page of Michael Cushman’s book. Being henceforth pushed into the realm of modern demonology, those on the “wrong side of history” and their hapless descendants are stripped of an objective historiographic narrative. Instead, they are forced to learn the language of the victor’s doubletalk: “reconstruction” or “reeducation.” Although Cushman does not venture into historical parallels with other European societies, one can draw a parallel between the post-Civil War South and post-World War II Europe. In his little book Sparte et les Sudistes (Sparta and the Southerners) (1969), French scholar Maurice Bardèche, himself a victim of the judicial “re-educational” process in the aftermath of World War II in France, traces the beginning of the end of Western civilization with the defeat of the South in 1865, which presaged the latter-day apocalyptic fallout in post-1945 Europe.

Cushman is clearly a serious scholar, as evidenced by the large number of footnotes and the impressive across-the-board bibliography containing citations of what are commonly described as “leftist” and “rightist” authors. Nowhere in his text are to be spotted grandstanding epithets on behalf of the Confederate Southerners or disparaging words against the Yankee Northerners. Mr. Cushman’s sober, erudite style will hopefully gain him an enthusiastic readership.

The author approach to the subject matter is highly intriguing, casting in hindsight a different light on the being and the becoming of the still strong American dream. The entire North American continent could have easily become something entirely different from what it actually became, or from what it still aspires to be in the years to come. The author realizes that history is open—that it is not a predetermined one-way street despite the all-too-frequent millenarian, eschatological, and end-times raving so often seen among those inclined to idealize America as a “city on the hill” located at the end of history. Most especially, this applies to the many neoconservative resident think tank scholars itching to spread the American dream to every nook and cranny of planet Earth—by military force if necessary.

In order to underscore the uniqueness of the birth and death of the South, the author examines its intellectual origins and its political-cultural development within the context of the “plantation civilization” encompassing the antebellum South, the Caribbean Basin, as well as parts of Latin America. The American Declaration of Independence, The Federalist Papers, and the writings of the much-venerated Founding Fathers of America, such as Jefferson and Washington, had little impact on the Southern mind. The much maligned Southern culture had in fact borrowed much from the hierarchical ancient Greco-Roman cultures, as well as from the Mediterranean-based late Renaissance period, while combining these influences with some features of modernity. Its social and economic success was based on the ingenuity of White settlers and their Promethean will to power which stressed individual meritocracy and which provided for the needs of African laborers. It was a culture of planters and cavaliers based on chivalry and honor. Of course, the picture presented by this Southern comfort was not always rosy, and Cushman should have probably added a paragraph on the many young White indentured laborers—“White slaves”—from England and continental Europe who were often subject to serious social and economic abuse during the not-so-golden period of the Golden Circle.

The common denominator Cushman chooses for the plantation civilization of which the South was once a part is “the Golden Circle.” Other than the English language, White Southerners shared little with their free-trade-minded, progress-obsessed White Northern neighbors whose mindset revolved—and still does—around money, business, and starry-eyed world-improvement. Seen in hindsight, the supreme irony of the history of Western civilization is that the antebellum South, although being geographically far away from continental Europe, had been far more successful in preserving the ancient European code of honor and the sense of the tragic than Europe itself. Much of what many European conservatives or traditionalists like to hearken back to had already been violently removed in Europe by liberal and communist revolutions that had swept over Europe in the late nineteenth and early twentieth centuries. Ironically, traditional European mores survived in a much better shape in what was once the antebellum South.

The power of ideas whose time has come is more powerful than all the power of any political process. Cushman dismisses the Hollywood stereotype of Southerners as drunken hicks and toothless boors. Indeed, he should have been more forceful in uncovering the impressive intellectual credentials and accomplishments of many Southern thinkers, such as the now largely forgotten Southern Agrarians centered at Vanderbilt University of the mid-1930s, whose apocalyptic visions of modernity bear astounding similarities to the ideas propagated by contemporary nationalists and traditionalists in Europe. He mentions on several occasions George Fitzhugh, a Southern scholar and a visionary who, a century before the Englishman George Orwell, had a solid grasp of the egalitarian mystique and who showed an unusual insight into the nature of rhetoric of the elite British of his day, which has been recycled by the American ruling class today.

Cushman’s book can be classified as a good prologue, or at least as a first chapter to his envisioned future work of his on this subject. It is also a roadmap for some other scholar willing to broaden the picture of the South. Alas, the ideology of progress, spearheaded by the modern United States, with its accompanying “re-educational” and “reconstructive” ukases against recalcitrant (“rogue”) states, has by now run its full course and is backfiring at home. The balkanized United States may soon be obliged to swallow the medicine it once forcefully administered to the South. The iron laws of nature cannot be wished away by pious preaching of the multicultural-multiracial dogma or the belief in perpetual economic growth. Neighboring Haiti, which had managed during the heyday of the Golden Circle civilization to get rid of allegedly wicked White slave masters, continues to languish as one of the most wretched spots on Earth. Its larger replica, the recently much praised post-apartheid South Africa, is being torn apart by chaos and turmoil. Similar violent fallouts from the multicultural dogmas being imposed throughout the West can be observed today in Detroit, soon to be followed by Atlanta, Los Angeles, and other cities in the United States. The good news is that history is always open, sometimes offering unexpected and pleasant surprises.