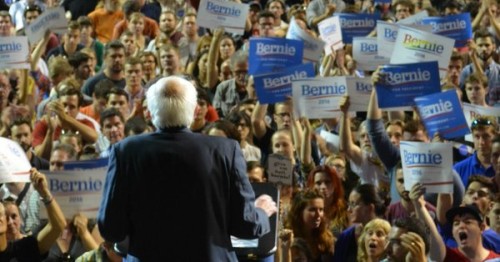 Lots of White faces at a Bernie rally

With all the attention on Donald Trump, there has been little discussion of the astonishing rift between Black and Hispanic Democrats on one hand and White liberal Democrats on the other.

Hillary Clinton has shut Bernie Sanders out of the Black and Brown voters. She is their candidate. She is catering to them to an astonishing degree. She has endorsed all the fantasies and lies about White cops killing Black males. She has hauled the mother of Travon Martin around, putting her on the stage to endorse her candidacy, and talking about how Lil’ Travon was murdered by George Zimmerman but there was no justice. She has extolled the Gentle Giant. She made statements about a breaking story about three Black coeds who claimed they were attacked by Whites on a bus who called them “nigger.” When a surveillance video from the bus revealed that the whole story was concocted, Hillary refused to retract her statements or to apologize for joining in false accusations against innocent people.

There is no limit in race-betrayal that Clinton will not go to.

Clinton is now virtually the captive of the Blacks and Browns. They cast about half the votes in the Democratic Party. They are the ones who have given her the nomination.

The White Democrats — even the wimmin — have deserted her and flocked to Sanders in droves.

Sanders has gotten nowhere in his efforts to chip non-White voters away from Clinton.

He is the candidate of the White wing of the Democratic Party.

For many years I have predicted that there would come a point at which White liberals would realize that their Black and Brown friends don’t have the slightest interest in issues that excite White liberals: gay rights, environmentalism, funding for the arts, conservation, public parks.

No. The Blacks and the Browns are only interested in “The Gimme.”

And increasingly Blacks and Browns will control and dominate the Democratic Party. Already, they are sending the White liberal Democrats to the back of the bus.

The alliance between White liberals and the racist minorities is breaking up. They are splitting.

Add in the fact that there are a lot of White liberals at the local level who have caught on that the Jews are running their own racist ethnostate and that their posturings about fighting racism and their deep, deep concern about the plight of Blacks and the need for open borders are utterly insincere.

At some point our White liberal racial brothers and sisters are going to be up for grabs.

The shizoid nature of Democratic voter behavior along racial lines shows that this is coming.

How can we reach out to them and help raise the consciousness?