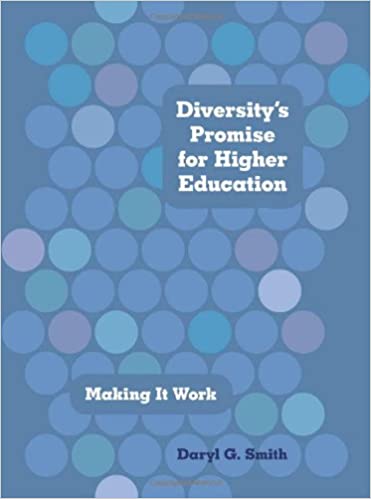 “Just as I have a privilege called walking, I need to recognize that I have a privilege called Whiteness!”  That was one of several points strongly asserted by Dr. Daryl G. Smith in her response to an audience question regarding the absence of any White Student Associations on campuses across the nation.  Prof. Smith, a Senior Research Fellow and Professor Emeritus of Education and Psychology at Claremont Graduate University, was giving her presentation at Cal State San Marcos on “Diversity’s Promise for Higher Education” to a group of about 40 minority students and a small cadre of curious community members.  Her speech and the accompanying slideshow were intended to publicize her book with the same name, subtitled “Making it Work.”

As a White man in my fifties, I sat through the twenty-minute Q and A session, particularly interested in how she would deal with perhaps the most profound issue facing American students today:  the myriad identities in today’s identity smorgasbord and how Whites should respond to it.

The professor’s walking-privilege analogy stresses that if not disabled, people are rarely cognizant of their abilities — they don’t normally recognize or even appreciate their common, typically human abilities.  In the same way, so the analogy goes, Whites don’t give a thought to the life-long perks they receive because of their European racial ancestry.

This is certainly a grave charge against White students forced to live and breathe the multi-cultural society that’s been thrust upon them. Born long after the Civil Rights Movement, they have been thoroughly conditioned and indoctrinated by forces like the mainstream media and the public education system on the evils of “racism” — but now they are told that they are still the problem and the struggle against them must continue indefinitely.Probably the most salient part of the professor’s argument is that Diversity must be an imperative.  In fact, the first slide of her presentation was headlined “The Diversity Imperative for Excellence:  Building Capacity in a Pluralistic Society.”   She brings up example after example of change that never would have occurred if there wasn’t some deliberate effort to bring it about (e.g., the demographics of the military, the Supreme Court, and astronaut selection).  Letting change happen in a more natural progression is a non-starter.   Furthermore, her adding “excellence” into her title is her way of making people think that the whole pro-diversity effort is about uncovering and rewarding excellent non-White students and job candidates. This move thereby justifies affirmative action in a way that the term ‘qualified’ would not. She seems to abhor the term ‘qualified’, implying that anyone using ‘qualified’ in this context would be guilty of prejudice or implicit bias. It’s all about achieving excellence.

Her next two requirements were that the Diversity program must be inclusive and it must differentiate.  Not only must every form of identity be recognized and included for consideration — racial, gender, ethnic, ability-based and more, but we also must never cease to break up the community into ever more diverse identity groups — differentiation without end.  In other words, diversity administrators have to be constantly on the lookout for as-yet unrecognized minorities that have had their voice stifled because their particular brand of identity has not yet been given prominence.

As a possible example, I rather doubt that transgender lesbians of mixed race with intellectual disabilities have been given their rightful place in the diversity pantheon; recognizing them would open up an entirely new category for academic hiring committees to recruit, and university administrators might even be willing to create new departments to further research on this group. And of course, since there are a lot of possible mixed-race combinations, gender orientations, and intellectual disabilities, we are definitely talking about quite a few possible categories.

Dr. Smith supported these three principles of her doctrine by discussing the various chapters of her book which, she was eager to inform us, is influencing academic departments around the world.

In an honest introduction to the crux of the problem of diversity in societies, she briefly mentioned a few failed experiments in diversity.  She mentioned but did not elaborate on the tens of millions of human deaths that were in some way associated with the formation and breakups of previous utopias of the left — the Soviet Union, Czechoslovakia and Yugoslavia.  She implied that these other experiments had their multi-cultural designs all wrong, and, according to Dr. Smith, recent scientific research points to their underlying problems.  Rather than discuss what these problems were, her goal was to help build a workable pluralistic society, something she admits “has never been achieved anywhere else in the world.”

A method she used to impress these young minority students was to talk down to them with convoluted scientific jargon presented at a fast pace that would make even your average PhDs squirm in their seat.  In the end I was convinced that following the Navy’s 1960 pragmatic KISS Principle (Keep it simple, stupid) was not anywhere on Dr. Smith’s radar screen.

One of her big points was that, as successful as some may view the last 50 years of the Civil Rights Movement, “there are fifty years of unfinished business in the diversity movement with regard to under-represented minorities.”  You see, the left is forever coming up short in the unending crusade to dismantle every aspect of traditional Western culture. The new buzzword is ‘intersectionality”, as in “How do we deal with the multiplicities and intersectionalities of the various identities?”  [Intersectionality is leftspeak for “the study of overlapping social identities and related systems of oppression, domination, or discrimination.” Again, think mixed-race transgender lesbians with disabilities — and how they are oppressed, dominated, and discriminated against by the evil intersectionality of White heterosexual males.]

Dr. Smith is quite pleased by the broad diversity she sees in the undergraduate student bodies of college campuses.  However, you’ll be shocked to hear that she thinks the present state of diversity does not go near far enough.  She is especially upset at the demographics of graduate students where she sees far less diversity.  This is a major problem in her eyes, as the future faculty and staff directors are drawn from this pool of graduates.  She insists that there must be more “diverse capacity” at the higher echelons of the education system if pluralism is going to work (clearly referencing a desire for proportional representation of all of the myriad categories of diversity).

She hints at various strategies to achieve this, including rewriting job openings to better attract and hire diverse candidates.  The professor also makes a case for “implicit bias” acting as a firewall to keeping diverse candidates of excellence from reaching their potential, stating “In recent research on implicit bias, they changed the name [of an applicant] to an African sounding name:  White males with a criminal background were more likely to get hired than an African-American male with an advanced degree.”

This seems pretty convincing if true, but the fact is that the entire area of implicit bias studies as it relates to discrimination (or any other prediction) has been Exhibit A of the replication crisis in psychology. I would add that the professor’s application of it was completely one-sided. Unconscious bias only matters as it applied to White people’s decisions, and had no implications with relation to other groups discriminating against Whites.

Meanwhile affirmative action, its anti-meritocracy methods, and highly litigious means of enforcement were still not enough to satisfy the diversity thirst of Dr. Smith.  It made me ponder how many professors and research scientists will be pleading for the same imperative when the coin is flipped twenty or thirty years from now?

Finally, I came out of this presentation affirming another thing about the word ‘implicit’:  Diversity implicitly equals anti-White, and the primary fraud in the professor’s proposition is that the “inclusive” clause makes it seem like she is concerned about all the people in an organization, university or society. But of course, it doesn’t!  So it is with this hypocritical backdrop that the questions began.