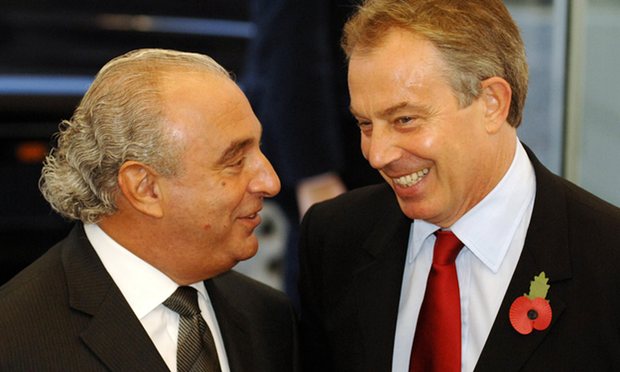 Philip Green possesses an appearance so darkly befitting a caricature that one might see it, like the stripes of a wasp, as a warning from Nature itself. But even had this son of the Talmud emerged from the womb looking like a Swedish prince his life trajectory would have still borne the stamp of his racial origins. Green was born on 1952 in Croydon, in south London, the son of a retailer and property speculator. At the age of nine he was sent to the Jewish boarding school Carmel College in Oxfordshire, the most expensive school in all of England until it closed in 1995. As his biographer Stewart Lansley points out, Green is no ‘self-made” man. Few Jews ever are — the entire concept of the ‘self-made man” is rooted in individualistic rather than close-knit societies. When his father died, Green inherited the family business at the age of twelve and had access to a substantial estate. More importantly, Green was born into a close-knit community of Jewish businessmen and speculators, all of whom had access to credit networks and financial knowledge beyond the means of non-Jews. Assured of the support of these networks, Green left Carmel College at 15 to work for a co-ethnic shoe importer. By his late teens he was travelling to the US, Europe and the Far East. On his return, at age 21, he set up his first business with a £20,000 loan backed by more communally pooled funds, importing jeans from the Far East to sell on to London retailers.

Aside from pooling funds as a group for initial capital, the Jewish ‘talent” for business is rooted in a gambler’s addictive personality and a heavy interest in speculation and exploitation. Speculation involves a high level of risk, but such risk-taking is cushioned by being enmeshed in a communal mutual aid and cooperation network, so that failure may only be a temporary setback — yet another example of the power of collectivist strategies.

Confirming my contention, I could point out that almost every historical statistical enquiry into bankruptcy statistics has found Jews to be significantly over-represented in both fraudulent and genuine bankruptcies (almost ten times the rate of non-Jews).[1] Jewish economic “genius” can thus be more accurately described as a rash drive to accumulate wealth, as well as an acute willingness to take advantage of the weak, especially those who have succumbed to debt. In 1979, Green exhibited his first stroke of such “genius” when he used his pool of funds to buy up the entire stock of ten designer label clothes sellers who had gone into receivership for extremely low prices. The stock was old and far from ideal, but he had the clothes sent to the dry cleaners, wrapped them in polythene to make them look new, and then bought a place to sell them to the public.

He soon became a commercial predator. As Britain was hit hard by recession in the early 1980’s Green went on the prowl for new shops to lay the foundations of an embryonic clothing discount chain. He used the gray or unofficial markets to import high-end garments cheaply, ignored existing trade agreements between boutiques and designers, and sold them off in tacky bargain stores with names like “Bond Street Bandit.” With the profits, he sought out more despairing retailers to prey upon. Once he occupied their premises, he would use them to sell something relatively new to the British market — cheap, Chinese-made jeans. Lansley describes Green as a “prophet of globalization,” a description that I am apt to agree with. Swimming in the profits from Chinese jeans, Green soon expanded again, this time using cheap Israeli loans.

Before long, Green and his backers had taken over almost every major British clothing retailer, forming the Arcadia Group as an umbrella organization to oversee the new empire. He was by now a billionaire. Green found himself the darling of the agents of globalism and a string of politicians and celebrities mesmerized by the trappings of wealth. Possessing little in the way of subtlety, Green became well-known for his extravagant parties, where guests included supermodels and Oscar winners, and the entertainment was live performances by the likes of Stevie Wonder and Rod Stewart, among others. For his son’s Bar Mitzvah in 2005, Green  spent over $5 million on a French Riviera party featuring performances by Andrea Bocelli and Destiny’s Child. Extravagant, of course, but money was plentiful because Green and his associates had found a way to escape paying around £300 million in taxes. 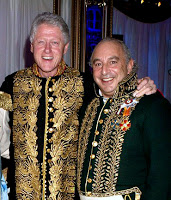 In an excellent article in The Guardian, journalist Michael White writes that British Prime Ministers Tony Blair and David Cameron were “in thrall to Green,” a man he describes as a “tax-dodging, undeserving parasite” and whose taste in material goods is “embarrassingly vulgar.” According to White, Blair was a “credulous sucker for a rich man with tax-shy habits,” giving Green a knighthood in 2006.

The advent of Sir Philip Green was a mockery indeed given that the concept of the “knighthood” originated in the Middle Ages, when it was conferred upon a man for service to his country, normally in a military capacity. By the Late Middle Ages, the rank had become associated with the ideals of chivalry, a code of conduct for the perfect courtly Christian warrior. Contrast this with our greasy merchant, who was by 2006 well-known for a tax-avoidance dividend scheme that enabled him to profit from foreign-made goods being sold in Britain, without paying any tax into the British system. Green, however, fits the pattern of other figures we have examined in that he facilitates the transfer of wealth from non-Jewish economies to Jewish micro-economies. To cite just one example, there is his £5 million donation to Jewish Care.[2]

But Green now finds national attention on him for even worse reasons. In 2000 Green acquired British Home Stores (BHS) at a time when it enjoyed a £5 million surplus. During the next sixteen years, according to Michael White, Green “milked BHS until it was on its knees.” Employing a number of complex and deeply immoral practices, this vampire withdrew over £580 million from the company, plundering every one of its assets including its worker’s pension funds. Once the company was on the brink of collapse, Green sold it for £1 to Retail Acquisitions, a hastily put-together company led by former bankrupt and fellow Jew Dominic Chappell and Jewish lawyer Mark Tasker. When BHS finally went under, more than thirty thousand people were left with an empty pension fund while Green continued to live a life of luxury in off-shore tax havens. This from a man who received a knighthood for “services to retail.”

While Britain reels in shock from these developments, I am far from surprised. I am sure that the readers of TOO will join me in a feeling of “I told you so,” though one of exasperation rather than satisfaction. We are only too familiar with these patterns of parasitic plunder. But what final conclusions can we draw? In the 1890s the German Social Democrats originated the phrase “Anti-Semitism is the socialism of fools.” The term has always amused me because socialism professes to be against the worst excesses of capitalism and yet refuses to act against that race which is quite evidently behind an inordinate percentage of these excesses. We might thus conclude, paraphrasing the Social Democratic simpletons of a century and more ago, that ‘socialism without antisemitism is the work of fools.” And may Mr Philip Green yet meet his reckoning.