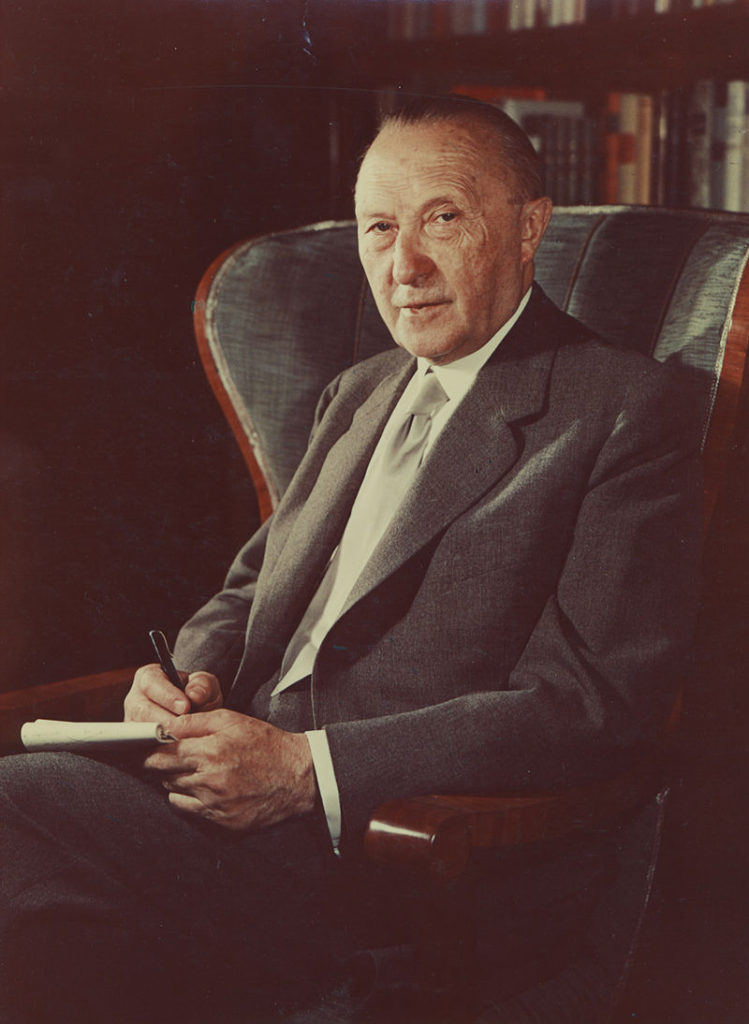 “The power of the Jews even today, especially in America, should not be underestimated.” – Konrad Adenauer, 1965.

A recurring theme in my writing is documenting the comments of mainstream European statesmen on Jewish power and influence. Given my background, this has primarily focused on French leaders. In general, as these figures approach retirement or indeed death, their tongues loosen somewhat.

In the aftermath of the Six Day War, General Charles de Gaulle publicly called the Jews “an elite people, self-confident, and dominating” and, almost in passing, noted that the Israelis enjoyed “vast support in money, influence, and propaganda [. . .] from the Jewish circles of America and Europe.” Though largely forgotten today, Jewish groups then widely attacked De Gaulle, claiming his comments would lead to “discrimination,” and even Raymond Aron, the otherwise unflappable critic of Jewish ethnocentrism, lost his composure.

Other top French politicians have complained of suffering from pressure and defamation at the hands of ethnocentric Jewish media-political networks. This is, in a word, the unmentionable “lobby-which-doesn’t-exist.” Prime Minister Raymond Barre, nearing the end of his life, spoke out on the radio: “The Jewish lobby, not only concerning myself, is able to organize operations which are disgraceful. And I want to say it publicly!” President François Mitterrand spoke in private, on his last day in office, of “the powerful and harmful influence of the Jewish lobby in France.”

These are not marginal figures. De Gaulle led “Free France” during World War II and laid the founding myth for the nation’s emergence as a nominal victor from that conflict; he founded the Fifth Republic which is still in place. Mitterrand was one of principal founders of the European Union.

And now I discover that the situation appears to be similar with our German neighbors across the Rhine. I was watching an interview (text here) given by Chancellor Konrad Adenauer and was astonished by the following passage (roughly translated):

Now concerning the Jewish question — I may perhaps understand your question as: Why was the Jewish question always referred to and acted upon as an extremely important issue [by my government]? First, from a sense of justice. We had done to the Jews so much wrong, we had committed such crimes against them, that they had to be somehow expiated or had to be made good if we ever again want to win repute among the nations of the earth. And furthermore, the power of the Jews even today, especially in America, should not be underestimated. And therefore I have very deliberately and very consciously — and that was always my opinion — put all my strength, as best I could, to bring about a reconciliation between the Jewish people and the German people.

Adenauer makes this statement purely in passing — in between an exhortation on Franco-German reconciliation and another question from the reporter — as though it were unremarkable and indeed assumed by all-knowing individuals. He gave the interview in 1965, when he had been a few years in retirement and was indeed very old.

Adenauer, like De Gaulle and Mitterrand, is a founding figure in the current German regime, the Federal Republic of Germany. He was the postwar Federal Republic’s first chancellor for 14 years and was responsible for “rehabilitating” the country in the eyes of Western governments. Adenauer was supposed to be the living proof that Germany had overcome its National Socialist past and had become a true democracy (in fact, the Federal Republic continues to be an extremely authoritarian regime when it comes to stifling the Right).

Adenauer’s comments on Jewish power are thus very significant. His key observation — “the power of the Jews even today, especially in America, should not be underestimated” — led him to advise reconciliation. Adenauer recognized that getting on good terms with Jews and in particular with the American Jewish community, was a sine qua non for Germany to be redeemed in the eyes of the Western powers and thus be allowed again into the “civilized world.”

Adenauer’s observation leads to further questions: How has such a tiny group, only 2% of the U.S. population, acquired power “power [which] should not be underestimated”? How is it fair for such a small group to hold disproportionate sway over the destiny of the country? How is that fair for the 98% of Americans who are not Jews and are thus relatively powerless in their own country? The grip of ethnic lobbies over the U.S. government is also extremely important for non-Americans, given the enormous influence of the U.S. as a uniquely multifaceted superpower both during and after the Cold War, particularly in Western Europe and the Middle East.

A successful politician is nothing if not a realist. Adenauer’s statement implies the following: That the submissions of many European politicians — whether in affirming the moral supremacy of the Shoah as a kind of civil-religion and the relative secondary importance of European suffering, the defense of the Jewish ethno-state of Israel despite the latter’s constant violations of international law and human rights, the enforcement of anti-nationalist and anti-revisionist censorship, the marginalization and criminalization of nationalist parties, and ultimately the promotion of displacement-level immigration and multiculturalism — are not motivated by some moral principle, but merely submission to the powerful forces that make or break “democratic politicians,” including the Western world’s most powerful ethnic lobby. Today still, one can see very clearly how new and still-insecure Western-oriented regimes (one thinks of Poland or Romania) face enormous reputational and political costs in the West and in particular the United States if they do not submit to Jewish lobbyists’ desiderata (particularly concerning Shoah remembrance, persecution of nationalist groups, and immigration/multiculturalism).

The most intolerable and neurosis-inducing thing about Jewish privilege and ethnocentrism is that one is expected to not only to tolerate and even cater to it, but also to never even mention it!  Anyone who does will be shouted down, defamed, ostracized, persecuted, and ruined, justified by labels such as “anti-Semite,” “neo-Nazi,” “conspiracy-theorist,” and so on. And yet, even the most foundational figures of our current, most politically correct order — figures like De Gaulle, Mitterrand, and Adenauer — could plainly see and had to work with the reality of Jewish cultural, financial, and political power.

Gilad Atzmon has argued that the omertà on Jewish privilege and ethnocentrism is the central aspect of Jewish power.

Such an enforced taboo is particularly intolerable given that the privilege and ethnocentrism of any group — and particularly one as privileged and ethnocentric as Jews — is liable to undermine the interests of other groups. This is evident particularly the case for white gentiles — who are often systematically demonized in the reigning culture, are massively underrepresented in many key institutions like the Ivy League universities, and are ultimately losing their homelands — but also for other groups, such Muslim nations being destroyed by Israel and its Western collaborators.

We like to hope that the Internet is breaking the censorious stranglehold that Jewish and/or liberal media outlets have had on these issues. YouTube videos featuring Adenauer’s statement on Jewish power have accumulated over 200,000 views. Such an “anti-Semitic” statement, pronounced by anyone else, would no doubt be grounds for imprisonment under Germany’s draconian censorship legislation (recall that in “democratic Germany” the 87-year-old grandmother Ursula Haverbeck was recently sentenced to 10 months in prison for thought crimes). But, presumably, it is not yet illegal to quote the founder of the Federal Republic.

The truth therefore has a way of trickling out, bit by bit. Even in Germany — with the incredibly rapid rise of the anti-immigration and anti-Islamization party Alternative for Germany, which may well overtake the Social Democrats to be the country’s second-largest party — at least a first breakthrough is occurring.