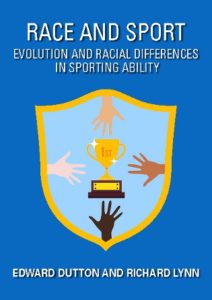 The Ulster Institute’s latest study in human differences will come as a pleasant surprise to those who have complained about their previous somewhat narrow focus on IQ. Race and Sport is not the first book to venture into the taboo area of innate racial differences in athletic aptitude, but it is the most thorough and systematic so far.

The ice was first broken by Jon Entine’s Taboo: Why Black Athletes Dominate Sports and Why We’re Afraid to Talk About It (2000). Numerous publishing houses rejected this work before it could see the light of day; some publishers were explicit about their fear that discussion of innate Black superiority in sport would lead inevitably to genetic explanations for low Black intelligence. A more serious objection to Mr. Entine’s thesis is that there are many sports Blacks do not dominate, and not all of these are winter sports (where an environmental explanation might be convincing).

Dutton and Lynn see reason for cautious optimism in the relative lack of furor surrounding the more recent publication of David Epstein’s The Sports Gene: What Makes the Perfect Athlete (2013). Epstein accepts that athletic ability is partly genetic in origin, although he does not focus on this matter.

There also exists a significant body of literature proposing various social and environmental causes for racial differences in athletic achievement: discrimination, role models, stereotype threat, and so forth. Dutton and Lynn devote a chapter to eleven such theories, briefly explaining why each is unconvincing.

The present work distinguishes four basic racial groups—Europeans, Northeast Asians, West Africans, and East Africans—and describes the peculiarities of each group as they relate to athletic performance. Most other populations can be treated as clines between these main groups.

Three fundamental body types, or somatotypes, are distinguished: (1) endomorph, or fat and stocky; (2) ectomorph, or slim; and (3) mesomorph, or muscular. Actual persons are commonly mixtures of these three types in variable proportion.

East Africans, or more specifically those whose ancestors lived in the highlands of East Africa for an evolutionarily significant period of time, are similar in many respects to West Africans, but are more ectomorphic, with greater lung capacity, more efficient processing of oxygen, and more slow-twitch muscle tissue. These traits make them well-adapted to long-distance running. Since the 1960s, a single East African group, the Kalenjin of Kenya, have come to dominate international long-distance running competitions despite a tendency to invest modestly in training. Their homeland lies 8,000 feet above sea level.

Europeans fall between West and East Africans with regard to lung capacity and the distribution of fast-twitch and slow-twitch muscle fiber. They fall between Africans and Northeast Asians in many other traits. They have superior upper-body strength and a tendency to endomorphy. Field events such as shot-putting and hammer-throwing are dominated by Europeans, especially Northern Europeans.

Northeast Asians are even more endomorphic than Europeans, with a thicker layer of subcutaneous fat and less muscle tissue. Their strengths include quick reflexes, flexibility, and visuospatial skills. The sport in which they are best known for excelling is table tennis, but badminton is even better suited to their particular strengths.

Dutton and Lynn examine women’s sports as well. Since men are better at all kinds of athletic contests than women, the women who achieve at the highest levels tend to be less feminine than average. Also significant are racial differences in sexual dimorphism: African women and others from tropical regions are less distinct from their men than are women closer to the Arctic.

Dutton and Lynn examine data concerning the best male and female performers in over fifty sports and compare them with predictions based on the physical traits of each of these racial groups. The results are extremely impressive, although they provide no proof that the predictions were made independently of the data by which they are tested. This is an issue mainly in regard to ad hoc explanations of exceptional cases; in the main lines, the predictions that would follow from racial differences are clear enough.

Chess is sometimes considered a “mind sport,” and success is heavily dependent on intelligence. This explains the massive overrepresentation of Ashkenazi Jews among grandmasters. Intelligence may also explain why Whites continue to dominate quarterbacking in American football and coaching in basketball, sports otherwise dominated by Blacks.

Certain sports even seem to favor clinal subgroups or crossings over any of the four fundamental racial groups. Cape Coloreds and South Asians are well-represented among successful cricket players, and this may be due to their middling physiques, in which neither ectomorphy not endomorphy nor mesomorphy predominate. Might this also apply to combined events such as the decathlon and the pentathlon? The authors provide no data for such competitions.

Pacific Islanders are massively over-represented in high-level rugby because of their upper-body strength and a low center of gravity, which makes them difficult to tackle. Persons from near the Caucasus Mountains are well-represented among Olympic wrestlers, possibly due in part to their representing a cline between Europeans and Asians.

The authors do not neglect environmental and cultural factors. These explain such phenomena as continued Japanese success at judo and Korean success at taekwondo, sports more naturally adapted to the strengths of other races. The overwhelming popularity of wrestling in the Caucasus region may also play a role in the success of wrestlers from that region. Little need be said concerning the dominance of Scandinavian countries in winter sports, and for this reason, the authors do not lay much emphasis on such competitions. The success of Blacks in Canadian professional ice hockey demonstrates that such environmental factors can be overcome under the right circumstances.

Success in high-level international athletic competition is not a matter of great importance in the broad course of civilization, but it is of considerable interest to a large swath of the general public who will never look at IQ studies. A popularization of the present study’s results might do more to break through the embargo on discussion of human genetic differences than the rest of the Ulster Institute’s catalogue combined.