Anyone wondering about the priorities of Mrs Theresa May should follow her actions from the moment she learned she was to become Britain’s next Prime Minister.
Her first act was to sign a pledge committing her to remember the Holocaust and “stand up to hatred and intolerance”. And her second  was to spend the evening before her confirmation by the Queen at a private dinner at the home of Chief Rabbi Ephraim Mirvis.
Whatever else awaits the British people, they can be under no doubt that their new leader is once again a true Friend of Israel.

In a parliamentary career marked by cowardice and a tendency to go along with whichever political wind is blowing, it is hard to say which has been Mrs Theresa May’s most inglorious moment.  Was it her decision, as Home Secretary, to throw open Britain’s borders and allow immigration to arise to record levels — after being elected specifically on a promise to reduce it?  Perhaps it was her plans to target “non-violent extremists” via blacklists, internet free-speech restrictions and movement bans?

For many nationalists, the most egregious moment in this wretched woman’s career came in a speech she gave at the Finchley United Synagogue in April 2015 when she defiled the memory of British servicemen killed in Palestine 1939 — 1948 by praising, instead, their Jewish terrorist killers.

So as today we celebrate the independence of the state of Israel and pay our respects to those who have fought so hard for it…. We remember the sacrifice of those who fought to achieve and protect that independence….

Thus the woman about to become the British Prime Minister tarnished the sacrifice of an estimated 784 British servicemen, police and crown officers killed in what is — for the Friends of Israel — one of the most embarrassing episodes in British colonial history (see Note below). She did not even have the decency to deliver this stab in the back behind closed doors.

Understandably, there has been much glee in the Jewish press over the elevation of such a devoted Friend of Israel to the position of Prime Minister. The Times of Israel said she was widely regarded as a good friend.

But of all the contenders to follow David Cameron — both from the Conservatives and other parties — it is the 59-year-old Maidenhead MP who boasts the soundest track-record on Jewish concerns.

Much like her touring of Tory associations nationwide, Mrs May’s appearances at communal dinners and meetings with Jewish groups have been carried out both frequently and quietly.

On that score, her history of supporting Jewish initiatives is strong. Last July there was a speech at Hasmonean High School’s annual dinner; two months later she met Board of Deputies president Jonathan Arkush; and then there was the aforementioned CST dinner…

It was Mrs May who, last December, stood in for David Cameron at the Downing Street Chanucah party, lighting the menorah alongside Chief Rabbi Ephraim Mirvis. Little could she have dreamt that this year she would be repeating the feat as Prime Minister herself…

Mr Cameron has been lauded as the most philosemitic premier since Margaret Thatcher. British Jews will now hope that the second woman to hold the keys to Number 10 will follow in the footsteps of those two predecessors.

It was the Charlie Hebdo massacre in Paris that gave Mrs May the opportunity to demonstrate that the welfare of the Jewish community was at the top of her priorities. Most of the Charlie Hebdo victims were non-Jewish but that detail seemed to escape Mrs May. Or maybe it was just not important. She said at the time “I never thought I would see the day when members of the Jewish community in the United Kingdom would say that they were fearful of remaining here in our country. And that means that we must all redouble our efforts to wipe out anti-Semitism here in Britain.” 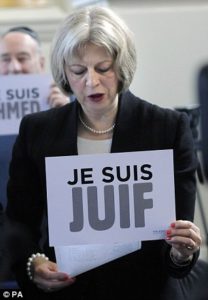 Warming to her theme she said “without its Jews, Britain would not be Britain,” and then she said “Jewish people have long been an important and integral part of this country”.

Asserting that “the safety of the Jewish people can never be taken for granted,” Mrs May said it is a “tragic fact of history that the Jewish people have had to protect themselves against repeated attempts to obliterate them.”  She even repeated David Cameron’s words that, “If the Jewish community does not feel secure then our whole national fabric is diminished.” Fine words, if only the White communities of Rotherham and elsewhere could find someone to defend their interests with as much passion.

There was another curious boast during that Finchley speech which came at a time when prosecution of “historic” war crimes is still popular in Germany and elsewhere. For Mrs May said she was proud of changing the British law to make it impossible to prosecute Israeli war criminals in the UK under Universal Jurisdiction, so that alleged killers such as Tzipi Livni and Israeli officers involved in crimes against Palestinian civilians can roam free in Britain. Pro-Palestinians in Britain applied in court for an arrest warrant issued for Livni who was Foreign Minister during Israel’s brutal 2008 Operation Cast Lead operation but thanks to the intervention of the British government, automatic immunity was granted to Israeli government officials visiting Britain.

But that later Finchley speech showed even more shameless self-abasement. Mrs May complimented Israel’s leading role in combating human trafficking, and omitted to mention the abuse of Palestinians and its expulsion of African workers from the Zionist state.

It was also an occasion on which Mrs May declared her allegiance to the so-called “Community Security Trust,” a Jewish vigilante body. Four months ago she was given a standing ovation at the annual CST dinner for handing over £13.4 million of British taxpayers money to this sinister organisation which claims to protect Jewish schools and synagogues. (This figure represented a £2 million increase on the figure promised by David Cameron the previous year which in itself was an increase of £3 million on the year before that!)

Not long after Britain joined the international commitment to defend Charlie Hebdo’s freedom to satirize Islam, Theresa May’s Home Office began a prosecution against a White nationalist called Joshua Bonehill for publishing Holocaust cartoons on the internet.  Bonehill was sentenced to three years and three months of imprisonment and has since been charged in prison for two-year old “race hate” tweets against a Jewish MP, the fragrant Luciana Berger.

There are numerous examples of Mrs May’s cowardice but most recently she showed a lamentable talent for failing to give leadership when the situation most called for it during the EU referendum debate. Instead of defending her position in the Remain camp she kept her head down and was invisible during the campaign. A gross dereliction of duty by any standard.

The elevation of Theresa May can be seen as the mirror-image of the fate of her opposite number. The end game has now surely begun for Jeremy Corbyn, the embattled leader of the Labour Party.  Normally it would be good riddance — Corbyn is an odious open borders  internationalist and loud enthusiast for flooding Britain with the Third World. In every way then, Corbyn someone who would normally be acceptable to the political elite. Except one — his sentimental attachment to the one group of people he does feel some affinity for —  Palestinians. This has set him beyond the pale of our political puppet masters, so Corbyn has to go.

It looks as if his defenestration may come at the hands of a veteran leftie.  In their political outlook, leadership challenger Angela Eagle is pretty much indistinguishable from Corbyn but is shrewd enough to stay away from the Middle East. She voted for the Iraq war and two years ago was one of a handful of MPs who voted against recognising the state of Palestine. Significantly the Times of Israel reported that she recently met a delegation of Jewish students to pledge her committment to fighting anti-Semitism.

One of the most entertaining aspects of the media coverage around all this concerns the questions that journalists are scurrilously avoiding asking. Such as, if it had not been for the entirely fabricated anti-Semitism scare, would this Labour leadership contest be happening? Of course the answer is no, because the rise of Theresa May and the fall of Corbyn are due to the same reason — that it is as unthinkable that we could have party leaders unacceptable to the Jewish lobby.

NOTE: As we have noted before, the story of the Palestine Mandate and the casualties that the British suffered, is one that the authorities are only too eager to drop down the rabbit hole.  The British must not be reminded of the deaths inflicted by Jewish terrorists against British servicemen throughout World War II. This terrorist campaign was also vigorously conducted as allied troops landed on Normandy and fought their way through France.

The casualties included a 25-year old gunner called Harold Yates from Sheffield whose death may be attributable to the presence of a Zionist “fifth column” in Britain which gave the go ahead for the attack in which he was killed.  A veteran of Dunkirk, he was guarding a railway junction when he was shot down by terrorist wearing British army uniforms.  The attacks on British servicemen were acts of treachery that can be compared with the bombing of the USS Liberty.

The atrocities also included the King David bombing in which 91 were killed by the Irgun organisation. Also there was the savage killing of 20-year-old sergeants Clifford Martin and Mervyn Paice.  The two men were kidnapped, held for 28 days and then strangled. Their bodies were left hanging in a eucalyptus grove and were booby trapped with land mines.