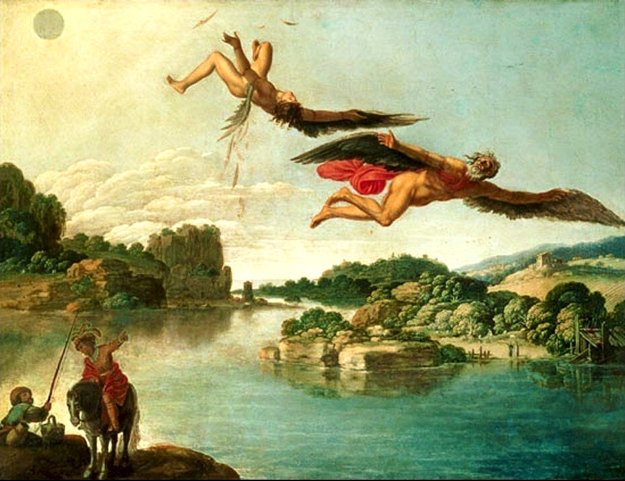 Physical blindness and the verdict of ignorance, meted out to envious politicians in Dante’s epic poem, can often be bliss.  Eyelessness can have advantages, as demonstrated by the blind, poor, uneducated, self-effacing, albeit very intelligent seer, Tiresias, who is brought to the court of King Oedipus, only to announce to him his eyeless future of blind destiny (vv 364-377).

For that matter willful ignorance and dismissal of the brainwashing curriculum in the modern educational system in the US and EU can be a sign of a healthy state of mind. What on earth is to be seen in the political process in multicultural America and Europe today? What good can be learned in multiracial colleges in Europe, whose program consists of lessons on White man’s guilt? For centuries, in order to avoid envy-inducing temptations, high-IQ young introspective White European males opted for monastic life. The harmful side of monasticism was that it prevented good genes to be passed on to future offspring, thus leaving the political arena open to an array of genetic and character misfits: the bad, the ugly and the envious.

Lengthy is the list of authors, usually associated with the heritage of cultural conservatism, who have prodded into the roots of envy-driven politicians. Highly envious politicians are usually very cunning individuals, with above average IQ, possessing, in addition, good skills at camouflaging their moral sleaziness with an aura of tearful humanitarian palaver. They also excel at expressions of sympathy for the plight of their future prey.

This brings to mind is the huge literature on so-called Jewish social mimicry, aka “trickster-do-good-Jews” (“Mauscheljuden”), popularized in National Socialist Germany by the works of Theodor Fritsch and Arthur Trebitsch, and scores of other writers.

It would be a serious error, however, to reduce the art of impersonation to Jews only. Envy-ridden White politicians have thrived in abundance in Europe and America, and their best literary embodiment is found in Shakespeare’s Richard III, a supremely intelligent miscreant, who, when left alone with his monologues, takes extreme pleasure in calling himself a supreme villain, all set to eliminate his next of kin.

And therefore, since I cannot prove a lover,
To entertain these fair well-spoken days,
I am determined to prove a villain. (Richard III, Act 1, Scene 1)

Examples of virtue, passed down by sages and held for centuries as a symbol of moral goodness, are essentially an elegant cover-up for self-deception and fake commiseration. This is how the French seventeenth-century essayist François de La Rochefoucauld sees social reality in his satirical aphorisms about the army of jealous and envious politicians hiding beneath false charity and feigned compassion.

La Rochefoucauld’s influence on future European cultural pessimists was immense.  Friedrich Nietzsche’s own aphoristic style and his own acerbic words against the danger of the rising tide of egalitarian ideologies of the later nineteenth century, is closely patterned on La Rochefoucauld’s prose. Outbursts of feigned magnanimity — the hallmark of many French nobles of the seventeenth century — provide a timely example for understanding the similar make-believe humanism of the modern liberal ruling class, including modern American cuckservatives.  On the one hand, they love to show off empathy for disfranchised fellow Whites; on the other, they are keen on keeping to themselves in their gated communities.

A critical approach to the pretend humanism of the elites was a popular subject among French authors in the seventeenth century. Traditionally their literary legacy was associated with the intellectual baggage of the so-called anarcho-nationalists and revolutionary conservatives; today, it is linked to the work of the New Right and Alt-Right respectively. Those French classics are important because their description of seventeenth-century elites hiding behind trendy facial mannerisms and grandiose self-righteousness can be projected on the corrupted behavior of contemporary homegrown elites in the US and EU. The unfolding chaos in the West, however, cannot be blamed on the incoming armies of Muslims or any other group of non-European migrants. Those who started the chaos and those who are now stoking it are decadent White elites who keep importing non-European migrants.

It is fairly easy to spot an envious villain if his character deformity is accompanied by physical depravity, as seen in Richard III. A similar envy-ridden character appears in Friedrich Schiller’s drama The Robbers in the person of the wicked, crippled, yet highly intelligent Francis, who endlessly schemes how to destroy his better looking and virtuous brother Charles and his entire family:

Why did I not crawl the first from my mother’s womb? why not the only one? why has she heaped on me this burden of deformity? on me especially? Just as if she had spawned me from her refuse.  Why to me in particular this snub of the Laplander? these negro lips? these Hottentot eyes? (Act 1, Scene 1)

The wicked Francis is an epitome of the in-group infighting among Whites. Such infighting has taken diverse forms of political expression over the last few millennia. In the face of ongoing foreign racial and cultural replacement, however, the laudable desire to reestablish White identity does not guarantee at all that Whites will dispense with their mutual envy, treachery and civil wars. Modern sociobiologists still need to examine why civil wars are more brutal than wars against well-demarcated and segregated out-groups. Far more dangerous than outgroups are character defects when they surface under the guise of the same phenotype, same idiom, and same racial entourage, as has been observed countless times in Western political history. In the same vein, many Whites make a major mistake by using insulting terms against African and Middle Eastern migrants storming into Europe, forgetting that the treacherous or self-hating Whites who are bringing them in are the ones to blame.

In the near future one can expect that feelings of mutual envy and hidden resentments will not disappear from transgenderized and miscegenated Europe and America; instead they will only take on alternate forms. Many intelligent remaining Whites will become indispensable leaders in dysfunctional non-White multiracial regimes. They will, however, be confronted with an age-old reality: they will either share their political power and work spaces with lower IQ, less individualistic non-Europeans, or they will face the haunting challenge of enduring the presence of envious, scheming, high-IQ White rivals. In America and in Europe it is a widespread practice in affluent White households to hire non-White handymen or nannies, the implicit assumption being that a non-White will never measure up to the cognitive appetites or excessive ambitions of a White employee. Feigned docility of South Asian and Latino women is often in demand by sexually frustrated White bachelors in Europe and America. Those non-White females, in quest of the improvement of their socio-racial status, know how to hide their envious behavior much better than single White females. White males, mistakenly, see them as no threat — as long as they stay out of White wedlock.

Historically, an implicit social consensus for a racially segregated society has functioned fairly well despite the bad press and academic vilification it has been subjected to over the last 50 years. In hindsight, the segregated American South and the apartheid regime in South Africa were functional and stable societies, where each racial group knew its place. It was the rise of egalitarian ideologies, imported from the West, which prompted non-Whites to start fantasizing that they could henceforth be whatever they wished to be. The tragic results, both for ingroups and outgroups, are visible today.

Under the credible assumption that in the very near future multicultural America and Europe will face major disruptions and face large scale foreign-inspired terrorist incursions, it would be naïve to think that Whites can be militarily defeated. Even a very small number of Whites can put up powerful resistance against a far larger military might of non-Whites. The major problem, however, resides always inside the gate and not outside the gate, as was observed time and again in European history, and as was recently illustrated by Harold Covington’s novels. Germanic Gepids sided in the mid-fifth century with invading Asian Huns, just as a thousand years later Muslim-Turkish incursions into the heart of Europe could not have occurred without the logistical support and diplomatic blessing of Catholic French monarchs. Stalin owed his military success in 1945 to thousands of Marxist intellectuals who had laid already the intellectual ground for the subsequent communist killing fields.

The present times are just a low-level protraction of the ongoing civil war among Whites, pausing briefly in 1945, only to continue today with sporadic unarmed and intellectual clashes between White Antifas and White nationalists. Those who must  always be watched with caution, writes the philosopher Emile Cioran, are the alleged best friends of ours:

If our deeds are the fruits of envy we will understand why the political struggle, in its ultimate expression, boils down to calculations and intrigues that are conducive to the elimination of our rivals or enemies…. Do you need a right target? Well, start then by killing off all those who reason according to your categories and according to your prejudices, those who have travelled the same road with you and who inevitably dream how to replace you or shoot you. These are the most dangerous rivals; focus on them only, others can wait. If I were to get hold of power, my first care would be to eliminate all friends of mine. (french original, p. 1009)

Sounds shocking and surprising? Not at all. All of us, at least once in our lifetime, if not millions of times, have prayed to see our congenital rivals perish in a car accident or by having their towns firebombed. The second civil war among Whites, known as WWII, and is present sequel today, testify to that.

Dr. Tom Sunic has written several books on Europeans, their heritage, and the current crisis.