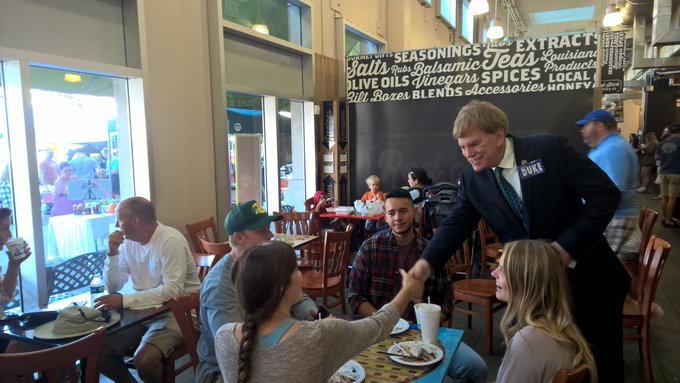 David Duke is running for United States Senate in Louisiana. We should all support him. He has voiced strong support for Donald Trump and has qualified for a televised debate that will be held on November 2. Duke is sure to stand out in this debate as the only candidate who is speaking to the very legitimate fears and concerns of the traditional White majority as the immigration onslaught continues to erode the ability of Whites to defend their heritage. A win by Duke would be a “shot heard round the world” — an indication that Whites are standing up for their interests and are not intimidated by labels like “racist” or “ex-Klansman.”

Money is desperately needed to fund advertising during the final days of the campaign. Please do what you can by donating at the official campaign website, DukeForSenate.com.

Labeling Duke “the ex-Klansman,” which is how the mainstream media typically refers to him, is nothing more than the usual guilt by association argument. After watching David Duke’s videos and reading his writings, I decided that I agree with the vast majority of what he is saying. His main mantra that he repeats at the beginning of every radio show is that all peoples have a right to a homeland and to have sense of peoplehood—what Frank Salter terms “universal nationalism.” The problem, of course, is that only White people of European descent are enduring a suicidal wave of non-White immigration that will make them relatively powerless and victimized minorities in areas they have controlled for hundreds, and, in the case of Europe, many thousands of years.

As do I, Duke repeatedly calls attention to the hypocrisy involved in the mainstream Jewish community and activist organizations. In the Diaspora in the West they  advocate multiculturalism and massive non-White immigration, while steadfastly promoting Israel as a Jewish ethnostate where Jewish racialism is alive and well.

While people like Duke must live with the label of “ex-Klansman” in the mainstream media, supposedly reformed far left radicals and even terrorists like Bill Ayers are welcomed into polite society and have positions at prestigious universities.

We have to understand that David Duke is a talented politician whose greatest achievements may lie ahead.