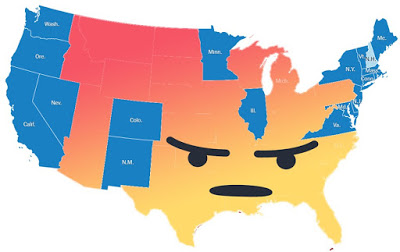 There are always a number of ways to read data, and especially data from something as vast and complex as a US Presidential Election. In fact, the devil is in the detail, but one can also get lost in the detail, like a wanderer lost in a swamp (that needs draining), in which case more can be learned by zooming out and taking a macro view.

If we look at how the election turned out using the rather simplified map above, some interesting patterns emerge: the two main ones are:

Now, let me just add that this is at the level of state and Electoral College. Black voters still have enormous impact at the more “micro” level of cities and counties, as we see in places like Detroit, Ferguson, and other “enriched” urban areas, where they leave the unmistakable mark of their r-selected character.

In the above map, however, the Black vote is only apparent in a few places—Virginia, Maryland, and Illinois—and even here there are significant other factors that perhaps contributed to the Democrat win even more. For example, Virginia is now a typically “blue” state thanks to Hispanic immigration and White professionals in college towns and in government jobs. Without that it would fit into the pattern it once had and which is still apparent in the White-dominated states further south.

The Hispanic vote, by contrast, is much more visible on this map. One reason that California is a Democrat “lock down” is because the largest demographic is the Hispanic one. But also, check out Nevada, New Mexico, and Colorado. All these were once White-dominated states that, because they had few unionized industries, as in the big White Democrat states in the North East, naturally leaned Republican. But soaring numbers of Hispanics on the voter rolls have turned them from red to blue.

In 1970, Nevada was only 5.6% Hispanic. Today it is over 26%. The same story is at work in Colorado and New Mexico, namely a solid Democrat-voting demographic (Hispanics) pushing a soft Republican demographic (Whites) into the Blue Zone. Indeed, for all these states—California, Nevada, New Mexico, and Colorado—we can say that “turning blue” through Hispanicization is their dominant characteristic, which means that at the macro level the Hispanic vote simply can’t be ignored, dominating as it does much of the left side of the map.

By contrast, the Black vote has become almost invisible at this macro level. This is surprising because Blacks are almost as large a minority as Hispanics nationally (13% to 17%). But the difference is that, where there are large numbers of Blacks, they tend to cancel out their impact on the political picture by creating a process of polarization, in which Whites vote reactively in ways that effectively counter their influence. While working class Whites may well vote Democrat in states where there are few Blacks, in states with many Blacks they vote the opposite way to Blacks.

This is the story of the Black Belt, an area of Black majority counties that runs through several states. While greatly adding to the Democratic vote in states like Mississippi, Alabama, Georgia, and South Carolina, the Black Belt also pushes Whites in those states to vote in such a way as to largely cancel it out. Hence these states vote Republican at the macro level, and the Black vote is rendered “invisible.”

In the case of the Hispanic vote in the West, however, this does not happen. Democrat-voting Whites by-and-large stick to voting Democrat. This suggests much greater White acceptance and tolerance of Hispanics. For this reason, when the percentage of Hispanic voters increases, it merely adds on to the pre-existing White Democrat vote in those states, with the result that those states turn blue. Populations of Asians also seem to work in this way. The end result of this is that Democrats are able to build winning electoral coalitions in these states and then proceed to implement increasingly anti-White policies.

While this seems to be the case in the West, in the Midwest, there is some indication that increasing presence of Hispanics resulted in surge of Trump support. Trump was able to break into the upper Midwest—the blue wall, as it has been called—by increasing GOP support in an area that was subjected to major Latino influx in recent years.

The Wall St. Journal presciently had focused on that region about a week before the election. Census data showed that during the past 15 years, counties in the region surrounding where Wisconsin, Minnesota, Iowa and Illinois meet had shown “among the fastest influxes of nonwhite residents of anywhere in the U.S.”— largely Latino immigrants starting to move into formerly all-white areas, they found.

Those same counties had shown great support for Trump in the GOP primaries. On election night, that area was where Trump made many of his biggest gains, accounting for his victories in Wisconsin and Iowa and the unexpectedly close result in Minnesota. (David Lauter, “Why did Trump win? Democrats stayed home”)

The different ways in which Whites react to Blacks and Hispanics was also the basis of the Republican Party’s successful Southern Strategy, which was essentially an anti-Black strategy. Now with Democrats eating into the GOP’s Western territories, something similar is required with regard to Hispanics. The Cuckservative wing of the party hopes that it can convert Hispanics to GOP values, and of course there are some, especially Whiter Hispanics, such as Cubans in Florida, who can make the change. But overall it is a losing strategy.

A more promising strategy would be to stoke up fear or at least distrust of “the Other” among Whites, by reminding them of the different interests of different racial groups and by pointing out the link between a rising non-White demographic and its “exploitation” by an increasingly anti-White Democrat Party. Discussing IQ differences between Whites and many immigrant groups that will prevent them from thriving in an advanced society like the US is likely a bridge too far for many Whites, but it certainly should be broached in some outlets.

At a more politically viable level in the present context, if done skillfully, the Republicans could still pose as the “non-racist party” and keep claiming that the “Democrats are the real Racists” because of their very explicit encouragement of identity politics for non-Whites, a pretence that may still be necessary to enable many White voters to vote their ethnic interests.

We live in different times, and with the Southern Strategy of the 1960s and 1970s, the Republican Party did not have to do much, except signal hard on law and order and highlight the Northern Democrat betrayal of its Southern White voters to achieve its strategic goal of seizing the Southern states. Today, the way to pursue this strategy is to highlight the threat of globalism and cheap migrant labour. But also, interestingly, the dying mainstream media in its quest for ratings and controversy is adding to the mix by effectively alienating many Whites by constantly stoking up hatred and violence with its  “Trump is literally Hitler” schtick, effectively laying the groundwork for White voters to vote reactively to Hispanic infiltration the same way that Southern Whites learned to vote reactively to Black empowerment  in the “Civil Rights” era.

If rising numbers of Hispanics on the voter rolls could push Whites to vote for the other party, as they do when faced with large numbers of Blacks, this could shore up support for the GOP in Rust Belt states won by Trump and also win back states like Nevada, Colorado, and New Mexico, as Whites are still the largest groups there. In New Mexico, for example, Whites are 40% of the population compared to 28% Hispanic. But the problem here is simple: Whites just feel a lot more comfortable around Hispanics (and Asians) than they do around Blacks, with the result that their racial and ethnic defences are disarmed.

In one sense, Trump’s rise to the Presidency, with its outreach to minorities may be seen as an attempt to stifle the rising ethnocenric/raciocentric nature of US politics, or at least it was a signal to Whites to make them more comfortable voting for Trump. But thanks to the Leftist media, Trump’s rise is now being framed as a symptom and a driver of the rising ethnocenric/raciocentric trend, something that will only empower this aspect of it.

In such an environment, White racial awareness is sure to grow, and when it does, the notion of voting in a racial coalition for the Democrats against the interest of Whites will become increasingly problematic. If that happens soon enough, a White reaction could make the Hispanic vote as invisible at the macro level as the Black vote now is.