What’s been going on in Texas since the end of the NPI conference, Richard Spencer’s much-commented-on speech, and “Hail-gate,” is hard to believe. An absolute media meltdown by the Dallas Morning News, followed by Texas Aggies fleeing to the world’s largest “safe-space,” 100,000 seat Kyle Field (A&M’s giant football stadium), when it was announced that Richard would be speaking to a couple hundred people elsewhere on campus.

I would put this in the Comedy section if TOO had one, but this will have to do.

Immediately before the conference, articles started appearing in the Dallas Morning News about the rich-kid, preppie, White-nationalist from St. Mark’s (Dallas’ most prestigious private boys school and Richard’s alma mater) who was now one of the chief leaders of that dangerous, hateful new group — the Alt-right — earnestly denounced by Hillary as an egregious threat to the Republic in a widely publicized speech during the campaign.

After the NPI conference, all hell broke loose. Angry mothers of current St. Mark’s students wrote letters to the DMN editor, bewailing that the same “wonderfully diverse” school their darlings attended could inexplicably produce such a monster, and begging the paper not to associate Richard’s name with St. Mark’s, lest it queer their sons’ chances of being accepted at Big Ticket U. The St. Mark’s headmaster publicly disavowed Richard, the first time the school has ever done this to one of its graduates. Feeling especially in need of atonement, the St. Mark’s class of 1997 launched a campaign to support refugees in order to repudiate Spencer, raising around $40,000.

Other anti-Alt-right articles have been appearing daily. Yesterday there was a long complaint, “I won’t let neo-nazis dictate what little fashion sense I have,” where some manlet reporter whined about Richard and his buddies making the “fashy haircut” (long on top, very short on the sides) a symbol of “white-supremacy,” but he would bravely go ahead and retain his own fashy haircut, because it looks nice. Also yesterday there was a general rant against White racism by DMN’s “culture critic.” Both articles included pictures of Richard in various poses, in various outfits. They all hate him, but they all admit he’s photogenic. 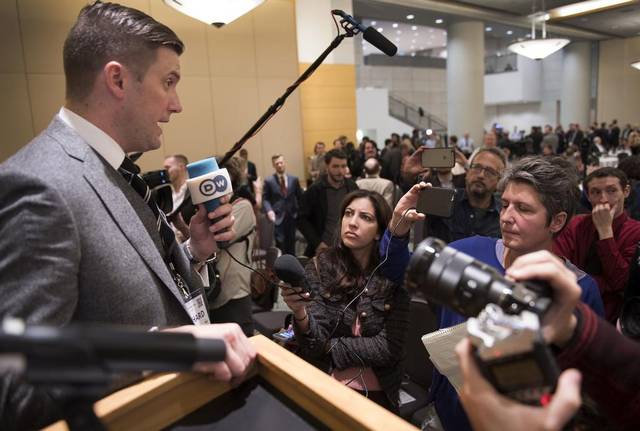 The last DMN article yesterday was the announcement by the president of Texas A&M (not the Diversity Director — the President, who oversees 50,000 students, thousands of staff, and a few billion in buildings, labs, etc.) that he was declaring a “safe-space” on campus for all Aggies (students, profs, staff) + inhabitants of nearby towns who might feel endangered — so they would have a place to flee to when Richard gives a talk at Rudder Tower on Dec. 6th. Richard will be addressing a couple hundred, max., in a smallish conference room. On the other hand, Kyle Field, the safe space for people afraid of Richard, is by far the largest structure on campus, probably the largest structure between Houston and Dallas. ‘Course, everything’s bigger in Texas, even safe-spaces. (Sorry, I had to say that.)

I could go into a long rant at this point about how A&M used to be all male, used to be the most macho campus in Texas, used to be an island of sanity in an academic sea of madness, but I will spare you. I did take a Parthian shot however. This is the season when the DMN picks its “Texan of the Year” — it tries to make a big deal out of it, and invites readers to nominate worthy candidates and give their reasons.

So I nominated Richard Bertrand Spencer as Texan of the Year. I’m not sure he’s eligible, since he no longer lives in Texas, but if you measure the sheer hysteria he has caused, at least among the mothers and alumni of St. Mark’s, the Dallas Morning News, and one of the largest universities in the nation, he wins by a mile!