What it is Like to Teach in Failing Schools: A Memoir, an Inquiry and a Critique (2016)
by A. Teacher 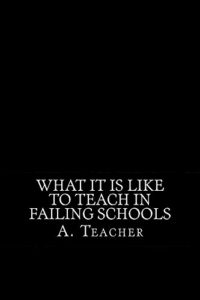 Even without the students present, a visitor familiar with middle-class White schools would notice that Atlanta’s “Fairfield Junior Academy” is different. Walking the halls he would observe that there were no lockers. “[W} e moved all the lockers into the classrooms because most of the fights and drug deals took place during transition time when students went to their lockers” (76). If the visitor was unfortunate enough to need the restroom, he might see “dried diarrhea on the walls and toilet in the bathroom stalls” (111). Venturing into a classroom he might encounter vandalized computers and locked file cabinets that had been broken into.

As the subtitle indicates, this book is part a memoir, part a scathing critique of the educational establishment that some call Big Ed. This reviewer has twenty years’ experience in secondary and tertiary education. Fortunately, I have not experienced many of the problems the author relates, at least not to the same degree. Thus some of the dysfunction A. Teacher (AT) describes is particular to his type of school — a failing junior high — while other problems are systemic and likely to be experienced by most public school teachers in America.

The reader might conclude from the opening paragraph that Fairfield in one of those neglected, underfunded minority schools one hears about. While it is a non-White school (70 percent Black, 27 percent Hispanic), it is not underfunded. “Our school was flushed with money” (12). There was plenty of technology — computers, iPads, smartboards, and printers in every room. There was also widespread theft and vandalism, plus poor maintenance of the facility.

American education is often top heavy with administrators. This is particularly true of urban schools. So, in addition to student misbehavior, a major complaint of Mr. Teacher was the reams of paper work and endless meetings his position required. These demands left little time for lesson planning, and made classroom management more difficult. Because every behavior issue needed to be thoroughly documented it was less likely a teacher would take action.

One way a bureaucracy insulates administrators from day to day problems is the put-it-in-writing strategy. A “Response to Intervention” form was required “to document every infraction a child commits, complete with where the incident took place, what preceded the incident, what the infraction entailed, and the consequences that followed” (89). Even with documentation teachers at Fairfield felt the administration did not support their efforts to maintain order.

If contacting a parent was required additional documentation was needed. Every phone call to a parent needed to be reported,

a task that takes forever because parents always provide us with wrong numbers or numbers that have been cut off, [this] necessitates me going to a secretary who is very busy and getting her to unlock the student’s records and pull all the numbers of the student’s Auntie, her baby-daddy, her social worker, etc. What if, after all that the numbers are still wrong? Then I get to document that the numbers are wrong on an electronic form and email it to the (1) School Counselor (2) Parent Coordinator (3) Team Leader of that student (4) Grade-Level Administrator. (19)

In chapter three AT adds a bit of levity to his grim tale with a description of some of the characters who teach at a school such as his: The Burnout, an older teacher who started teaching decades ago before the school went downhill, is now just hanging on until retirement. The Homosexual, for a variety of reasons some homosexuals are drawn to minority schools. The Criminal, “convicted of a professional violation or actual crime,” he could get hired nowhere else. The Great White Mother, is an upper-middle class missionary to the poor. The Pissed-off Black Woman, is usually large and loud. “You got a problem with being loud?” The Substitute, Black schools use a lot of subs. Subs are often “hopeless,” and teachers “have no sympathy” for them. The Born Housewife, wants to be a stay-at-home mom, but cannot afford to.  The Foreigner, usually eastern European or Hispanic, they do not know what they’re getting themselves into. The First- Year Teacher, has that “deer in headlights” look. Failing schools have a high turnover rate, and a disproportionate number of first-year teachers (24-44).

The author has contempt for most so called educational experts who often have little classroom experience. In one chapter he directs his ire at academic coaches. He compares them to the political commissars of the old Soviet Union. The job of an academic coach is to propagate and enforce teacher fidelity to the ideology and practices advocated by Big Ed. AT believes these coaches waste millions of taxpayers’ dollars, and thousands of hours of teachers’ time. Their main effect is to demoralize the faculty.

Mr. Teacher has three degrees related to education, yet he was treated more like a wayward child than a credentialed professional. “[I] was reviewed up to eight times [a year] by five different administrators (some were from the district office). These reviews [were] separate from the reviews I received from the academic coach which were weekly” (95). Despite receiving a “needs improvement” rating, AT “had the best class scores on standardized tests in Language Arts in the whole school.” Meanwhile his principal treated him with “disrespect and malice” (96).  When an employee is closely supervised, and has little or no autonomy, it is an indication he is not in a professional position.

The motif that Mr. Teacher paints of Fairfield Middle School is one of disorder and disregard for both persons and property. These characteristics were on prominent display at a dance the author chaperoned. Teachers at his school were required to monitor four extracurricular activities a year. Dances were considered the worst assignments.

This sort of behavior is an extreme example of a widespread problem. A. Teacher relates how even in places such as Gorham, Maine, schools have had to cancel dances due to lewd behavior. In other schools, where decorum is enforced, attendance at dances is way down because students cannot imitate the style of dancing they see via the mass media.

As mentioned above, failing schools have a high turnover of faculty. The same is true for administrators, and this exacerbates existing problems. Long-serving administrators “know what works and what doesn’t.” A certain amount of trust develops between faculty and administration leading to stability. Veteran teachers do not trust new administrators. When a new principal comes in he is likely to “repeat mistakes that have been made before” (77). A new administrator feels pressure “to implement change to justify his job” (78).

Throughout the book the author describes the extreme pressure he was under to achieve good behavioral and academic outcomes amid the violence and disorder. “The stress and fear I experienced mirror descriptions from warfare” (152). Part of this strain is the result of teacher bashing currently in vogue among some educational experts. Big Ed is desperate to close the racial achievement gap, and turn around failing non-White schools. Other remedies have not succeeded, so the fault must lie with the classroom teacher.[1] As one commentator put it, teachers today play the dual role of scapegoat and savior.

As with many erroneous theories, there is a kernel of truth in blaming the teachers. The classroom teacher is the most significant component in education. According to a Rand study: “When it comes to student performance on reading and math tests, a teacher is estimated to have two to three times the impact of any other school factor, including services, facilities, and even leadership” (80). The missing information is that between 75–93 percent of student success is attributed to individual and family factors (including genetic differences that affect individuals’ educability as well as his or her family environment via passive g.e correlations).

Because the school has little or no control over what happens off campus, they put pressure on the most important factor they do control — the classroom teacher. The higher turnover rate of faculty and administration in failing schools means they have a less-experienced staff.  Many of the most promising teachers transfer to better schools where their efforts are more appreciated; many of those who stay feel they cannot get a comparable job elsewhere.

Being part memoir, this book includes some personal information on A. Teacher, though the reader might wish for more. Obviously the author wishes to remain anonymous, so his biography is sketchy. The readers’ biggest question is why AT continued at a job that caused such traumatic stress that his health deteriorated and his marriage floundered? “I took up smoking. It helped. I drank profusely. . . I couldn’t sleep. I tried prescription sleep aids . . . they made things worse” (151–152). The author mentions a $120,000 mortgage, vehicle payments, a wife and two children to support, the fear of letting his students down, and being unable to find another job. His attorney advised him “to quit teaching. If only I had listened to him” (155). His wife demanded he get another job. Yet he persisted for ten years. What is he doing now? Is he still teaching? Did his marriage end in divorce? We do not know.