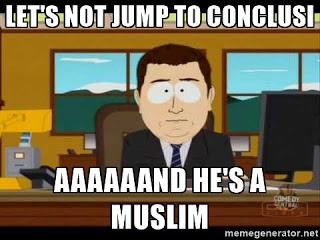 The BBC is the opposite of this meme.

Why, oh why is the BBC routinely called fake news these days? One of the main reasons is their ludicrously overprotective treatment of Muslims, which leads them down the path of ridicule, along the lane of absurdity, and into the parking lot of incredulity.

Everybody, including Joe Public, the BBC’s intended audience, knows that Muslims have problems fitting into the West, and that because of this a LOT of them are attracted to Islamic Jihad.

Usually, these types prefer guns and bombs as their passport to Muslim Nirvana, but Europe clearly saw this coming, and has imposed some pretty hard and heavy gun regulations (American gun lovers please remember this connection between a large Muslim population and the possible abolition of Second Amendment rights).

Because of Europe’s limited availability of firearms, jihadis have to be inventive, and the easiest way now to kill lots of kufars is to drive a vehicle, preferably a giant truck, into a crowd of innocent people.

Not surprisingly, when there is news that another vehicle has been driven into a group of people, the public automatically wonder if it is another Muslim attack. This is only natural, and it is something that people are wondering now about the attack that just happened in Heidelberg Germany, where one man was killed and two people injured (one of them a Bosnian women intriguingly).

Usually there is a bit of a gap between such incidents being initially reported and the identity and motives of the attacker being confirmed. During that time respectable news organizations tend to stick to the known facts and report nothing more, although they might point to a pattern of similar incidents in the past.

The BBC, however, before anything is definitely known, immediately tag such stories with four things that I have seen repeatedly in their reporting of attacks where the public has reason to suspect an Islamic-inspired attack.

Let us use this short update story from the BBC website as an example: “One dead, two injured in Heidelberg car attack”

First, they speak of death in the passive sense, not the active. Basically someone “has died” or “been hurt,” rather than someone “killed” or “hurt” someone, etc.

Second, unless there is clear and immediate evidence of Islamic involvement, they will include a statement of some kind saying there is no Islamic involvement. This is usually derived from an early non-committal police comment of “Um, don’t know yet, mate.” This is not so difficult to get, even in cases where Muslim involvement is obvious, because policemen nowadays can lose their job even for a true statement that might be construed as “politically insensitive.”

If it turns out that, actually, there was a lot of Islamic involvement, then this statement can easily be redacted, or the police blamed if need be.

Thirdly, they drop in the idea of mental illness, again well before there is any chance of anyone knowing about this. They usually cover this suggestion with weasel words or phrases, like “It is thought…” “It appears…” “allegedly…” or even the absurd “…unable to confirm that…” which, although technically negative, still manages to plant the thought in people’s minds.

Fourthly, before they or anyone else in the media can know this, they emphasise, that the perpetrator acted alone, also usually covering this assertion with weasel words.

In the BBC’s short initial web article on the Heidelberg attack, the junior BBC hack charged with penning this piece, who may or may not have acted alone, has stuck very closely to the guide book…or at least it is thought that he has.

“A man has died and two other people were hurt after a man drove into a pedestrian area in Heidelberg, Germany. The attacker, said to have been armed with a knife, was shot, injured and arrested by police in a brief standoff after fleeing the scene on foot. His motives are unclear, but there are no indications this was a terrorist attack, police say. In December an Islamist attacker drove a lorry into a Berlin Christmas market, killing 12 people and injuring 49. In Heidelberg the attacker, described as a 35-year-old German, drove what is thought to be a rental car into pedestrians in one of the city’s central squares, injuring three people. One of them, a 73-year-old German man, later died in hospital. The attacker then left the car but was tracked down, shot and seriously injured by police near an old swimming pool. Police were unable to confirm local media reports that the attacker was mentally disturbed. He is thought to have acted alone.The two injured people were a 32-year-old Austrian national and a 29-year-old Bosnian woman, police said. Their injuries are said to be minor and they have been discharged from hospital.”

Of course, this attack could turn out to be a non-Muslim incident, but that is not the point. The point is how the BBC clearly has a working methodology in place right from the start, designed to downplay any possible Muslim attack.

Addendum: The German police have stated that the attacker was a German of non-migrant background.