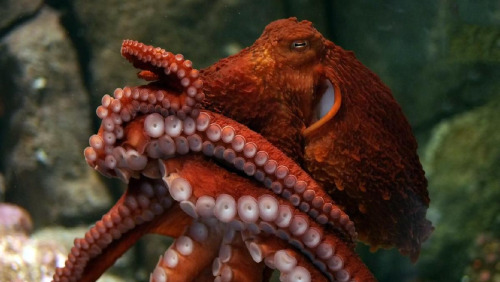 Octopuses can sometimes engage in self-cannibalism, eating their own arms in what is thought to be a stress reaction. What initially begins as a nervous biting of one’s own limbs, descends into frenzy, as bacteria take hold in the resultant wounds. As the infection spreads, and the stress levels increase, the octopus savages its own arms at a rate faster than it can heal, or grow new limbs. Survival in such instances is rare. There is only a terminal fate for a cephalopod in which such behavior has firmly taken hold.

Stress-related self-destruction is also relatively common among humans, and not merely in the obvious form of deliberate suicide. Melville captured it best with Moby Dick’s Captain Ahab, a figure so psychologically and spiritually wounded, so bitterly sensitive, that he would give his own life and the lives of others in pursuit of revenge — the only palliative he felt would appease his mental self-gnawing. Rebuking the admonishments of Starbuck, he cries with barely concealed anguish: “Talk not to me of blasphemy, man; I’d strike the sun if it insulted me.” Ahab’s insatiable hate for the white whale was certainly not intended as an allegory for the hatred felt by modern ‘progressives’ for the White man, and yet I feel that such a comparison is apt. These people will do anything to ‘strike the sun,’ to bring down their great opponent, and we may expect self-destructive behaviors to be an aspect of their maniacal pursuit of ‘Whiteness.’

The last few weeks have witnessed a couple of important instances in which the memes of ‘privilege,’ racism, and anti-Semitism, the chief intellectual harpoons forged to pierce the White behemoth, have been turned inward on those largely behind their construction. Very recently, England’s Bristol University has been caught up in a scandal after it emerged that one of its lecturers, Dr Rebecca Gould, who is almost certainly both Jewish and a ‘progressive,’ penned an article for CounterPunch in 2011 in which she argued that “Jews should stop privileging the Holocaust.” Given that such an argument simultaneously infringes upon several taboos, and thus casts Dr Gould into the nebulous category of a ‘self-hating Jew,’ it is a miracle that her career has managed to progress uninhibited for the last six years. Apparently the piece was only brought to light, and subjected to ‘social justice’ action, after one of her undergraduate students unearthed it and initialized a campaign against her.

One of the more amusing aspects of the affair thus far has been the intrusion of the cartoonish Sir Eric Pickles. Pickles, a former Conservative Party chairman and the UK’s ‘special envoy on post-Holocaust issues,’ is a pedigreed Shabbos goy with a reputation that is in equal parts defined by his frequent assistance to the Jewish community and by his frequent misuse of public funds. Pickles has carved out a career for himself by tabling new laws to counter a non-existent rise in ‘anti-Semitism,’ and in one of his more ridiculous pronouncements once stated that “without its Jews, Britain would not be Britain.” Since the last period in which Britain was “without its Jews” (1290-1656) featured, among other things the literature, art, and music of the English Renaissance, the establishment of the Church of England, the defeat of a Spanish Armada, and the beginnings of the British Empire, one wonders if Pickles knows anything about the nation he plays a part in governing. When not cheerleading for a tiny fraction of the British population, the porcine Mr Pickles has made a nasty habit of claiming over £60,000 from parliamentary expense accounts under the heading “biscuits, sandwiches, tea and coffee.” In 2014, Hilary Benn, shadow communities secretary, complained that: “Eric Pickles lectures councils about cutting down on hospitality, but his department’s food and biscuits bill soared by £45,000 last year.” 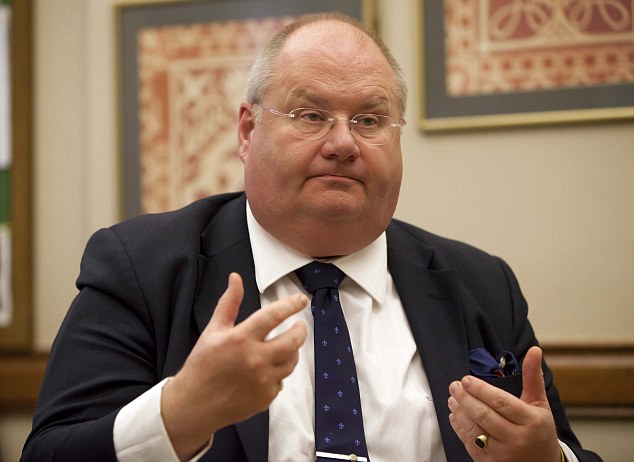 Never one to miss an opportunity to earn some brownie points with the Jewish community, Pickles has rushed to attack Miss Gould with all the vigor one would expect from the obsequious politician. In particular, Pickles has accused Gould of using the “language of Holocaust denial,” insisting that the case is “one of the worst cases of Holocaust denial” he has seen in recent years, and adding that Gould should “consider her position” at the university.

Pickles continued: “To describe the murder of six million Jewish people like this frankly beggars belief. I am all for debate and freedom and speech but this passes into a new dimension.” Pickles appears to have acted in tandem with the Campaign Against Anti-Semitism, a rather sinister organization that has called on Bristol University to dismiss Dr Gould. The Campaign Against Anti-Semitism is an obsessive and neurotic organization which places the authorities under almost constant pressure to increase securities for the Jewish population or, in its own words, “we hold the authorities’ feet to the fire, even taking them to court when necessary.” The Campaign Against Anti-Semitism has been holding the feet of Bristol University to the fire, and will presumably continue to do so until Dr Gould finds herself unemployed.

Gould’s original arguments are of course worthy of note. The academic has argued that the Holocaust narrative is “available to manipulation by governmental elites, aiming to promote the narrative most likely to underwrite their claims to sovereignty.” Gould goes on to say that casting the Holocaust as a “holy event” allows it to be used as a tool by the state of Israel to “whitewash its crimes. … Israel must find a way of not passing on the crimes the Nazis introduced into the world onto the next generation of its citizens. … Perhaps the time has come to stop privileging the Holocaust as the central event in Jewish history.”

It’s clear looking at these comments that they are fairly anodyne. Rather than arguing that Jews exert ‘privilege,’ or suggesting that the Holocaust narrative is itself a tool of privilege, Gould’s argument was merely that the Holocaust narrative was given pride of place in Jewish history and identity, and was useful to Jews and to the State of Israel in particular. Such comments are problematic to those at the core of the Jewish establishment because they acknowledge that Jewish influence/power and Jewish victimhood narratives are intertwined. By calling the latter into question, the former is placed in jeopardy. While there is nothing truly new here, the language and socio-political trajectory of ‘progressivism,’ involving terms like ‘privilege,’ is clearly unpredictable and uncontrollable enough to wound even those that wield them.

Another, even more pertinent, instance of the Jewish head eating the Jewish tail has emerged in France in what has recently been termed “the new Dreyfus trial.” Georges Bensoussan, a French Jewish historian, has been put on trial accused of committing a hate crime after implying that Arabs are “innately anti-Semitic” during a 2015 radio interview. Apparently referencing the work of an Algerian sociologist, he asserted that “in Arab families in France and beyond, everybody knows but will not say that anti-Semitism is transmitted with mother’s milk.” Bensoussan’s case has divided the French equivalent of the ADL, the International League against Racism and Anti-Semitism, or LICRA, which accused him of inciting racial hatred and independently initiated the criminal trial against him. Essentially, the division revolves around the oft-posed question of ‘what is best for the Jews.’

The trial is already pitting anti-racism activists against one another, including within LICRA. One of France’s most revered thinkers, the philosopher Alain Finkielkraut, resigned from its honorary board in protest over what French media are calling ‘l’Affaire Bensoussan’ … . Sammy Ghozlan, founder of the center-right National Bureau of Vigilance Against Anti-Semitism, condemned the prosecution as ‘shocking.’

In January, Finkielkraut announced he would be resigning from LICRA over its decision to pursue Bensoussan. He later stated that the move for criminal proceedings had “dishonored” LICRA, an organization he accused of “opting for inquisition” against Bensoussan. Finkielkraut continued: “I call on all activists, followers and sympathizers to draw their own conclusions [about LICRA] from this ignominy,” before calling the prosecution an exceptionally grave event politically, judicially and historically.”

The participation of LICRA in the prosecution highlights the increasing complexities that Jews will face as the vanguard of multiculturalism, in increasingly diverse nations that will play host to extremely volatile and ersatz ethnic alliances. In particular, Jews are caught between their strong desire to continue enabling the ongoing mass immigration into White nations of Third World, and often Muslim, populations, and their increasing fears surrounding their own group security. In this respect, it is interesting that LICRA initiated criminal proceedings against Bensoussan along with a co-plaintiff, the Collective Against Islamophobia. The Collective Against Islamophobia has been accused — including by LICRA itself — of issuing anti-Semitic propaganda against Prime Minister Manuel Valls, whose wife is Jewish.

The division over the Bensoussan case is thus an argument over which strategy or approach should take priority — the elimination of any hint of racial discourse in order to facilitate ongoing mass immigration, or ensuring the security of the Jewish population even if it involves the critique of migrant populations. Alain Jacubowicz, the current head of LICRA, made his priorities clear in an op-ed published earlier this month, in which he accused Bensoussan of “benefiting extremists” with his statement on Islam. By ‘extremists,’ Jacubowicz was undoubtedly referring to White identity groups, and more especially the Front National. Thus, even though Bensoussan’s comments may have been perfectly sensible in highlighting the threat posed to Jews by the Muslim population, his sin was in providing even the most tangential support to the interests of French Whites. Bensoussan, by way of response, wrote that the Front National was actually being fueled by “a denial of reality, a suicidal strategy of blindness and silence.”

What’s best for the Jews? They can’t decide, and they are biting themselves.