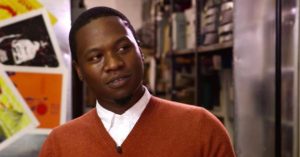 I don’t want to say that the revelation of the identity of the perpetrator of multiple bomb threats against Jewish schools, community centers and museums is “funny,” because of course bomb threats are nothing to joke about.  And if such threats were made by someone “on our side,” which is rarely the case, it would not do us any good in our eternal struggle against Cultural Marxism.   But we’ll have to admit that the whole affair is steeped in irony; and as usual, the MSM is left with some egg on their face (not that they would ever acknowledge said egg).

Let’s try to map out the sequence of events: “hate crimes” and threats are perpetrated against the Jewish community (but no actual bombs).  Outrage ensues and Trump is called upon to denounce these actions with just the right level of intensity. And his denunciation must be phrased with just the right words — because apparently we’re not even allowed to choose our own words anymore.

Somehow he is responsible, the media seems to suggest, because of the environment of rampant hatred that he has created.  While Trump has done nothing but lavish praise on Jews, the fact that he has hinted that not every last human being is a boon to America has seriously rubbed the Jewish community in particular the wrong way; and they somehow infer that this leads directly towards anti-Semitism and indeed, a holocaust.  Indeed, any hint of nationalism or populism is taken rather personally by the Jewish community, to the extent that they have identified members of such movements as dire political enemies.  As a result of this dialectic, they assume that they are in turn identified as enemies by followers of populist or nationalist movements, with a bit of psychological projection and paranoia in the mix.  In my opinion, this can lead to somewhat of a vicious cycle, to the point where these two sides may become enemies in fact, so that it is no longer a matter of paranoia and projection.

Trump, meanwhile, affirms himself to be “the least anti-Semitic person you’ve ever seen in your entire life.”  More media rage ensues.  Trump then suggests it might be some type of false flag (“Sometimes it’s the reverse”).  Even more media rage ensues.  On February 28th, Trump opened up his excellent Joint Address to Congress with a more full-throated condemnation of the anti-Semitic activity:

Recent threats targeting Jewish community centers and vandalism of Jewish cemeteries, as well as last week’s shooting in Kansas City, remind us that while we may be a nation divided on policies, we are a country that stands united in condemning hate and evil in all of its very ugly forms.  (Applause.)

Mainstream conservatives were gratified by this new obsequious tone.  But still no love was forthcoming from the MSM.  Shortly thereafter, the threats were confirmed as a hoax of sorts, and the Alt Right was vindicated (not to mention that Trump too was vindicated, at least in his earlier, more frank thoughts on the matter.)

Juan Thompson is perhaps the perfect foil for all that we have been preaching so patiently this last decade or two.  Can we not take some delicious satisfaction in how this all transpired?  The media was waiting anxiously for their great White defendant, drumming up this calamity of anti-Semitic incidents daily on NPR, et al, assuming the perpetrator to be a David Duke fan, perhaps a reader of the Daily Stormer, at minimum a Trump voter. And then…this guy.

Mr. Thompson simply made up quotes and stories in his career at the news website The Intercept.  As is often the case, his lack of a moral framework is accompanied by a low intellect.  The bomb threats were made to implicate his race-mixing, estranged White girlfriend, a scheme that perhaps only a low-IQ Black would attempt; but alas, he should stick with more straightforward criminal enterprises such as mugging, which requires less forethought and cunning.  He was discovered by the FBI.

Further indicating his sociopathy, Thompson also falsely claimed to be running for mayor at one point to solicit donations on GoFundMe, and railed against the “White liberal media.”  This is not even a matter of low IQ, or high-crime propensity; this is a disturbing disconnect from reality, and that special brand of malice such delusional individuals propagate

So how did the “anti-hate” Jewish organizations respond?  Of course Thompson was condemned by the ADL, but their statement was strangely qualified: “While I cannot speak about what is in Mr. Thompson’s mind or certainly in his heart,” and, “while the motive is unclear,” ultimately they deem that this was an anti-Semitic act.  That is as if to say, “this is not quite the perpetrator that we were hoping for, but we’re still not pleased with him.”

Back to Trump’s response, what is especially ironic is the pat on the back he received from Peggy Noonan over at the Wall Street Journal for his genuflections to political correctness and antiracism in his speech.  Note that this editorial preceded the FBI’s identifying Mr. Thompson as the one responsible for the anti-Semitic incidents.  It would seem that in Noonan’s eyes, this was truly the best part of the speech:

It was good that the president began the speech damning bigotry of all kinds: “We are a country that stands united in condemning hate and evil in all of its very ugly forms.” This is not a hard thing to do rhetorically, yet is always important and necessary, because it reminds everyone in this fractious, bubbling, stressed and many-cultured country that we owe each other respect and regard, not only tolerance but affection. We won’t continue as a people unless we get this right.

So in this increasingly racialized, “many-cultured country” we are supposed to love everyone and somehow pretend that we are a people?? A people? This is elite dogma on steroids. Despite the long and bloody history of ethnic and religious conflict around the world and despite the  obvious racialization of American politics, the left develops a utopian theory that America can somehow retain a national identity and that all conflict will magically disappear — despite the history of racial strife in America. The mainstream right is either too intimidated or too profit-minded to object, so we plunge headlong into a future that can only end in disaster

The president has taken to doing this lately. Why did he resist so long? Maybe in part because a man who believes himself unbiased will find it grating that others insist he personally, publicly, repeatedly oppose the ugly isms. Maybe he feels he has nothing to prove and suspects bowing to the demand is tantamount to conceding that he does. But Mr. Trump did have things to prove, because of the views of a highly vocal sliver of his supporters. In any case, presidents should say the right things.

That “highly vocal sliver of his supporters” with those deplorable views?  Yeah, that’s us, the  only people with enough balls to stand up to this absurdity.  Noonan is an eloquent writer, she has conservative instincts — although it would be hard to guess that  from these passages.   She goes on to hypothesize that nationalist movements need to tone it down in order to be more successful:

There is something the leaders of populist, nationalist movements here and in Europe do not understand. They are not powerful, because they are perceived, on some level, by some people, to be racist or narrow or anti-Semitic. They fail to win power—they have low electoral ceilings, or fail to win half the votes—because of this perception. It doesn’t help them, it kills them. Because the majority of people don’t like the smell of sulfur.

Nationalists should actively and publicly reject and rebuke the forces of darkness. “We need them to win”? No, they’re the reason you lose. They’re not numerous, they’re only loud. Draw a line between them and you, raise your ceiling, get yourself a chance at winning. Which, if you are serious about your programs, vision and philosophy, is the point.

Completely left out of this is the constant chorus of propaganda in the media and the school system since World War II characterizing nationalism and populism as the epitome of evil, even without any explicit racial analysis and even with vehement denials of anti-Semitism. The smell of sulfur is imputed by the media and the educational system.

If Ms. Noonan’s goal is to further the electoral success of nationalist parties, this advice has already been taken. The main nationalist parties in Europe already reject ant-Semitism, are staunchly pro-Israel, and have eschewed any kind of explicitly racial analysis — Geert  Wilders and Marine Le Pen are good examples. They are vilified nonetheless simply for wanting to end immigration. Exactly what  kind of nationalism are we left with if we can’t exclude such people?

But doesn’t the revelation of Juan Thompson as the perp throw cold water on Noonan’s analysis vis-à-vis the importance of denouncing bigotry?  After all, said “bigotry” was essentially a hoax; therefore, the nature of this perceived problem is different.  Must we continue to “repeatedly oppose the ugly isms” as our core mission, when, as it turns out, it was a wayward Black, typically anti-Trump in his orientation, who caused all this mischief in the first place?  If anything, and I hate to say it, this incident has confirmed all of our “ugly isms.”